We may not know all the words to our national anthem (and some even deny the existence of a second verse). We may have less respect for our politicians than for a skunk in rehab. But there's one grand tradition for which us Aussies do hold national pride: we know how to put on a good BBQ! So, to celebrate this momentous day — when, 220 years ago, an English dude landed on our beloved soil, whacked a Union Jack into the ground, and promptly impaled several tribes' worth of Aborigines upon it — the Aussies of Ko Tao pulled out the grill and sizzled up some sossies. The fine folks at Chopper's (the one-and-only Aussie bar on the island) offered a free BBQ for 2 hours this evening: all you had to do was purchase a beer, and a generous plate-full of meat 'n' salad was on the house. Aus-tra-li-a, F$#% YEAH!! 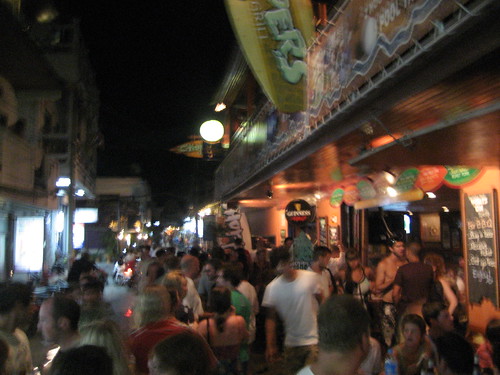 Queue for the barbie at Chopper’s. 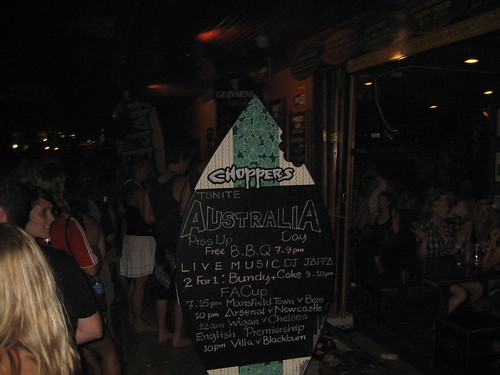 In case you failed to notice: they’re giving away food tonight.

The BBQ was a mean spread: juicy steak; fat sausages; fresh salad; chunks of bread; and bucketloads of condiments. Don't get me wrong, Thai food is amazing: but after two weeks of nothing but rice and noodles, a good hunk of meat was very welcome. Chopper's was absolutely packed with Aussies this evening — we were the majority here by a long shot — and most of 'em were going absolutely mental, as well. Air-guitarring on table-tops, rugby-scrums on the dance floor, and beer-spilling to the horizon: if this was a bar back home, then half the patrons would have been booted out in no time; however, the largely Thai staff were excessively tolerant, and just kept cleaning up and smiling amidst the yobbery. They were also playing a smashing selection of Aussie live music downstairs: the Akka-Dakka and the Midnight Oil songs drew cheers that could be heard from space; and let me tell you, hearing Khe Sanh on Oz Day in Thailand was an experience not to be forgotten. 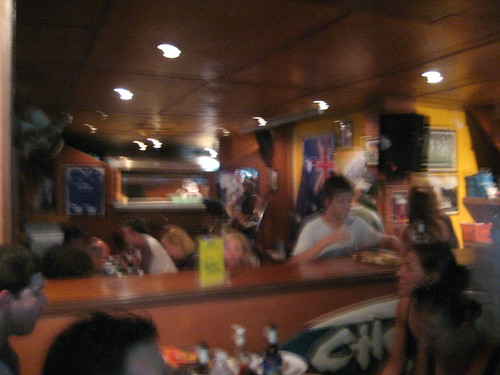