First ever day of snowboarding

I'm staying here in Bariloche for a full week: and from today until next Saturday, I have seven days to spend on the snow at nearby Cerro Catedral, one of the biggest ski resorts in South America. Now, as anyone who's been to a ski resort in the past 10 or 15 years should know, these days skiing is only half the fun on the mountain. The other half of snow-goers are now ditching their skis, and doing snowboarding instead. I've only ever been a skier up until now; but this week, I'm trying snowboarding for the first time. Today was an interesting day: very slow, and very sore; but fun nonetheless.

The day began a bit later than planned — after the midnight steak and wine last night, I needed a good long sleep — but hey, here in Bariloche, a bit late is always too early, and there's no such thing as being too late. After waking up to breakfast and a view (both to die for) here at Patanuk, my first task was to go and find some clothing to hire. Sylvia (from Patanuk) recommended a shop called Erni, which is here in town, all the way down the main street, in a shopping centre called Galeria Del Sol. The nice lady at Erni fitted me into a set of snow-worthy jacket and pants, which I took on a 7-day hire.

Next task was to find, and to catch, the public bus that runs from Bariloche up to Catedral regularly, all day every day. I managed to find the bus stop: but I must have just missed a bus, because I was waiting half an hour for the next one. Anyway, I've heard a few horror stories about the bus up to the mountain: but really, it wasn't that bad. Maybe it was just because it was Sunday, but it wasn't too crowded, or too slow. And it is very cheap: only 3.50 pesos each way (about $1.10). You can get a shuttle bus, that picks you up from your hostel each morning: but that's 20 pesos a pop, and skiing/snowboarding is expensive enough, without adding luxury costs like that on top.

Once I got to the mountain, I found it to be an overcast day, but no worse than that weather-wise. Most lifts and runs open, and everything looking dandy. The place was also pretty packed with people: Catedral is a really busy resort, even in September! Apparently they get quite a big crowd at the start of September, as they usually get quite a lot of fresh new snow, later in the season. So much for my grand plans of coming in September, and "avoiding" the peak season crowds. Honestly, if this is what Catedral is like at the end of the season, I'd hate to see the place in July. You must spend all day just waiting to go up one chairlift, if you come at that time. 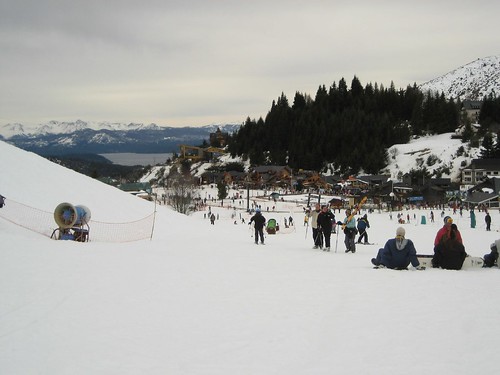 The first thing that I had to do, upon arriving at Catedral, was to find a snowboard and some snowboarding lessons. I'd heard that you can get some good lesson and board hire combinations: let's just say that the lesson situation here isn't exactly what I was hoping for; but anyway, more on that later. For now, suffice it to say that I did find such a combination, from one of the schools. I also had to buy a weekly lift ticket, from the ticket office here on the mountain: more on the funky tickets later.

I had my lesson, and then I had another two hours or so in the afternoon, to practice my extremely basic new snowboarding skills. After one afternoon of snowboarding, I can now confirm that everything I've heard about beginning this sport is true. The first day really hurts! My knees, wrists, and ass are black and blue, from bearing the brunt of violent stacks, over and over again. Stacking it is about all you do, on the first day of snowboarding. I can also see why more broken wrists result from snowboarding, than from virtually any other activity on the planet: every time you stack it (i.e. every 30 seconds or so), your gut instinct is to stick your hands out, to brace you against the fall. And when you do this, its your wrists that end up absorbing the impact.

After one afternoon on the board, I can now "boardplough" down a very easy slope, and do something approaching a rudimentary turn. Really small steps — I think it's gonna be a long week. But already, I'm starting to see how this can be a fun sport, and why more and more people are doing it every year. 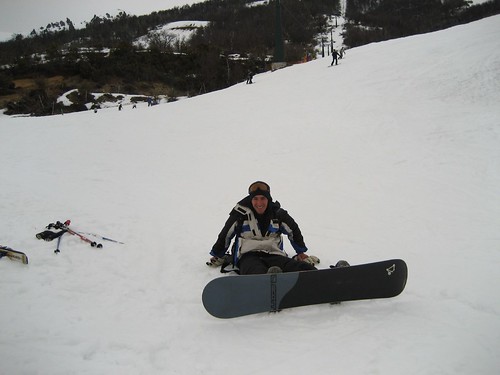 Yours truly, with my hired snowboard.

Dear Liam: I'm sorry, mate — I know how anti-snowboarding you are, and I remember all your criticisms about how snowboarding requires less skill than skiing, about how snowboarders %$#& up the snow with their boards, about how they're all tools who just wanna look cool doing fancy jumps, etc. But you know, I also think that you shouldn't really criticise something until you've tried it. So I'm trying snowboarding, and I'll see if all the arguments against it are true or not, and I'll decide for myself whether it's better or worse than skiing. And hey, you always gotta try new things, and keep on learning and growing in life, right? Anyway, at this stage I don't really see myself becoming a permanent snowboarder; but it can't hurt giving it a try.

Yer yer i know I tend to give snowboards crap,
When I was ski instructing early this year I did give snowboarding a go myself.
Despite my best effects I still hurt my ass and wrists!
After 3 hours I could do some basic linked turns on green runs.
I have to say it was fun, I tried jumping after 2.5 hours! :D
I could see it would be something I could give a go more, but skiing is my love!
I still give snowboards crap for going down slopes they can’t handle, mind u skier do it as well but I find it is more dangerous to others with snowboards.
esides I had to keep up the crap to maintain the stand off between ski and snowboard instructors. :) And of course I have to state for the record that telemarking skiing is better than all of the others. LOL