I really should stay longer here in Pai. It's such a nice place. Anyway, despite the great friends that I've got here, and despite the urging of said friends for me to linger, tonight was my final night here: what can I say, except "the south is calling"? This evening, I enjoyed a delicious Thai curry for dinner with Sonny (can't remember the name — but it's one I've never had before), while the two of us engaged in our final heated political debate. Then, it was back to the sewer bar: it left such a good impression on us last night, that we just had to return for more.

Tonight at the picnic benches, I opted for a flask of Sang Som whisky instead of beer (can't stomach that Chang crap two nights in a row); and we got acquainted with a few of those sad individuals who've been stuck in Pai for waaay too long: among them, a photography-mad Californian etymologist, and an overweight Israeli transsexual (calling him/her a ladyboy would be an insult to his/her Thai brethren). Plus, we munched on yet more late-night street-cooked roti; and we discovered where the sewer bar's toilet is — just turn right, keep walking until you're away from the street lights, and the bushes are on your left :P. 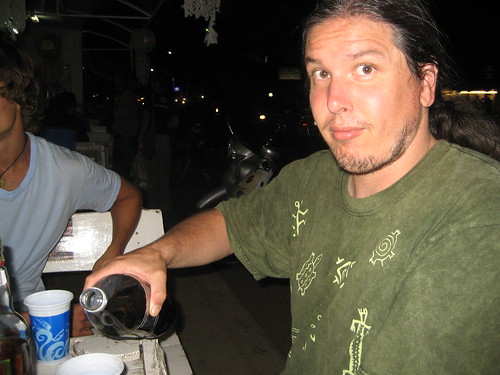 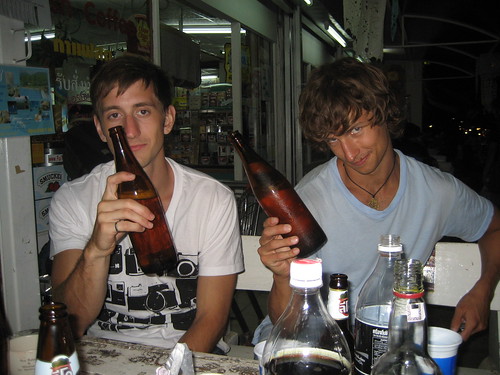 My final night in Pai unraveled pretty similarly to the previous two nights here. Once again, we the crew migrated from the sewer bar down to the Buffalo Exchange, where they had the usual arrangement of bar-inside campfire-outside in place. I had a great chat en español, with a Spanish couple that was sitting by the campfire — always good to practice ye ol' Spanish, even when relaxing in sunny Thailand. From the Buffalo, we rolled on to a new joint: a place outside of town called "Be-bop", which was packed full with patrons, and which boasted a spectacularly awful live band. I continued to avoid the dreaded Chang beer at this place, and to keep chugging on my trusty flask of Sang Som instead. I eventually crashed back at my new pad, after hitching a terrifying late-night ride on the back of a crazy Englishman's motorbike — absolute miracle that either of us survived the ride.