Climb every mountain, do every tour

Follow every strudel, don't resist the lure. When you visit Salzburg, you're visiting the home of "The Sound of Music", one of the most famous movies of all time. And whether you caper, cringe or cry out at the thought of doing anything so cheesy as the official SoM tour (I still haven't decided which I should do), the fact remains: you know you wanna do it, and you know you gotta do it. Today, Lisa and I fulfilled our solemn duty, and hopped along for the ride. It certainly was cheesy, as well as more than a little lame; but it was also a fun, colourful and song-filled day.

When we jumped on the bus, at 9am this morning, we were the first two on board. This was a little disconcerting, but it was also a false alarm: because 5 minutes later, the full-size coach was down to standing-room only; and before long, no less than two full bus-loads of us were chugging off on the morning's tour. I originally signed up for the tour all by myself, but I convinced Lisa to come along last night (sadly, nobody else was shameless enough to be persuaded): and I'm glad I had some company for the day, because we mainly had families and older couples for company on the bus.

I can't remember the name of our tourguide, but I doubt I'll ever forget the name of the bus driver: Christian. Our smooth-talking, cliché-riddled host cracked a joke every 5 minutes or so; and invariably, every single time, the butt of the joke was poor old Christian. I can only assume that Christian doesn't speak any English. If he did sprechen, then surely he would long ago have cracked, and have driven his steering wheel smack into his taunter's midriff. Either that, or he simply gets paid a lot of money to shut up, to drive the bus and to get made fun of, every day of the week.

Our first stop on the tour was the famous house on the lake, where they filmed that unforgettable scene in which the boat tips over, and in which Maria and all the Von Trapp children soak themselves silly. Although I must say, it was rather hard to imagine the scene today: not only was the air super-cold and the forest snowed-over; the lake was also completely frozen. Incredible: first time in my life that I've seen a frozen lake! 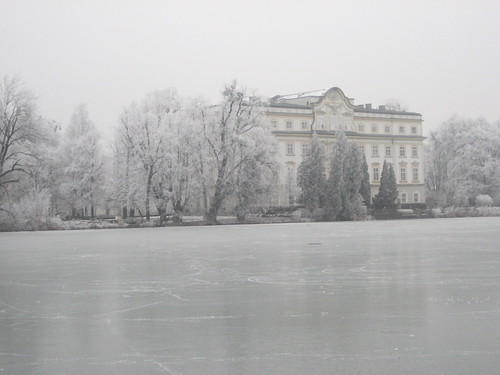 House on the frozen lake.

I could barely believe my eyes, when I saw a group of locals ice-skating on its smooth surface: apparently, the lake hasn't yet been officially declared "safe" to skate on for the season; but the locals are already prepared to try their luck. Of course, Lisa wasn't impressed at all by it: she was just bloody cold, and unable to comprehend my state of winter-wonderland elation. Ah, all ye of the cold places of the world: you understand not what it is to be Aussie, and to dream of frozen lakes and frosty fields, as Swedish people dream of being black and hairy. 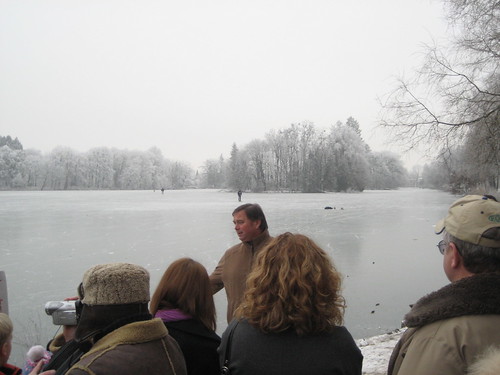 We had an Aussie family of four sitting behind us on the bus: husband and wife, along with a boy and girl of about 3 years old each. The kids were sweet enough — although I made the mistake of saying hello to them as soon as they got on, and of encouraging them right from the start to expect fun and games during the ride. As such, whenever said kids felt just a tad bit bored, they felt perfectly entitled to poke, prod, pull and jab us as a relief outlet. Anyway, could be considered a form of charity: we certainly provided some free babysitting for the parents.

The highlight of this tour (in my opinion) was not the sights, but the sounds. And to hear them, all we had to do was sit on the bus, and listen as they played the entire movie soundtrack, from beginning to end. I was a bit disappointed with the sing-along effort: most of our comrades were apparently too shy or too dignified (dignity — PHAH!) to let it rip; although there were a few exceptions. I, for one, sang at the top of my voice whenever I felt like it, no matter how pathetically poorly I remembered the lyrics, and oblivious to the psychological trauma that my voice was inflicting on my neighbours. Honour: wish you could have been here with me — you would have been proud, and I know you would have done the same! 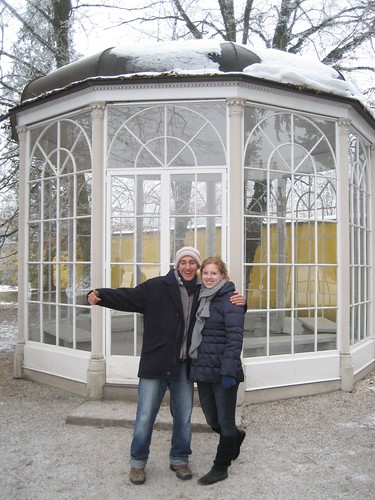 You are 16, going on 17: the famous gazebo from the movie, although it’s since been moved from its original location.

As we drove through the highland Alps around Salzburg, we passed by some gorgeous scenery. All around us, we saw snow-covered fields, whitened forests, and wooden hamlets nestled snug against towering mountains. We saw the international headquarters of the world's favourite energy drink — Red Bull — which is apparently an Austrian company, and which for some strange reason has built its large and expensive head complex way out here, away from any large cities that I'm aware of. We stopped for a few minutes at one particularly scenic spot, where a village, a valley, and a cradle of mountains all came together under the snowy sky, in perfect harmony. 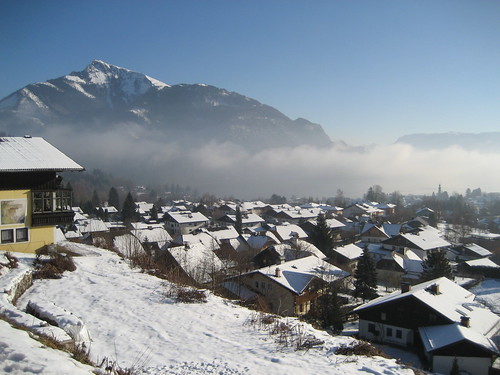 And they have a whole country full of scenery like this?!

At around midday, we reached the longest and the most important stop of the day: the village in which can be found that famous church where they filmed the wedding scene. I didn't hear them singing "How do you solve a problem like Maria" in the church; but walking inside this gorgeous yet pokey building did remind me of the answer to: "how do you solve a problem like a multi-million dollar movie and a small church". And the answer is: special effects. Apparently, even in 1965 they were tech-savvy enough to be able to take the middle portion of the church, and to "repeat" it, thus effectively "stretching" the building by several times its true length, and creating the illusion that this rather cosy affair was a long and crowd-accommodating cathedral. Which it's not. It's a beautiful church, but it's no Notre Dame! 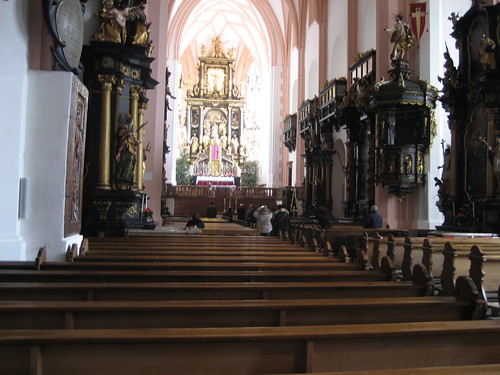 The church in which the Von Trapps (supposedly) got married.

The Sound of Music may be a Hollywood movie, but it is actually based on the true story of the Von Trapp family, and of their escape from Austria at the onset of WWII. However, Maria and the Baron did not get married in this church — they were married elsewhere. Naturally, there are pleeeenty of liberties that Hollywood took, with regards to "bending the truth" — and one of the claims that they make, on this Salzburg tour, is that they'll show and explain to you "the real Von Trapp story". Which they do, to some extent.

For example, contrary to the movie — where the Von Trapp family climb over the Austrian Alps on foot, and escape to Switzerland — today I learnt what really happened. They actually caught a train, and they caught it to Italy. And from there, they continued west through Europe, and eventually arrived in the USA — where they lived happily for the rest of their days. Oh, and by the way: Salzburg is also on the German border, not the Swiss border; so if they had climbed the nearby mountains by foot, then they almost certainly would have been going exactly the wrong way. The Swiss border is about 400km from Salzburg, and it's Alps almost the entire way there: so if they had walked to Switzerland, and if they had climbed every mountain... well, as our tourguide said: "think of poor little Gretl!"

But I digress — pardon me. So, after paying our respects to the church, we did what our tourguide recommended all of us do, and dined on some delicious apfel strudel for lunch (one of Austria's hallmark dishes). It was an appalling ripoff — and our tourguide no doubt received (at the least) a free one every day, for his promotional services — but it did taste pretty good. Lisa and I strudelified with another couple from our hostel: an Aussie girl and an American guy, who were on the second bus. I also introduced Lisa to the wonders of Glühwein, at the town's obligatory Christmas market.

We were in the "wedding town" for an hour or so; and after that, it was a long and sleepy ride back to Salzburg. I half-dozed most of the way; although I woke up when the soundtrack "greeted me" with my favourite of all the songs from the movie: Edelweiss (by the way, it really is the national symbol of Austria, as well as a very popular brand of beer). The final song that they played on the bus — before we arrived back in Salzburg — couldn't have been less anticipated or more cheesy, even if they'd SMSed us about it 10 minutes prior, and served it on crackers with Jarlsberg: "so long, farewell, auf wiedersehen goodbye". 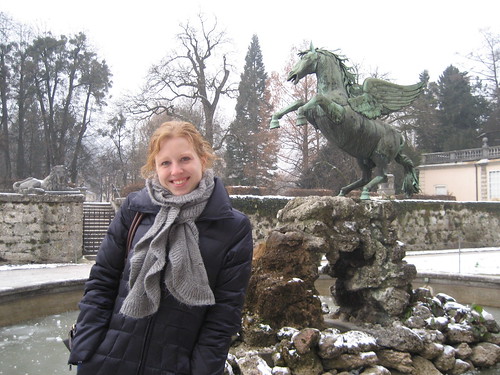 End of the tour: Lisa by the famous fountain.

The tour ended with us getting dropped off in the middle of town, right at the famous fountain where the main "do re mi" sequence was filmed. Once again: in winter time, it didn't look so familiar to me; but it looked stunning nonetheless. The tour was much what I expected: filled with song; overflowing with bad jokes; and brimming with trivial sights and trivial facts, that I'm not nearly a big enough fan of the movie to truly care about. However, still very much worthwhile.