I've done some pretty crazy and exciting adventure activities during my trip — but never before have I done anything quite like canyoning. Canyoning is a sport that basically involves abseiling down through waterfalls. Baños, with its verdant hills and its roaring waterfalls surrounding it in abundance, is an ideal place to do it. This afternoon, Patrick and I spent over 2 hours at the Río Pastaza — just 10 minutes out of town — trying out the falls there. Quite scary, quite cold, and quite wet. But very fun, and the experience is simply spectacular.

We went on our canyoning expedition with one of the many tour agencies in town, that offers it 7 days a week. Along with our fearless instructor, we were a group of four: myself, Patrick, and two Swiss guys. The tour consisted of rappelling down through three waterfalls, with the first one being the easiest, and the one where we practiced and got the hang of the basics. 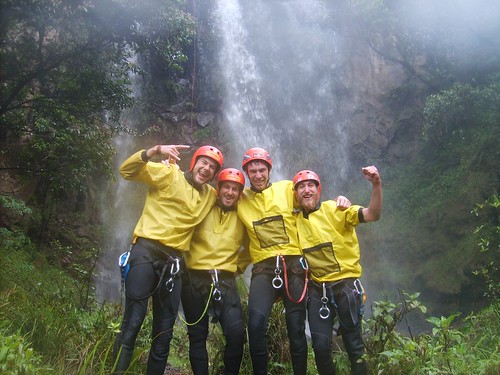 Our group, at the bottom of the falls, and decked out in our canyoning gear (wetsuits, jackets, sailing shoes, helmets, and harnesses). Left to right: the two Swiss guys, Patrick, and myself. 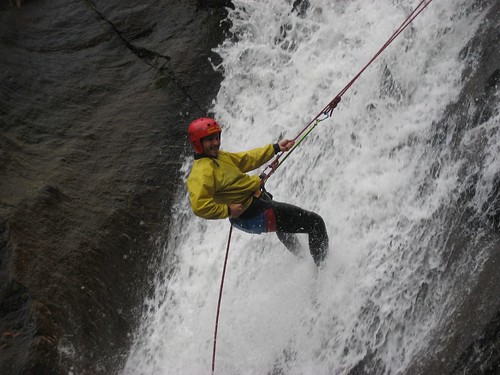 One of the Swiss guys, abseiling down through the first waterfall. 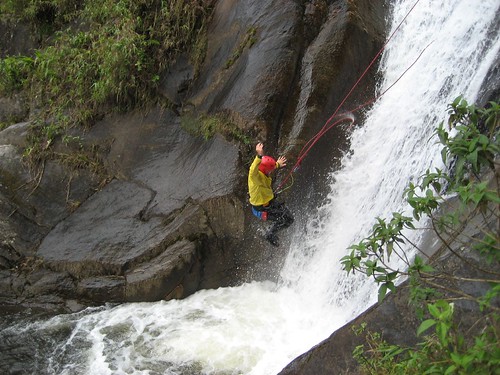 Once we were 2 or 3 metres from the bottom, we freefall jumped the rest of the way, down to the pool below. 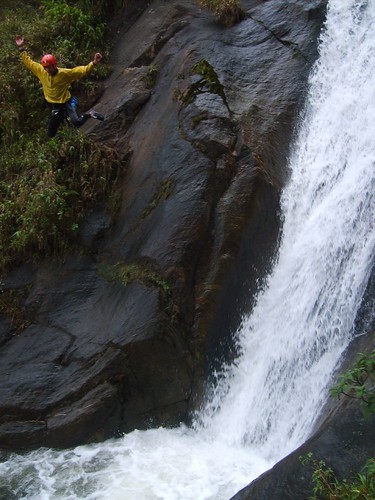 After we finished rappelling the first waterfall, we took turns jumping off the rocks on the side, and plummeting down 10 metres into the pool. This was really scary: took some coaxing before I was brave enough to do it! 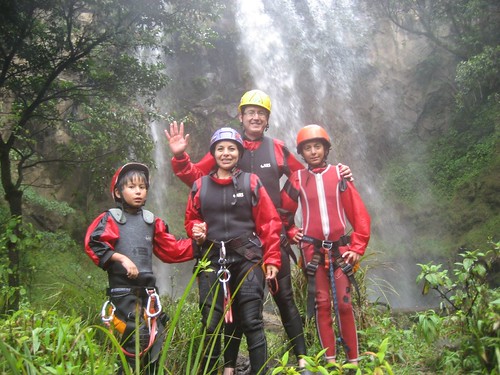 Ecuadorian family (on vacation from Quito), who came canyoning with us. Apparently, they’ll let you do it even if you can’t swim: they just attach more ropes to you, so they can pull you out of the water!

The first waterfall was really fun, and it was where we learnt how the whole canyoning thing works. The second waterfall was similar, except that it was a bit shorter, the rocks were a bit more slippery, and the pool below was much shallower (which meant that we couldn't jump straight off the top, and kamikaze into it). 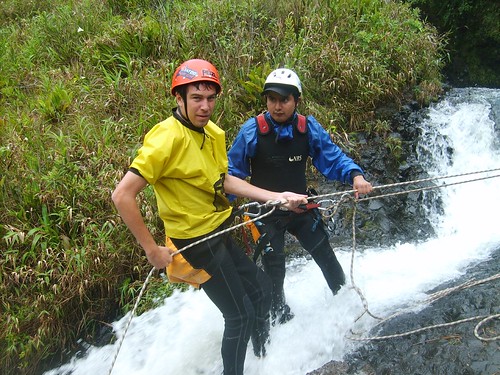 Patrick and the guide, at the top of the second fall. 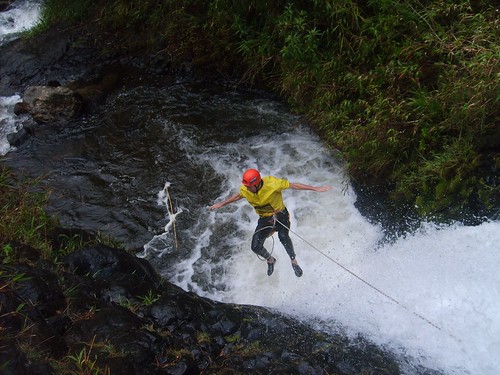 Patrick jumping into the pool below the second fall.

But when we reached the third waterfall, we realised that the first two were just kiddy stuff. The third one was what canyoning is all about: over 40 metres tall, with an almighty torrent of water showering down in a solid wall, and with lush jungle all around. It was actually much easier than the first two — since once we were over the lip of rock at the top, we just floated down on the rope — and it was also absolutely stunning. I've never been so dazzled in my life, as when I eased myself down through this monumental cascade, with the water pouring down all around, above and below me. 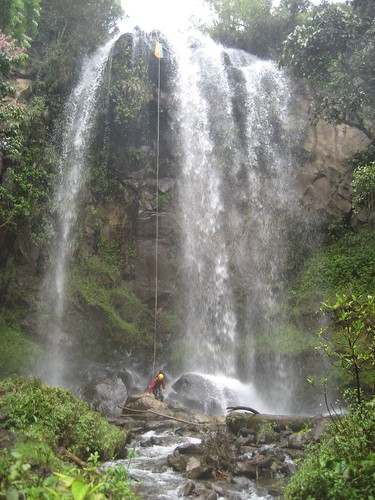 The third and mightiest of the waterfalls. 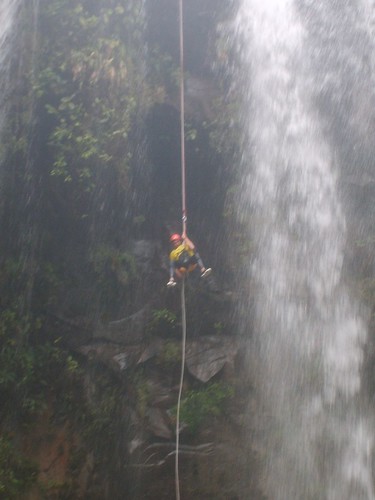 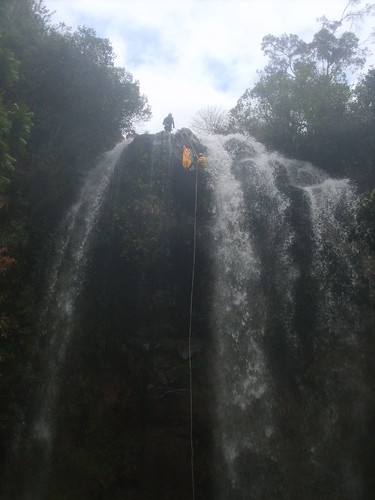 The drop at the top.

These were an amazing and adrenaline-filled two hours of my life. Canyoning is a crazy thing to do, but it's really fun, and the views that it gives you mid-fall are mind-boggling. I highly recommend it to everyone who doesn't mind the occasional jump off a cliff, and who isn't too fussed about getting soaked with freezing mountain water.

The only problem that we had, on this tour, was that the agency stuffed us around a bit. We paid them a bit extra, and they were supposed to take us to a bigger set of waterfalls, where we could abseil down a 60-metre drop — the biggest canyoning trip in the area. Unfortunately, we didn't end up going to these falls, and we went to the standard 40-metre drop ones instead. I think it was because the Ecuadorian family turned up at the last minute, and they weren't up for doing the really big falls (and they wanted to put us all in one group).

Anyway, the agency gave us back the extra money that we'd paid, and they apologised for the confusion. And we sure as hell didn't let that spoil the day: because the canyoning that we did do was still more than worth the money.