This morning, I just managed to fit in two things that I really wanted to do, before leaving London. I visited the British Museum — one of the largest museums in the world, holding some of history's most famous artifacts — and I caught up properly with Jack (as last night, the music and the beer were so good that we didn't have a chance). I'm very glad that I've done both those things: although really, one morning in the British Museum is a bit of a joke — you could wander around it for a week, and still only see a quarter of it.

The British Museum is a lovely building, with a front entrance that could rival a small Pacific island nation, and with a variety and a quality of exhibits that boggles the mind. Also — and this came as a pleasant surprise — the place has also apparently been "free to the public since 1753" — so there's no entrance fee; all that they ask is a small voluntary donation. I met Jack out the front of the museum this morning, and we went inside for a wander.

One of the most prominent exhibits in the museum, and perhaps the most famous as well, is that of the ancient Egyptian hieroglyphics. In particular, the BM is home to the Rosetta Stone, a piece of heavily-engraved rock which is considered to have been the critical key in deciphering all Egyptian hieroglyphs. As such, it's a very historically significant, and a very valuable artifact! 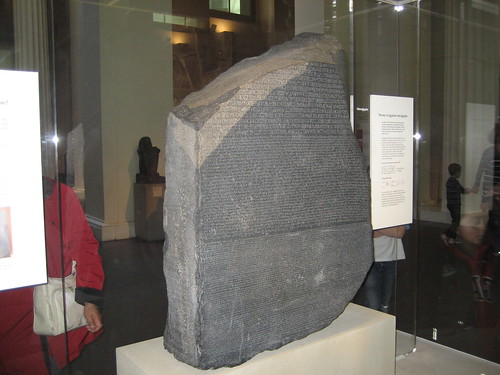 The Rosetta Stone, key to a wealth of knowledge about ancient Egypt.

Jack and I explored the hieroglyphs section, as well as a little bit of the Assyrian, Akkadian, and Persian sections. Then, we went upstairs to one of the museum's other famous exhibits: the Egyptian mummies and sarcophagi section. 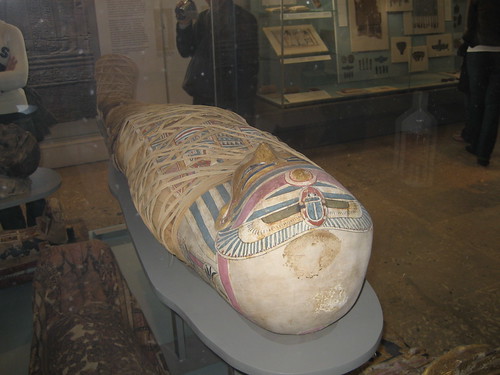 Egyptian mummy, still all wrapped up. 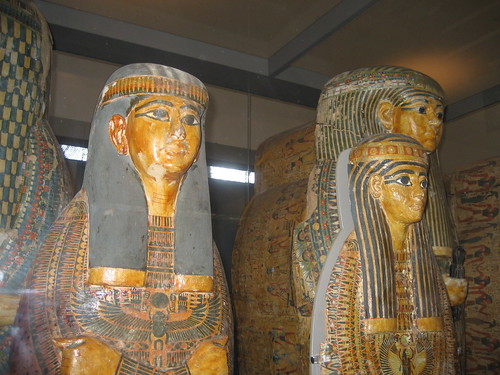 Ancient sarcophagi, heavily engraved and carved to represent the people inside them.

Now, there's one important question that you may be asking yourself right now: why is all of this stuff in the BM, in England? Shouldn't it all be in its various countries of origin — in particular, back in Egypt? Well, the answer to that is simple: over the years, the British Empire has used its great power and wealth to obtain a great many things that don't really belong to it. Some things were bought legitimately, others were taken by force, and yet more were smuggled. However they were acquired, though, the fact remains: these things don't really belong in England, they belong where they were found!

Unfortunately, the sad fact is that the BM is an enduring example of the British Empire's legacy of exploiting and plundering from the rest of the world, whenever it had the chance throughout history. So, if for nothing else, visiting the BM is a great opportunity to see one of the world's best examples of a large collection that doesn't, in all fairness, have the right to be nearly as large as it is.

As well as exploring the halls and the many exhibits, this morning's BM visit was also a great chance to catch up with Jack. The two of us had a good 'ol chinwag while we were wandering around the place — and since our round-the-world adventures have been so similar so far, we had plenty to talk about. Pity that we have to part ways again — but hey, it's a big world; and we can't expect to be in the same parts of it all the time.

that's where I worked

I worked in Museum Street for a year when I lived in England in 1982 and the museum was at the end of the street.