Another day, another landslide

Unless we're just having really bad luck on this hike, landslides must be as common as Llamas here in Peru (and that's pretty common), because we've just encountered two in two days. However, yesterday's encounter — on the way to Santa Teresa — was nothing compared with today's, on the way to the Hidro Electrica. Today's was big, it was dangerous, and there was no getting around it. Uh-huh, es correcto: today we had no choice but to walk through a landslide.

This morning's walk was probably the easiest leg of the Salkantay hike we've completed thus far. It wasn't too long: about 3½ hours. It wasn't too steep: basically gentle uphill all the way. And it wasn't too rough: nice, wide, fire-trail type road most of the way. Scenery was a mix of scrub, light jungle, and some river.

We even crossed over a brand-new steel suspension bridge, as part of this morning's hike. The dust was still settling on the floor of this bridge, that's how new it was. It looked very out-of-place on an unsealed dirt road; but maybe they're planning to seal the whole road soon. It was the first time I'd walked on solid concrete for several days, and it felt ridiculously easy and springy to walk on. 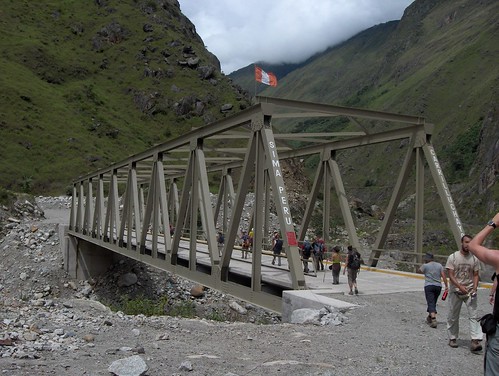 We were almost at our lunchtime destination of Hidro Electrica, when we encountered the landslide. We saw a titanic mound of rock and dirt, bulging out from — and totally covering — part of the mountainside, and well-and-truly blocking the road. We could see where the road continued on the other side, but we sure as hell couldn't see an easy way across. 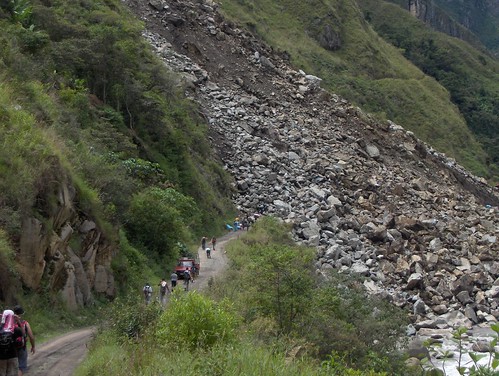 That's why, when we were told that there was no other way forward except through the landslide, we all thought (and said) "WTF? ...". It looked suicidal. I ate a banana, and I realised that it might be the last banana I would ever eat.

But when the guides and the porters started unloading the truck, and started scampering through the rocks to the other side — taking many kilos of bags and equipment with them, no less! — we knew that they were serious. We had to go through as well. 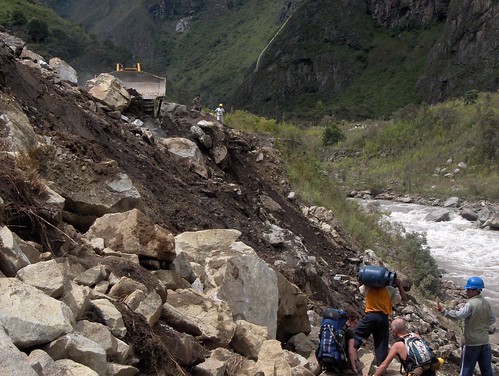 As with the journey in the dark — that some people took the night before last — it wasn't fun, and it wasn't safe. But we all made it, thank G-d. The rocks were fairly big, and they seemed to be held in place for the moment, so it wasn't too hard to jump or climb from one to the next. But at one point, a giant boulder about 10m uphill suddenly came loose, and came crashing down the mountainside, about 5m ahead of my position at the time. Had I been just a bit further ahead, I would have been someone's pancakes for breakfast the next morning.

It took quite a while for everyone and everything to get across, mainly because the emergency workers were only letting a few people across at a time. And it was these workers that I really felt sorry for. They were operating a bulldozer with a big shovel on the front, and their job was to drive right under the barely-holding mountain of rocks, and to clear away the landslide. At any moment, all day long, an avalanche of rocks could come crashing down on the bulldozer, squashing it to a pulp. 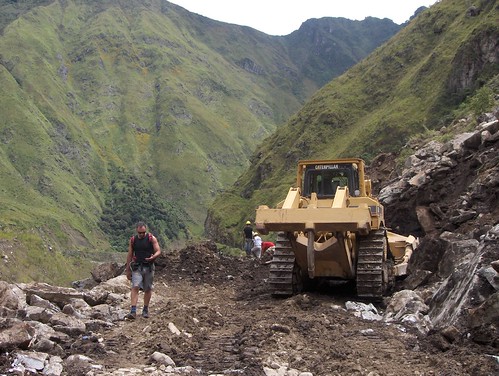 Quite possibly not in full accordance with Australian OH&S (Occupational Health and Safety) standards.

And because this is Peru, they're probably getting paid peanuts, and supporting a family of 6 kids each. 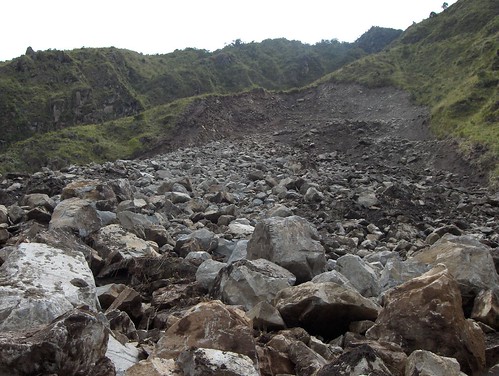 Anyway, once we were all through the landslide, it was literally only another 5 minutes to the entrance gate for Parque Nacional Machu Picchu — where we all had to sign the register, and to present our passports — and to our lunch spot of Hidro Electrico, where we rendezvoused with the train tracks to Aguas Calientes, and where we had a nice spread.

Really Jeremy, if you think you're going to be crushed in a landslide go for something decadent like chocolate!!!