This evening in Pilcopata, we were wandering around the main (and only) street of town, when we saw an ambulancia parked in the middle of the road, lights blazing and loudspeakers blaring. The driver was saying through the loudspeaker that they were offering Yellow fever vaccinations to the locals, on-the-spot, and 100% free of charge. As Pilcopata is on the edge of the Peruvian jungle, I guess it is technically a Yellow fever endemic area. Great to see that they're making a real effort to try and curb the prevalence of this illness, and to protect the locals from contracting it. 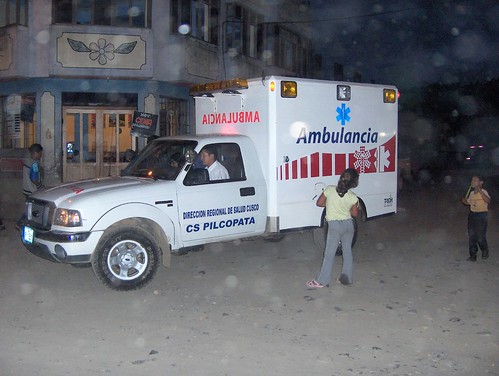 The Yellow fever van in Pilcopata.

The ambulancia appeared to be there purely on behalf of (and funded by) the Peruvian government. However, I find it hard to believe that the government is really conducting this program out of the goodness of their heart. They have a track record of consistently neglecting and under-funding the communities in the jungle, and I don't see why they'd suddenly change their ways. No doubt, they're receiving funding from some charity group such as the UN WHO. Anyway, regardless of who's paying for it, it's great that it's happening. I, of course, already got my Yellow fever vaccination before I left Australia, so I didn't need to get a shot here; but plenty of locals were going up to the van and getting immunised.