You can't go to Rome and not visit the Pope, can you now? Today, with the weather unfortunately still grey, and with nothing more pressing on my itinerary, I went and visited the Vatican. The Vatican is a ridiculously crowded attraction — it's clear that everyone, without fail everyone, who visits Rome pops in to it — but it is nevertheless very moving and very imposing. Didn't see the old man himself, but apparently he came out for a public appearance yesterday — pity I missed that, although apparently the crowds yesterday were even worse.

My Vatican visit began in St. Peter's square, the sweeping main entrance and open plaza that is the front of the complex. The square wasn't full this morning: but it's quite awe-inspiring to picture it as it's often shown on TV, absolutely chockers with people come to see the pope, for when he appears on the balcony and gives the masses a wave. 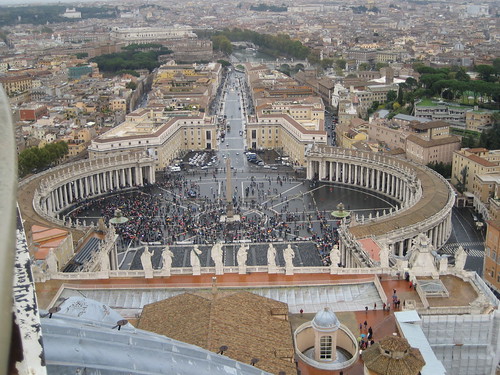 View of St. Peter’s square from on high.

From the square, I joined the long queue to get inside the Vatican itself. The queue kind of splits once you get through the main security gate, and it's a bit confusing which queue you should actually stand in — especially if you have no idea which part of the Vatican you wish to see first. Anyway, I ended up stumbling into the queue for the Tombs of the Popes, so that's where I ended up going first. 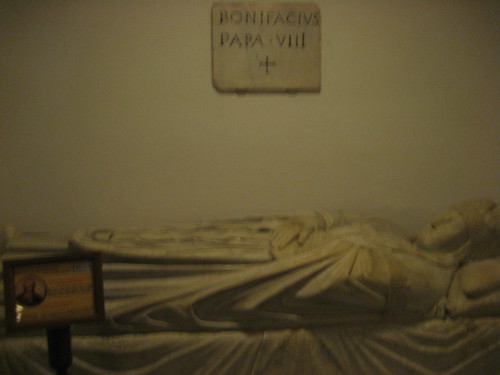 Tomb and coffin of a long-gone pope.

The Tombs of the Popes is a very solemn place, as it's where a great many of the popes throughout history rest in peace. The tourists are by-and-large quite dignified and respectful; ironically, the loudest and most aggravating thing is the voice that comes on the loudspeaker every minute or so, and that says in 5 different languages: "this is a sacred place; please be quiet and refrain from photography". The tomb of the late pope, John Paul II, is by far the most popular in the complex: when I walked past, there was a big group of people kneeling and mourning before the coffin. And so it should be, too: he was a great man, and he deserves all the love that people give him, even in death. Couldn't get a photo around his tomb — way too many mourners vigilantly preventing tourists from doing this.

Next, I joined a new queue, and I found myself climbing the 500 or so stairs to the top of St. Peter's Basilica. With the basilica, you have a choice of either skipping the first 200 stairs with an elevator trip (extra cost), or of just taking all 500 stairs on foot — naturally, being young and fit and parsimonious, I chose the latter option. It's a fair hike to the top, but it's worth it once you get there: the views of Rome from atop the dome are incredible. 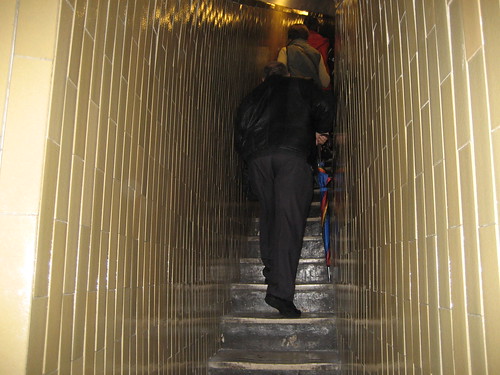 Lots of stairs to get to the top of the Basilica — sometimes very narrow ones. 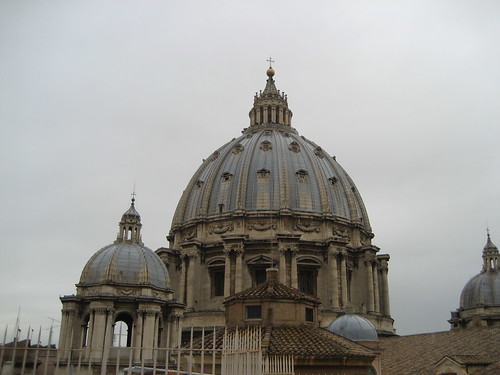 Main and lesser domes of the basilica. 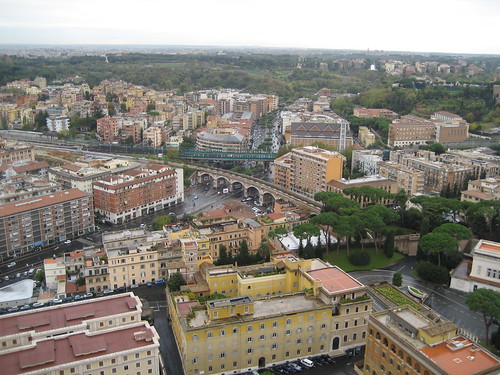 Panoramic views of Rome from the top.

Finally, from the top of the dome, I descended back down, and found myself in the Vatican church itself. The main church is quite a dazzling sight to behold for the first time: it's simply so incredibly lavish, and so ornate! Every corner, every nook and cranny, every surface of its vast floors, walls and ceilings seems to be utterly covered in paintings, carvings, sculptures, and fine works of rock and metal. It blows the imagination to guess at how many thousands of talented artists, how many millions of man-hours, and how many trillions of dollars of wealth are contained within that one holy space. I shouldn't think that there's anything else in the world to match the Vatican church, as far as sheer over-the-top decadence goes. I also hate to think just how much wealth the Vatican has taken from various groups over the years, and of how much it now holds. 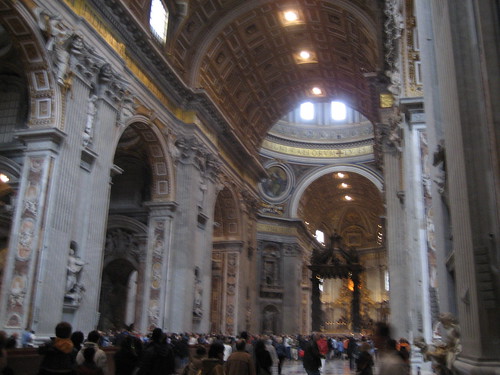 Main hall of the Vatican church. 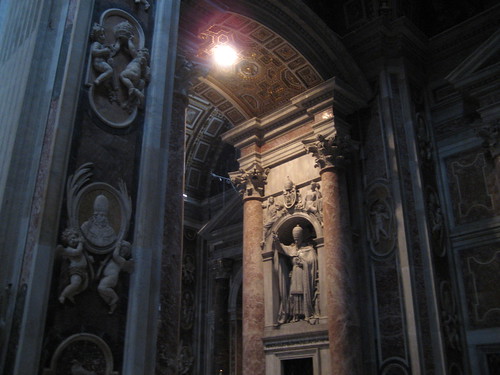 This arch alone must be priceless.

As a Jew, I couldn't help but feel at least a tinge of hostility towards this complex, and towards the institution behind it, during my visit to it. After all, for centuries on end the Catholic church has persecuted and slandered my people, it has killed and plundered, and it has done much (on many occasions) in the effort to turn the whole world against us. However, these feelings could only surface so far: because despite its shameful history, you can't help but go into the Vatican, and notice first and foremost the thousands of loving and good-intentioned Catholic pilgrims who visit it every day. You look at these people, and you realise that both the layfolk and the clergy of the church — as with those of any religious institution — they always have been, and they always will be, kind and loving and tolerant at their core. Sure, the church has been misguided as hell more than once: but its basic message is one of peace and love; and the vast majority of its adherents wish nothing but just that — peace and love — upon all of humankind. And I find it very hard to feel hate in my heart against something like that. 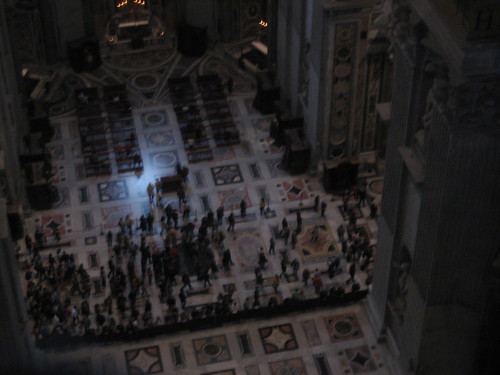 Catholic people assembled in the church, for the All Souls' Day service.

Sadly, I was unable to visit the Vatican Museum and the Sistine Chapel, which are apparently some of the real highlights of the complex. As this is All Souls' Day, the museum and chapel are closed all day. Anyway, maybe I'll be able to get in tomorrow — we'll see how it goes.