The fourth day of the Santa Cruz hike was a short but interesting one, as well as being very scenic. Spent all morning continuing to hike down through the Huaripampa river valley; then I reached the teeny mountain town of Vaqueria, and from there caught a combi over to Llanganuco. I've reached the road, now: so I could have just gone back to Huaraz tonight, thus resulting in my skipping the fifth day of the hike; but why would I wanna do that? Still way too much fun to be had. 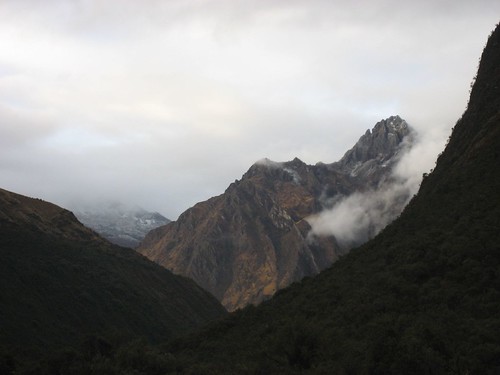 Beautiful misty morning at the camp of Paria.

Woke up to some gorgeous surroundings this morning, in last night's campsite of Paria. No more rain: but misty clouds were hugging the looming mountains all around, and looked very beautiful indeed. Said goodbye to the rag-tag group that I'd met and camped with last night, packed up, and I was on my way. 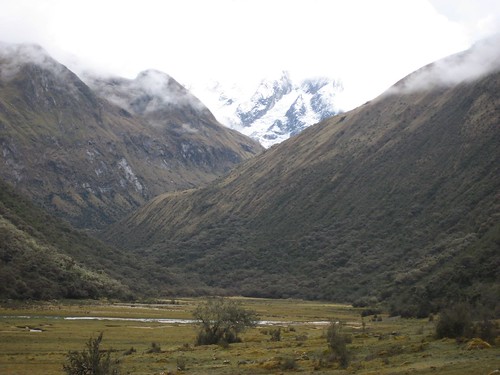 Heading further down the Huaripampa river valley this morning.

Well, what do you know: I was no more than five minutes into my morning's hiking, when I once again bumped into the French group from yesterday! They had camped nearby to Paria, and just happened to leave at almost the same time as me. So, I walked with them for the whole morning — most of the time, talking to my mate Christian. The scenery became even more gorgeous as the morning went on, and as we got out of the wilderness part of the trail, and started getting through some highland farming areas. 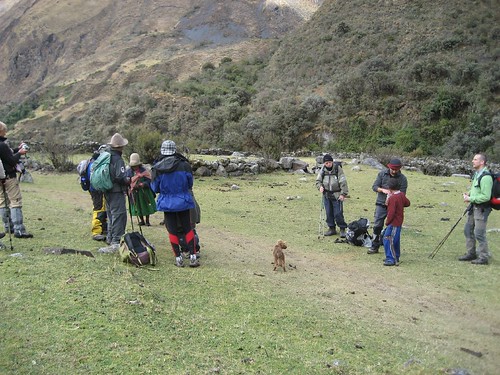 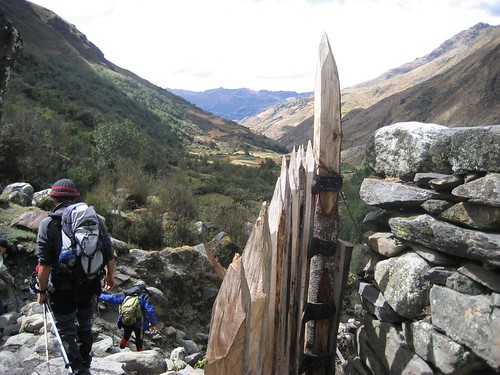 Gate onto the farmlands.

Got through the farmland, and arrived at the small town of Paria (different to last night's campsite, of the same name), by about 1pm. We had been taking it very easy: I would have done it much quicker, except that I decided to take the relaxed pace of the French group, since I had no hurry today. They had a very experienced tourguide, who was stopping them all the time to explain various bits of flora, fauna, and culture along the way. Plus, they liked to just stop and have a break fairly often.

I said goodbye to my French friends at Paria, where they had a set lunch prepared for them, and a minibus waiting to take them to the town of Mancos (near Yungay), where they were to spend the night. This was the end of their hike.

As for me, I continued the short distance up the hill, to the town of Vaqueria. Didn't really see anywhere to stop and have lunch, and I was starving: so I squatted in the shed of some random Peruvian farmer, on the side of the road, and feasted on my rice-with-mushrooms-and-chili lunch (leftovers from last night) right there. Luckily, nobody saw me and decided to get out their shotgun. Not that I think farmers have shotguns around here: not quite as crazy a part of the rural world as, say, Texas. :P

Got up to Vaqueria, which is a tiny place, with only about 5 or 6 buildings. After a wait of about 20 mins, I jumped on a combi, and completed the journey of an hour or so (along the bumpy mountain road) to Llanganuco, which is back on the other side of the Cordillera Blanca (i.e. the side that I started on, and the side where Huaraz and everywhere else is). Hopped off just before Llanganuco itself, and found my campsite for my 4th and final night here in the mountains. It's called "Cebollapampa" (lit: "onion plains"), although I didn't see any onions growing there. Didn't smell too bad, either. Strange name. 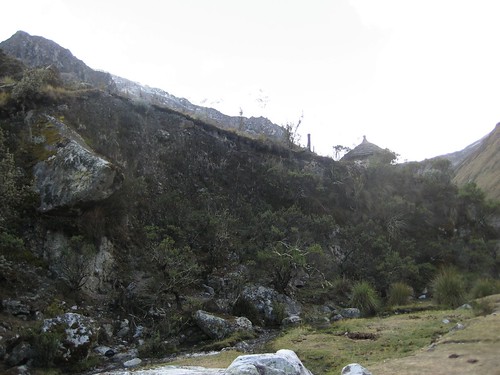 Cebollapampa, it turns out, is the base camp from which to go both to the Pisco high camp (for the adventurous mountain-climbers heading to the 6000m peak of Pisco), and to the famous "Laguna 69", where I'm headed tomorrow. Tonight, I camped next to a crazy mountain-climber called Jared, from Colorado (like he hasn't got enough insane mountains back home, eh?), who's on his way up to do 10 days of (solo!) mountain-climbing around Pisco. Apart from us, it was a big, big campsite, with not that many people around.