This morning's ride — both parts of it — was one of those times that really tests you. If you want to do something big, you have to expect to be challenged at some points — and in my big Sicilian ride, this was one of those points. Part one of the ride was a battle against various odds: rough and confusing roads; a cold battering wind; and angry roadside dogs without relent. Part two was simply a question of pure, uphill determination: the ascent to the mountaintop village of Erice, located 750m asl, was not for the faint-hearted. But I endured, and I persisted, and I told the dogs where to shove it; and I made it through. And proud to have done it, too.

Erice is a small village that overlooks the coastal city of Trapani, and Sicily's west coast; and if you're in the area, it's not to be missed. For reaching Erice today, I had two choices route-wise. I could return back to Segesta, and get back on the main SS113 highway, which would take me straight to Trapani. From there, I could take the difficult sea-facing road up the mountain to Erice. Alternatively, I could cut north to the SS187 — via minor country roads — and from there head due west, approaching Erice from the back, and taking the inland-facing road up the mountain instead. I chose the latter.

The "cutting north to the SS187" part, as it turned out, was not fun. The only town along the way was a teeny place called Bruca; and the roads through Bruca were poorly signposted and difficult to navigate, even with my excellent map. The roads were also the worst I've encountered so far in Sicily: they were bumpy most of the way; and were completely unsealed in some parts. So much for all Sicilian roads rocking — these ones positively sucked a$$. It was also a cold ride, and that accursed wind (that hasn't left me in peace for about 4 days now) was battering me still.

Plus, to top it off, the poorly-fenced farms along the way were rampant with aggressive dogs, and every single one of them growled and barked their heads off at me! I've had dogs voicing their opinion at me intermittently, for the whole Sicilian trip so far (apparently, dogs were born to hate anyone who gets around on two wheels — it ain't just postmen); but today's bunch were by far the worst I've encountered. I'm usually a fan and a big sucker for dogs — having grown up with the world's No. 1 dog (in adorability, not intelligence) for a pet — but this cycling trip is starting to change that. Country dogs are a lot less friendly than their suburban city counterparts.

Once I finally reached the SS187, I was feeling quite drained. It was time for the morning coffee break; and the standard croissant ant hot choc, at a bar along the highway, did wonders to calm my nerves. Once on the highway, the ride was a lot easier: I still had bad wind against me; but at least it was fairly flat, and at least the road was properly sealed once again.

I reached the town of Valderice at about 11am. Whereas the western foot of Erice's mountain is home to the sprawling peninsula city of Trapani, the eastern foot is home to Valderice, which is just a little village. Once in Valderice, it wasn't too hard to find the road that I sought: that is, the inland-facing road up the mountain. I could see the mountain clear as anything, right in front of me — and I could just make out the mist-shrouded Erice atop it — and I was dreading the obviously tough ride up it. But I steeled myself, and began the ascent. 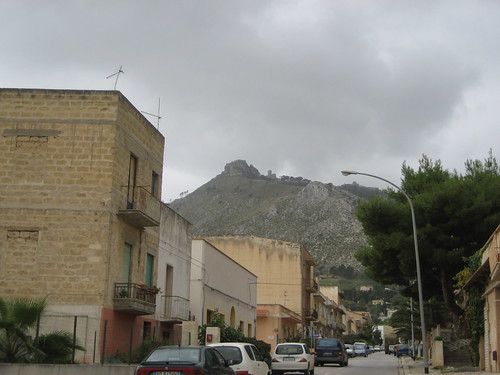 From Valderice, the mountain looms ahead.

The ride up the mountain was pretty much what I was expecting it to be: bloody hard. But the fact that I was so aware of what lay ahead, did seem to make it a bit easier — you don't have to be Einstein (Epstein will do :P) to figure out that cycling from sea-level to 750m up is going to be a bitch. All up, the mountain road took me about an hour to conquer. It really wasn't too bad: it wound around a lot and wasn't that steep anywhere; it was a smooth road, and almost bereft of traffic; and I was largely protected from the wind that had plagued me all morning. But yes, I did ask myself (at roughly 30-second intervals) why the hell I was doing such a crazy and gut-wrenching ascent; and it was one hell of a relief when I reached the top. There were also lovely views most of the way up: I couldn't see Trapani; but I could see the coast north of the city, which is beautiful and which stretches into the misty horizon. 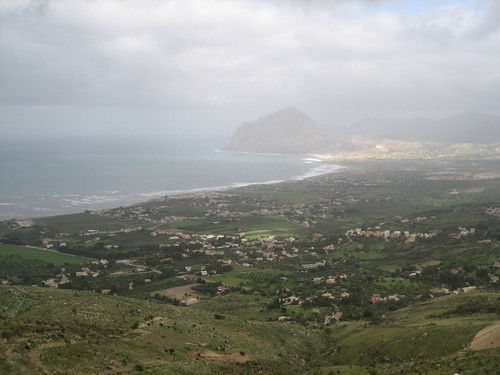 View going up the back road to Erice.

Erice is notorious for being a mist-shrouded village, and today was no exception. I'm sure that the views from the top are fabulous on a clear day — but I doubt that you get one of those very often. I discovered that there's a chairlift going all the way up the mountain, from Trapani to Erice; but it's not operating at this time of year. I also discovered, upon rolling into Erice, that it's bloody freezing at the top! Even though my massive ride up the mountain had warmed me up considerably, it only took 5 minutes in Erice for me to hurriedly don my thick fleece jumper, my beanie and my scarf. 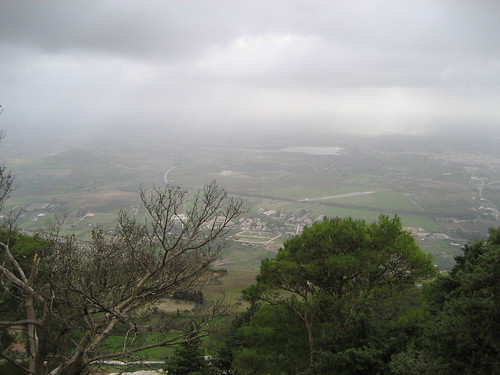 Misty view down from Erice.

Erice is a very quaint village, if just a little quirky. Its narrow streets are all cobbled, and cobbled roughly. Centuries-old churches are crammed amidst tiny houses, hole-in-the-wall shops, and mysterious shuttered-up buildings. The main street through the village is for the tourists: a succession of cafes, chocolate shops, small hotels, fancy restaurants, and souvenir booths are stretched out along it, from one end to the other. I guess a fair few people stay in the village for a day or two — personally, I wasn't so impressed with it, that I desired more than the half-hour or so of time I spent in it. Nice place, but weird and touristy; and like I said, freezing cold as well. 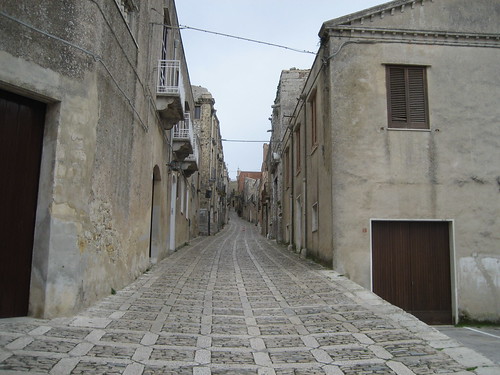 I descended Erice's mountain by way of the other road — the coast-facing road down to Trapani — and boy, I'm glad I didn't go up this one! Lots more traffic, lots more wind, and lots more steepness. Even going down it was difficult: it was awfully cold, and I had to brake hard the whole way — my hands almost froze. But the views were spectacular. And by the time I reached the bottom (and got plunged straight into the big-city mayhem of Trapani), it was nice and warm and wind-free. 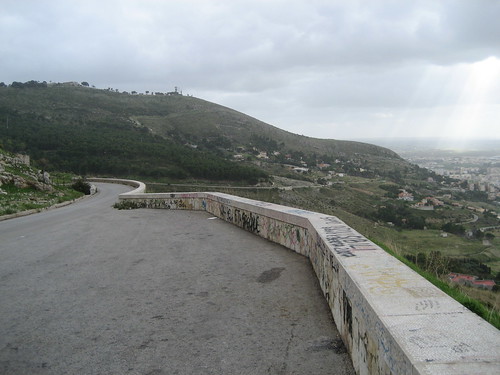 Heading down to Trapani.

I didn't hang around in Trapani at all: I just rode down the main boulevard towards the city centre for a few minutes, until I spotted the turnoff south, that got me on the highway out of town, and south down the coast towards Marsala. A tough as hell morning: but the final descent was a cool reward; and the day post-Trapani was a (refreshingly gentle :P) breeze.