Today was goodbye to Salzburg, goodbye to Yoho, and goodbye to some very good friends. But it was not goodbye to Craig, Sarah and Kade: because they too said goodbye to all this; and together, us four Aussies hopped on the train to Kitzbühel. Destination: winter wonderland, Austrian Alps. Mission: have a white Christmas, spend a week carving up the mountains, and engage in some serious après-ski. All that stood in our way: a mere 2-hour train ride. Easily tackled.

We cut it a bit fine. We were aiming to catch the 12:30pm train from Salzburg to Wörgl (where we had to change for the Kitzbühel line). But we didn't leave Yoho until about 12:15pm; and we ended up jumping on the train literally about 1 minute before it departed. Anyway, at least we made it.

Once we were on board, we found the train to be absolutely packed: in the carriage that we were (initially) on, the passageway was clogged beyond hope with excess passengers. I've never seen anything like this on a European train before! Seems that the trains become very busy indeed around Christmas time. Most people were shlepping a mountain of ski gear with them, as well: so clearly, we weren't the only ones that were headed to the resorts. There was absolutely no chance of getting a seat at the rear end of the train (where we started): not only were none available; but it was also all reserved seating (and we had no reservations). We had to hike all the way to the opposite end of the train, before we found the non-reserved seating area, and where we were able to make ourselves comfortable. 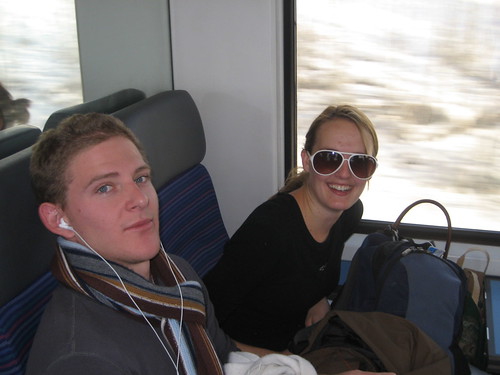 Craig and Sarah, nice ‘n’ comfy on the train.

The train ride from Salzburg to Wörgl wasn't very long, but it sure was scenic! I managed to enjoy a fair bit of the scenery, although I also dozed off for some of the way (that would be on account of last night :P). Seems that gorgeous, mountainous, snow-covered landscapes are simply a given, when you catch a train anywhere in Austria. Boy, what a hard life they have around here. 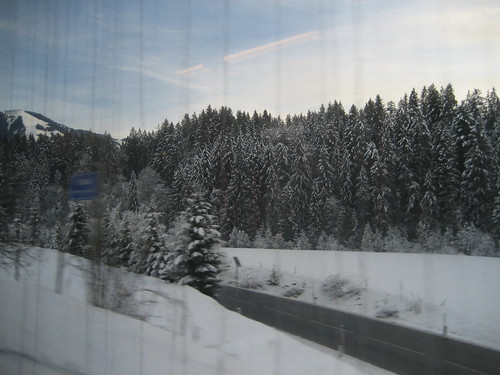 Looking out the train window.

Kade took a video, so I felt I had to take one too.

We were meant to reach Wörgl by 2pm; but owing to the crowd of passengers (and to some delays on the tracks — heavy traffic, I guess), we got there about 15 minutes late. As such, we missed our connection to Kitzbühel, and had to wait in Wörgl station for the next train (which wasn't until 3pm). Not the end of the world, though: it at least gave us a chance to grab some lunch; fortunately, they had some massive pizza slices for sale in the station, and that was just what the doctor ordered for all of us.

The local train to Kitzbühel was a quick ½-hour ride, through yet more gorgeous Alpine highland. Although Kitzbühel is about halfway between Salzburg and Innsbruck, it's on a secondary regional line, and so express trains don't pass through it — hence the change in Wörgl. We saw several small ski resorts along the way to Kitzbühel, with chairlifts going up from the valley floor to the nearby snowy peaks; and we also saw people skiing across snow-covered farmland, apparently as a means of personal transport.

It was a joy to arrive in the teeny Kitzbühel Hahnenkamm train station, where it's all so small and old-fashioned that the track simply cuts through the main road up to the gondolas (with level crossings at the intersections). Kitzbühel's a beautiful, quaint old ski village — although it's getting ridiculously ritzy and upmarket these days — and it was a welcome relief from all the bigger towns and cities I've been frequenting of late. We wandered through the main street of town, and had no problem reaching the hostel.