My hostel, The Generator, advertises a free tour of London, that's meant to leave from the hostel's reception at 10am daily. This morning, seven of us (including myself) turned up at 10am for the tour: we waited for about 45 minutes, but no tourguide showed up! Kwap. Apparently, the tour actually leaves from Monument tube station, further downtown; but someone is meant to come to the hostel, and take the daily Generator group down to this station. Whoever was meant to do this today, they clearly shirked out on their responsibility. We finally gave up, and went to Monument station ourselves — but by the time we arrived, the tour groups had already left. So it was time for a day's guide-yer-bloody-self tour of London.

We lost four of the original seven — two went ahead of us on the tube, and another two decided to bail out and do a bus tour instead — but Yves, Vicky and myself stuck together, and stuck to our plan of doing a walking tour of the city. We ended up still having plenty of daylight left (and what a sunny day it was — much nicer than yesterday!), and we managed to fit in plenty. 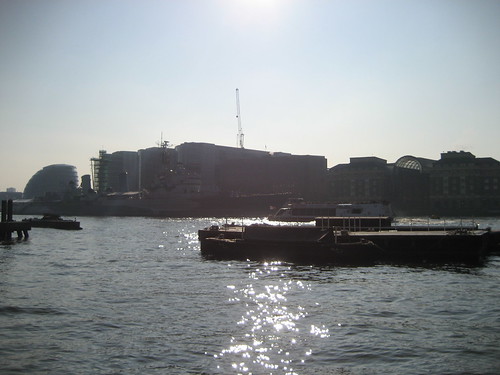 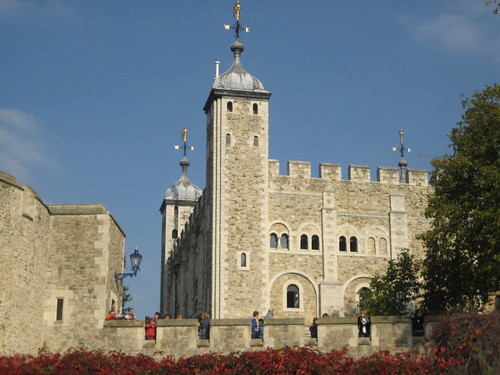 The Tower of London is quite impressive, but it also has one of the highest entry fees of any of the major tourist sights in the city. So, although those lovely Crown Jewels are within, I refrained from getting a ticket inside, and I just enjoyed the view from the exterior. The queue to get in is also huge. 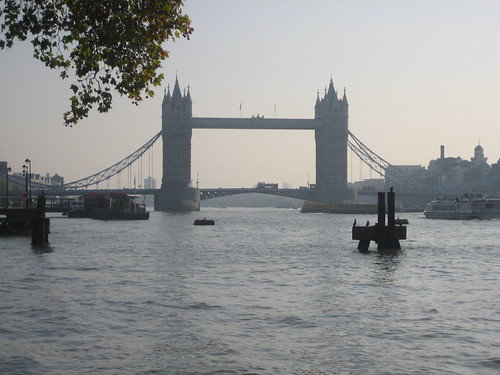 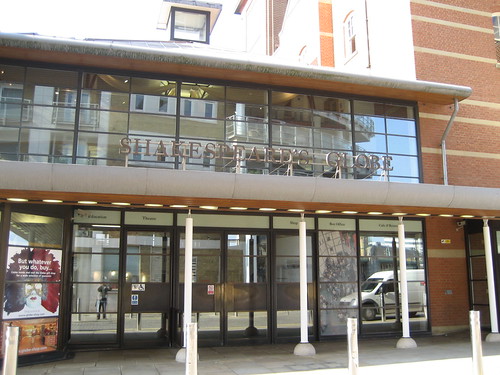 I probably wouldn't have gone to the Globe, except that Vicky is an aspiring actor, and that she studied Shakespeare at university and is a big fan of his. Sadly, the outside of the theatre is all modern and re-done, and doesn't really look all that special. But apparently the inside is the true-blue, authentic Elizabethan original. 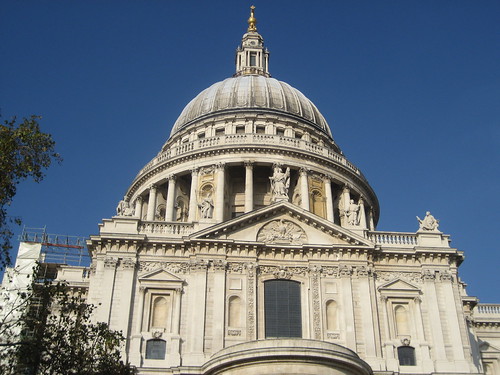 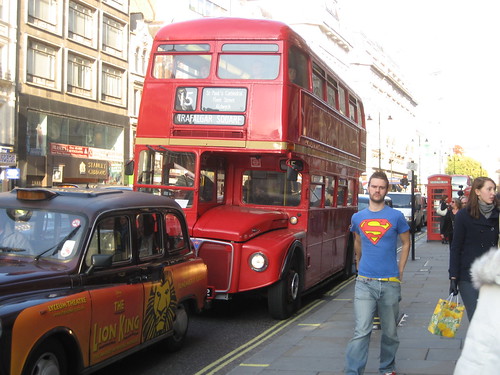 Fleet Street and The Strand (just after Free Parking, $220 each, as the Monopoly board goes :P). 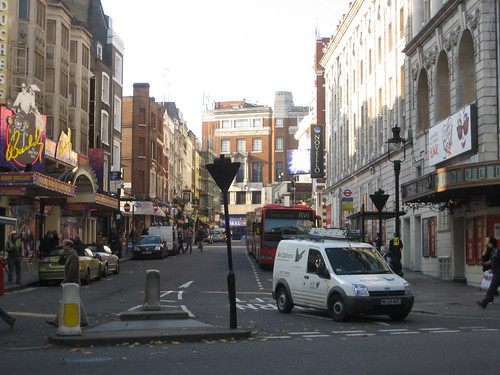 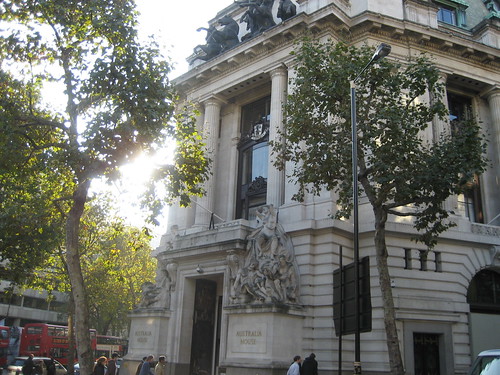 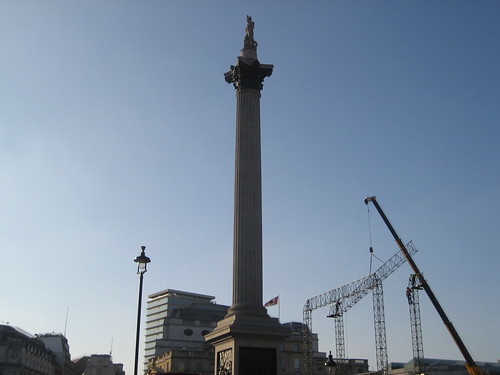 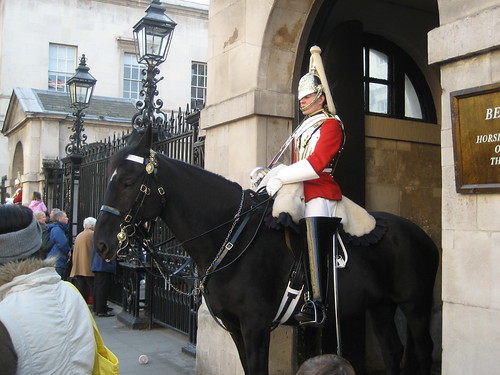 With the horse guards on Whitehall, we were lucky enough to walk by just as they were performing a little changing of the guard. It was quite a complicated affair: fluffy-hatted men on horseback trotting out the gate in a strict route; other soldiers on foot marching and making arcane hand gestures and sword flourishes; and various barked orders and whistles to stand to attention or to get into formation. The whole thing looked so silly: I mean really, has there been any point at all in doing this for the past hundred years? But hey, this is England: and by G-d, nobody loves tradition more than the English. This is a land where "because that's how it's always been done" is the most acceptable and adored reason in the world for doing something. Strange people. 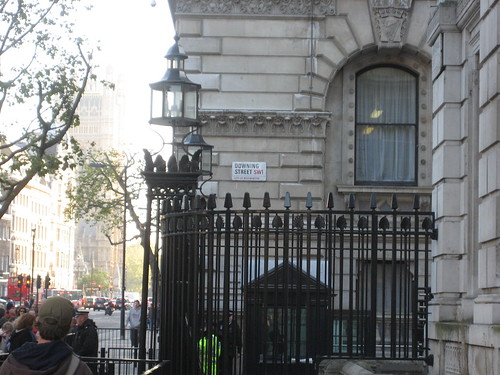 I'm sorry to report that Downing St (the residence of the British Prime Minister — currently Gordon Brown) was rather a disappointment. Not only can you not go into No. 10: you can't even enter the street... at all! There's a big metal gate guarding the entrance to the street, and numerous burly Scotland Yard coppers keeping watch around it. Surely if you can go inside the White House in Washington DC, you can at least walk past No. 10 Downing St in London?! Anyway, apparently they've only had these measures in place for the past few years — no doubt due to the usual terrorism concerns. I saw a car enter the gate: once it was inside, the police searched the car inside-out (including crawling underneath it), and made all the occupants get out and be body-searched. They take the PM's security very seriously here. 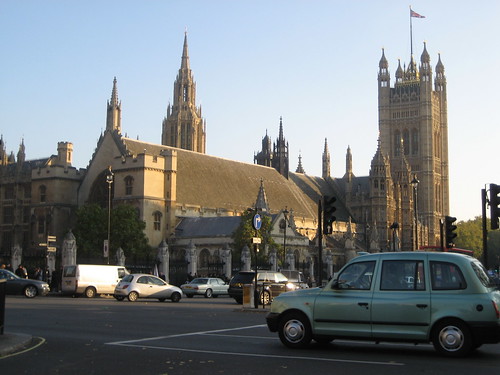 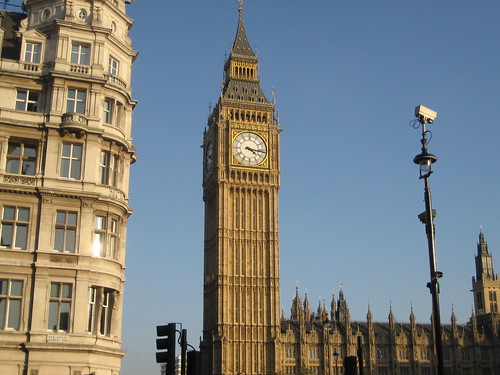 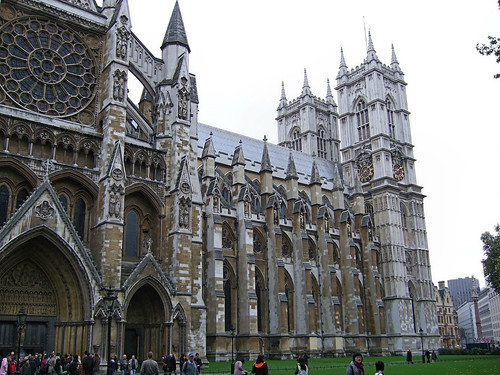 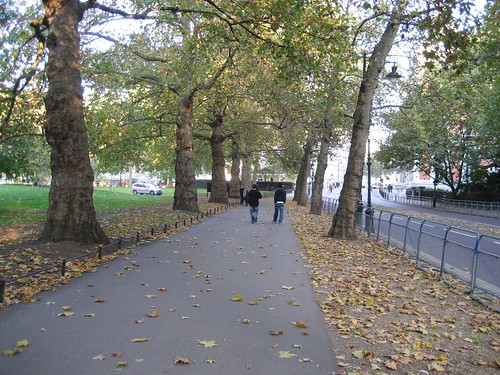 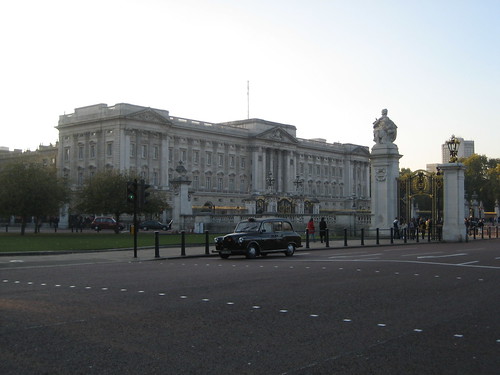 After seeing the sights of Westminster, and walking through St. James Park, Buckingham Palace was the perfect place to finish the tour. We walked through the southern gate onto the plaza, which has "Australia" engraved on it in several places (perhaps it's the "Australia gate"?) — I'm proud and delighted to see that Australia is strongly represented, both in stone and in Aussie people, here in London.

The palace itself isn't as big as I always imagined it being: it's certainly not up there with, for example, Versailles in France. I also hear that Her Majesty only lives there for less than half the year, mainly during the summer — so at the moment, she's not even here; I believe she's in Windsor Palace these days. Anyway, it is quite a nice little pad that Lizzie's got here, and it looks just like on TV.

So now I've been to London, and I've visited the [palace where the] Queen [sometimes lives] :P. Lizzie is, of course, welcome back in Sydney whenever she pleases. As my mate Guido once said: "mate, you tell the old lady that she can stay at my nana's place, but she have to sleep on the couch."