As my mate Dave would say: very saaad news, folks. This was it — today was the last day of the Great Sicilian Ride, all around Sicily and back again. And it wasn't a particularly long or memorable day either: just a quick, flat, straight 50km's or so of easy coastal road, from Giardini Naxos back up to Messina. Most of the way, all that I rode through was an uninspiring sprawl of beach towns and beach resorts — less beautiful than most here in Sicily, although not the worst I've seen or heard of. The landscape on this final morning's ride was dominated by the Monti Peloritani, an extremely rugged range of mountains that's virtually uninhabited, and that leaves naught but a very narrow strip of coastal land for most of the way: the result of this is that between Taormina and Messina, you can see towns, highways, autostrade and railways, all crammed in between the mountains and the sea. I managed the ride in around 3 hours, which meant that by midday today, the loop was complete. 20 days straight on a bike — and now I'm back to square one! 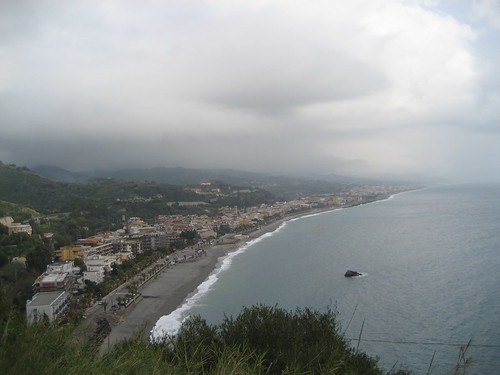 Endless sprawl of resorts between Taormina and Messina. 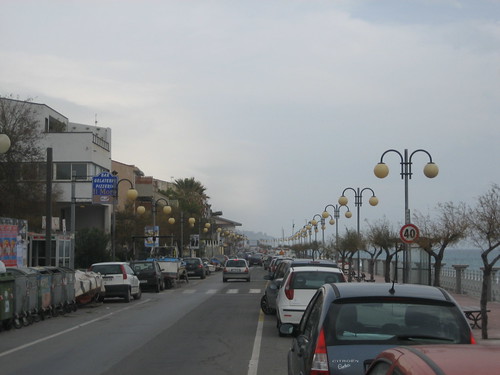 My final stretch of Sicilian riding was hardly a spectacular end: but then again, I didn't want any problems or complications today; I just wanted to get back to Messina, with time to spare. Considering that there was just a single road, and that it went straight up the coast (between the mountains and the sea, like everything else), you'd think that getting lost would be virtually impossible: however, I still managed to do it for a brief period. I accidentally turned off onto one of the (few) roads that leads inland, into the Monti Peloritani; and it was about 5 minutes before I realised: "hey, where's the sea gone?", and turned back around. Apart from that, it really was a straight line to Messina.

The scenery was rather depressing: the sprawl of townships, resorts and holiday-houses was without end; and really, none of them was anything even remotely special or beautiful. I also don't see what the big attraction of this stretch of coastline is for holiday-makers: I'm sure it's lovely and hot in the summer; but the beaches have almost no waves, and the sand is an ugly grey dirt-like affair, strewn with litter even in November. Then again, I guess that Europeans can't afford to be so fussy: they'll take anything with a shoreline and some water, and call it a beach paradise. Thank G-d I'm an Aussie — I, for one, will never have to stoop to such unthinkably low beach standards. 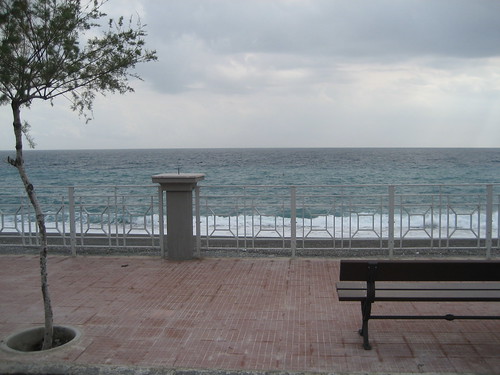 You call that a beach?! Hah!

The ride back into Messina wasn't terribly fun, either. When I left Messina three weeks ago, the northern side of the city wasn't quite so expansive; but today, the southern side that I approached from was a colossal urban sprawl, much of it traffic-ridden and semi-industrial. Seems that Messina's a much bigger city than I realised. It took at least ½ an hour to get through all the mess, and to once again reach the city centre. By midday, I was back at the maritime terminal: the very place where I'd wheeled my bike off the boat all those weeks ago, and begun this great trip. Doesn't look much different now to how it did then. 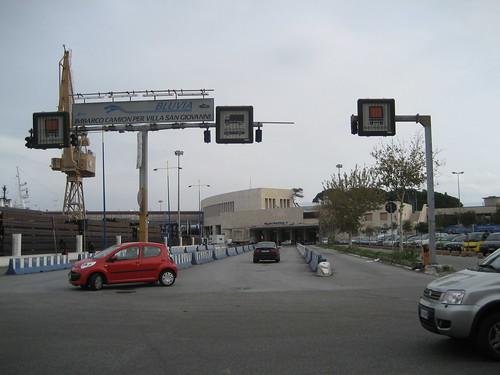 Although I completed the 50km's of today's ride fairly quickly, I wasn't really rushing. On the contrary: I was trying to take my time, because deep down inside, I didn't want the ride to end! But sadly, end it did — and now the trip goes on, just as it has all year.