Did you know that the word "Aussie" has 4 different meanings, here in Germany? First, it refers to Austrians — Germans have been calling their southern brethren "Aussies" for yonks. Second, it refers to Australians — naturally, who the hell doesn't know our affectionate national nickname? Third, it refers to East Germans, whom their Western brethren sometimes like to joke about. And finally, it refers to Ozzie! At least, that's according to Ozzie himself (yep, that's his name): the (allegedly) quarter-native Bavarian, 100% black, 110% crazy tourguide who took half of Wombat's on a tour of Munich this morning. 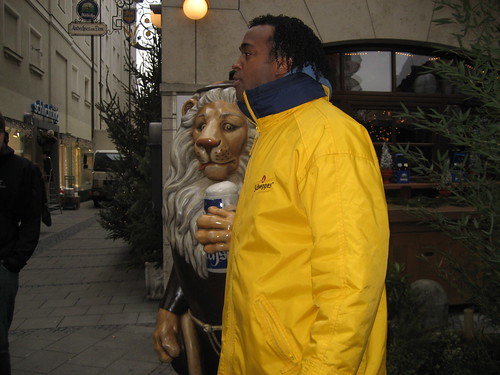 Ever hear the one about the lion, the beer and the Ozzie (left to right)?

This morning — after an unauthorised free buffet brekkie — I went downstairs with about 30 other Wombat's guests, to join in on the hostel's free city tour of Munich. First surprise of the day: when Ozzie (our tourguide) asked all the Aussies to put up their hands, well over half the group broke out in hoots and grunts, and proudly made themselves known! I knew this was quite an Aussie hostel (the name kinda gave it away, for a start — plus the "free welcome beer" was a big hint), but this was simply ridiculous. And not only were Aussies in the overwhelming majority: almost all the rest of the group were Americans; with a mere 1 Canadian and 1 (poor little) Korean making up the "other" category. Not a very mixed bag, eh? To tell the truth, I personally prefer a bit more ethnic diversity in my fellow travellers; and as for being around other Aussies — well, let's just say that I didn't travel halfway around the world in order to hang out with a bunch of bogans. I could have stayed at home if I wanted to do that.

After a brief introduction, Aussie began the tour right there in the lounge of the hostel, where he gave us a 30-minute lightning overview of Munich and Bavarian history. Apparently, Munich has been a very prosperous region for over 1,000 years: it originally gained its wealth from establishing a monopoly on European salt trade, around the 12th century; and it's managed to maintain quite a chunky economy ever since (e.g. with the 1972 Olympics, with its legendary beer production, and of course with Oktoberfest). Bavaria was an independent duchy for over 1,000 years; and was also an independent kingdom for rough half a century, before becoming part of the unified modern German state in 1871. In the 20th century, Munich became the home of Hitler's Nazi movement, and much of the key events that led to the establishment of Germany's Third Reich took place in Munich. Bavaria is also a staunchly Catholic place, and remains quite religious and observant of traditional customs to this day.

The lecture was long, but it packed in an awful lot of key historical information; and I for one found it quite informative. Following the lecture, we began our tour of Munich — in the testicle-chilling -4°C weather — with a stroll down the central pedestrian thoroughfare, towards the Marienplatz central square. Along the way, we saw and visited at least 3 churches: I'm now starting to understand the "ABC" joke ("Another Bloody Church"), that I've heard before about trips to Europe (nice one, Gerbz :P). It was also really, really impressive (and somewhat unbelievable) to hear that all of these churches are complete restorations, and that all of them (apart from one bell tower of the Frauenkirche, which the Allied bombers used as a reference point) were flattened to the ground during the War, and were later restored almost exactly to their original designs. Aforementioned Bavarian wealth helped in achieving this, too :P. 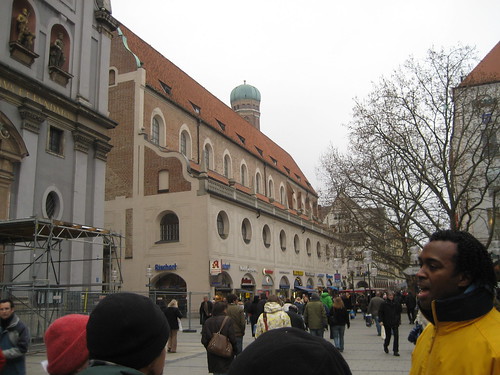 Walking down the main drag of Munich. 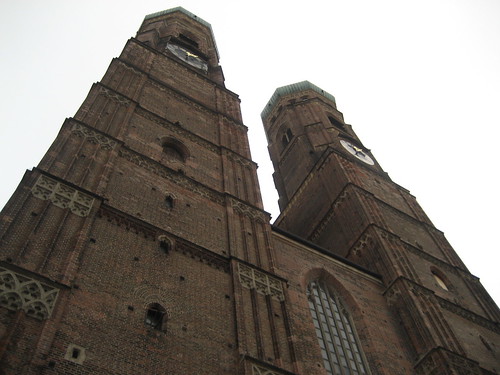 Frauenkirche: one tower original, one restored. Bonus question: which one is taller?

The Marienplatz itself is a charming square, and is the bustling heart of the city. The star attraction of the square is the Rathaus — Munich's historic cathedral — whose bell tower famously pops out little dancing, colourfully-dressed wooden men when it rings, several times each day. There's also a lavish stone statue in the centre of the square, which Ozzie explained is an important symbol of Bavaria in many ways. Plus, for today's visit to the Rathaus, we had the unique opportunity (or misfortune?) of getting to meet the unforgettable Mr. Miller. 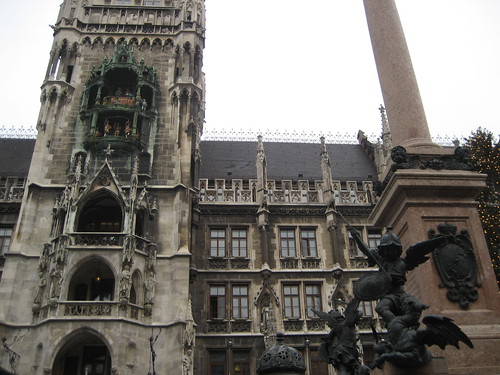 Rathaus and main statue in the Marienplatz.

The Marienplatz basically concluded Part I of the tour: since the next thing we did was enjoy a brief intermission, by visiting the Viktualienmarkt. The Viktualienmarkt is the centre of Munich's "beer gardens", where numerous stalls and restaurant-like affairs offer beer and bratwurst. As such, it was the perfect place for the whole horde of us to enjoy some lunch. Like everyone else, I got myself a full stein of Bavarian beer; and I also decided to try Bavaria's sausage-making specialty, the weißwürste hot dog.

Part II of the tour began with a visit to Munich's most popular venue: its largest beer hall, the Hofbräuhaus (it can accommodate up to 5,000 people at once). "Hofbräu" is Munich's best-selling beer, and it literally means "royal brew". The Hofbräuhaus is also steeped in history: it was the site of the 1st official Nazi party meeting; and as such, it is technically the building where Nazi Germany began. Amusingly, the male toilets in the venue have (apparently) been recently renovated, to include large basins in which you may vomit for free! Vomiting elsewhere in the bathrooms, and making a mess, will incur a cleanup cost of €10. Similarly, the ladies' rooms are now equipped with fresh underwear dispensers. Ozzie took us on a quick stroll through one level of the venue, where we walked single-file in a long train, weaving through the busy tables and trying not to knock over anyones' beers along the way. 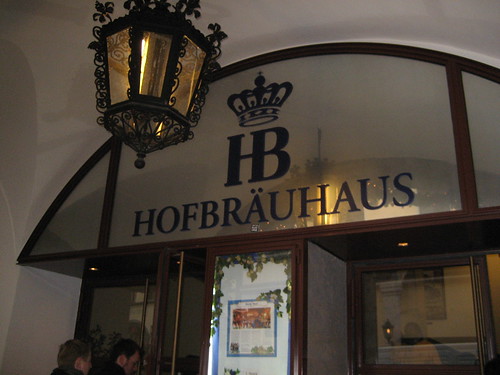 Entrance to the Hofbräuhaus.

Beer drinkers and lunch eaters in one of the venue’s many dining halls.

Final stop for the day was the Odeonsplatz. This ornate and imposing square, innocent as it may seem, was the climax of our "Nazi tour of Munich": and rightly so, since it's possibly the most significant Nazi landmark in the world. It was here that the "Munich Putsch" of 1923 occurred — in that year, the first few members of the (then-small) Nazi movement attempted to take over the city of Munich, by marching to the parliament and storming it. The march was savagely halted by authorities (with 20 casualties in total, from both sides), and it was as a result of this action that Hitler was captured and imprisoned by the Bavarian government. 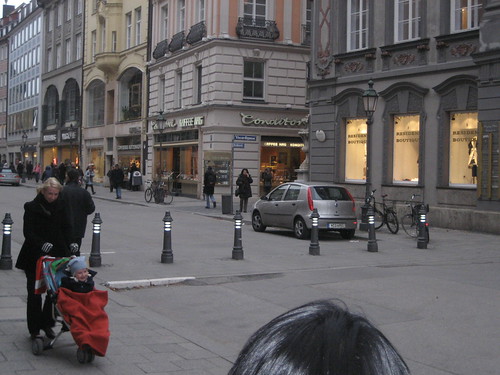 Entrance to the Odeonsplatz: the black barriers mark the spot where the Munich Putsch was violently ended. 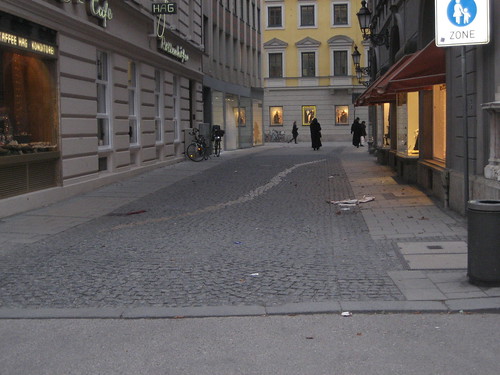 Memorials in the Odeonsplatz are few, and are subtle: for example, this golden line of cobbles in the road, that marks what happened here over 80 years ago.

As a Jew, I must say it felt a little bit spine-chilling to be standing here, at the very place where the Nazi movement was born — the movement that caused more pain and suffering to my people, than has any other movement in history. It was also somewhat scary, as Munich is well-known as being the safe haven of many neo-Nazis to this day. However, as Ozzie so eloquently put it: "I'm black, and I'm American, and I've walked down this street and shouted out 'Nazi Nazi Nazi' every day for 2 years, and nothing's ever happened to me — so I don't think you guys have anything to worry about". 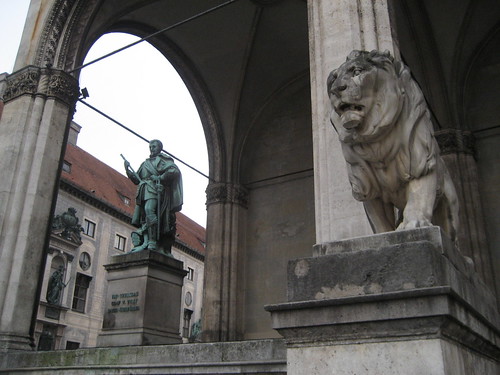 Statues on the platform overlooking the Odeonsplatz, with the rebuilt Residenz (former home of the King of Bavaria) nearby.

One other cool thing that Ozzie showed us, just as he was wrapping up his tour for the day: a fountain that's been completely sealed up with wooden boards. According to Ozzie, the city of Munich has always had two types of fountains: those that it's safe to drink from, and those that it's not safe to drink from. Traditionally, the former have been unmarked, and the latter have been marked with signs warning would-be water-drinkers to stay away. However, with the recent growth of Oktoberfest — and the resulting explosion in annual hordes of blind-drunk foreigners stumbling around on the streets — there has been an ever-increasing incidence of these signs going ignored or unnoticed, and thus of Munich's visitors getting violently ill from drinking dirty water.

That's why, quite recently, the city of Munich decided to get rid of the signs, and instead to simply board up all the fountains from which it's unsafe to drink. Hence, every visible fountain in the city now contains fresh, clean drinkable water. Although personally, I wouldn't take even a sip from the city's fountains during Oktoberfest, during which time they no doubt get pissed in, puked in, and frolicked in by the plastered hordes. 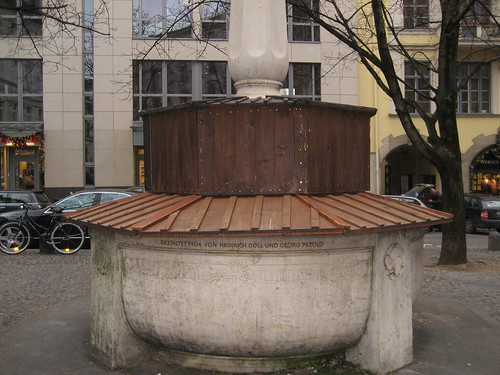 When you do that to a fountain, even the most utterly wasted bogan should get the message, and go look for a drink (or urinal) elsewhere.

In summary: this was one of the best city tours I've ever been on, and Ozzie was one of the most colourful (no pun intended) tourguides I've ever had the fortune of being led by. The weather was far from pleasant: but the Ozzie tour of Munich was fun, informative, and very satisfying.