I'd heard that you have to watch out for counterfeit money here in Peru, but I hadn't encountered any until today. I caught a taxi to the Plaza de Armas this evening; and when I handed over the two un nuevo sol coins to the cabbie as payment, he inspected them both, and handed one of them back to me. "Es un falso" (lit: "it's a fake"), he explained to me. I couldn't perceive any difference in the falso, until it was explicitly pointed out to me; but apparently, every man, woman, and child in Cusco can tell a falso a mile off. Can you? 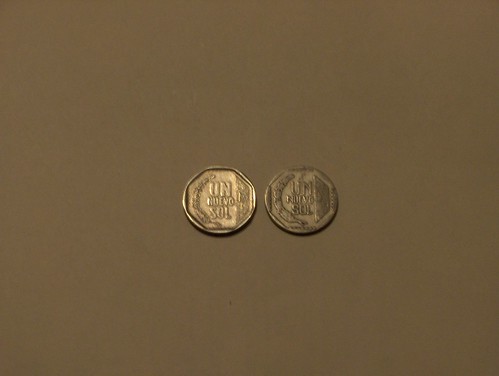 According to what I was told, it's generally fairly obvious when Peruvian money is fake. In the case of coins, you need to look out for:

Anyway, after offering the falso to about 10 different people, and having it rejected, I managed to flog it off the next day, at a cabina. Lucky I managed to get rid of it, and lucky it was only s/1 (app. USD$0.30).

PS: the falso is the one a la izquierda (use Babelfish to help you find the answer, if you really need to know, and if you don't know any Spanish).