Mr. Miller is an 84-year-old, Polish-born Munich local, who shamelessly (but not regrettably) interrupted our tour of Munich today in the Marienplatz. He staggered up to Ozzie, totally wasted on Glühwein (waving his Glühwein mug around); and wouldn't leave us alone until he'd told us his life story (at times, in surprisingly passable English), and sung us a few songs in G-d knows what language. You gotta see it to believe it: so check out the video below.

This guy was a serious character. We could hardly believe how old he was: so in order to clear any doubts, he promptly pulled his passport out of his pocket, and proudly pointed to the "date of birth" printed on it (it read "1923"). He was obviously quite smart and well-educated — after all, how many 84-year-old Bavarians can speak English while drunk? — and he probably would have been fascinating company, were he not completely plastered. Sadly, though, he was just that: he interrupted us for a good 15 minutes; and every time we thought we'd be able to shake him off, he grabbed a hold of Ozzie again (mainly for physical support), and started singing and ranting. He caused us a great deal of delay: but it was definitely worth it for the entertainment value. Several members of the group later reported spotting him during our walk through the Hofbräuhaus, having finished with the Glühwein, and moving on to steins of Hofbräu for his main course. 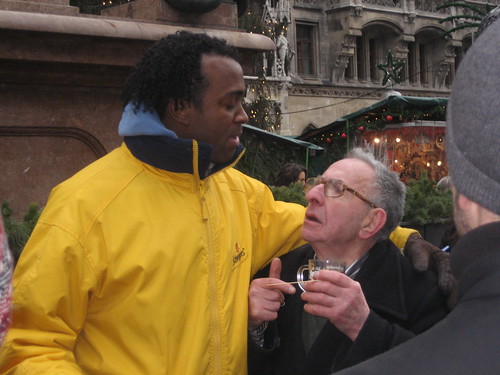 Ozzie and Mr. Miller in the Marienplatz. This tour is never to be repeated!