This morning was a pleasant, relaxed start to an extremely challenging and unpleasant day. From last night's garden campsite, I managed to pack up and sneak out unnoticed (quite lucky — as it literally was someone's back yard, I doubt that they would have been impressed with my squatting there), and to continue south along the SS514 highway. The collection of farms and houses that I camped in shared a common driveway, which sported a large gate at its entrance: fortunately, this gate was open both when I arrived yesterday afternoon, and when I departed this morning. It was a quick and sunny morning's ride to the city of Ragusa: the weather looked promising; the roads were easy and the signs not-too-confusing; and traffic was fairly light. Before I knew it, I was enjoying the sights and sounds of Ragusa. Just a pity that I didn't stay in the city longer: had I done so, I could have saved myself a great deal of hardship.

Although the historic centre of Ragusa (which ironically is now at the eastern edge of town) is quite small, the modern city is an extensive urban sprawl, that continues to creep ever further west as the place grows. Since I was approaching from the west, I had to get through this sprawl: it took a while to ride through "suburban Ragusa", and to navigate the roads leading into the centre. Once in, however, I was rewarded with everything that the guidebooks promise: a gorgeous baroque streetscape, brimming with amazing feats of architecture, and bursting with Italian style. 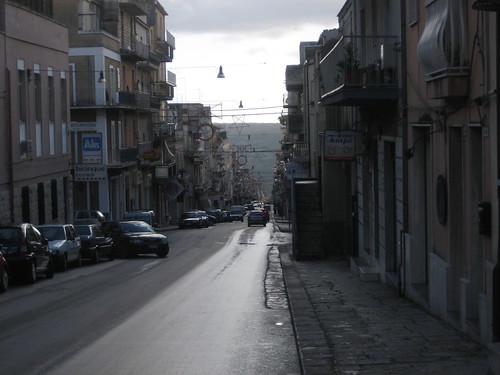 Main road into the historic “centre” of Ragusa (now on the city’s eastern edge).

Ragusa is one of many towns in south-eastern Sicily that was completely rebuilt in the 1600s, due to a massive earthquake that devastated the area at that time. As such, it is also one of several towns in the region that was able to be completely planned: and planned it was — by some of the leading Italian architects of the period. As I rode into the historic centre, the first area that I encountered was "Ragusa Superiore" ("high Ragusa"), the part of the old town that straddles a large plateau, and that overlooks "Ragusa Ibla" ("low Ragusa") — which is on a small hill lower down. The two parts of the old town are separated by a little valley, and are connected by a winding road. 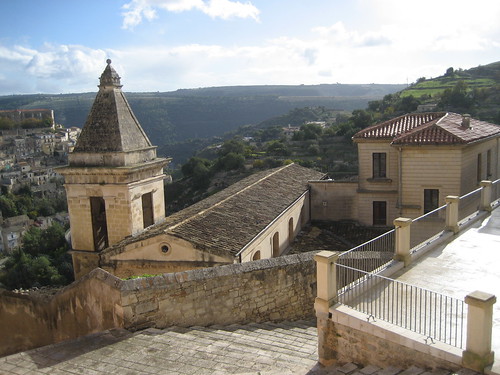 Steps and view from Ragusa Superiore.

I reached the edge of Ragusa Superiore at about 9:30am — and when I got there, I was greeted with a lovely view of the valley below, and of Ragusa Ibla and its little hill on the other side. As well as the winding road, there are also several hundred steps that snake down the hillside, and that lead you through Superiore's immense collection of Baroque buildings. Seeing as I was on my bike and all, I elected to cruise down the road. 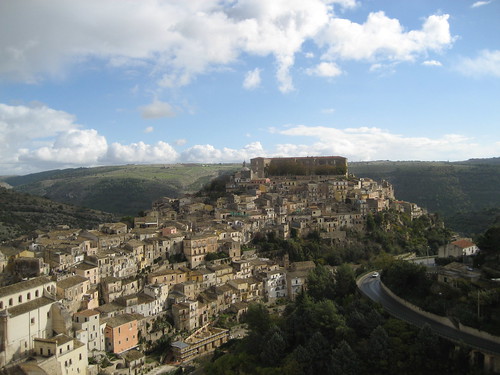 It was when I began my descent towards Ragusa Ibla that today's weather started turning funny. It had been sunny all morning — but out of nowhere, a bunch of clouds seemed to have rocked up; and to my utter surprise, before I knew it I was getting drizzled on. Anyway, it was only a bit of light rain. When I reached the bottom of the hill, I stopped at a cafe, and snacked on an apple while I waited out the rain. It only took about 10 minutes for the storm to clear, after which it was relatively sunny once more.

So I continued on passing by through Ragusa. I didn't actually ride into Ragusa Ibla: it's a dead-end detour up a steep hill; and you can see most of it from Superiore and from the valley floor. However, I saw about 10,000 signs for B&:Bs and hotels, all pointing straight into the centre of Ibla — so I can take a pretty good guess as to what I'd see if I had gone in (i.e. lots of B&Bs and hotels). Plus, I got plenty of good views of the hill, its Baroque buildings, and the impressive structure that's plonked on the top, from the road that continues through the valley, and that snakes all the way around Ibla before continuing on out of Ragusa. 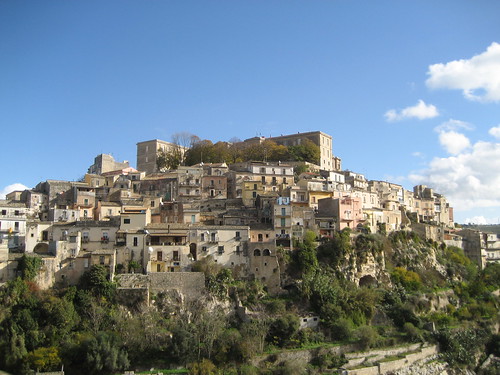 If only I'd known what was coming next, perhaps I would have stayed a little longer in Ragusa. But I didn't know; and besides, it was only 10am in the morning — hardly a time to stop and put your feet up!

‹ A garden near Ragusa Hell, hail and miracles to Modica ›
Filed in: Ragusa • Quaint • Chilled • Baroque