It was a strange start to the day this morning — one bizarre obstacle after another. I woke up bright 'n' early at Agricasale — after a night of fairly heavy rain (luckily I stayed quite dry inside my tent) — to find the place quiet and deserted, and the main building (with the dining hall, reception and kitchen) locked shut. This wouldn't have been a problem: except that I left my camping dishes inside the kitchen last night (on the drying rack), and that I couldn't leave without them. It took me a few minutes to find someone who worked there — two guys rocked up in a ute at about 7:15am — and it took me another hour to convince them to wake up the head of the site (Conrad, I assume), and to acquire the key and let me in. Then — after I finally got out of the place — I realised that apart from being at the bottom of a valley, I had no idea where I was (thanks to last night's "Follow me!" ride in the dark), and no idea how to get back onto the main road. Oh, what joy :P.

Agricasale was good fun last night — I enjoyed the dinner with Conrad, and the free camping, and the nice fireside company and all — but this morning it was just plain weird. When I woke up, the only person around was Nicolas, who barely said a word to me (he was doing some kind of gardening, pushing a wheelbarrow around), and I think he really does have some mental disability (as Conrad suggested). I don't know who the two guys in the ute were: they seemed like grounds helpers of some kind; but they didn't have the keys to the main building, and they acted quite strange. And as for Conrad himself: he was nowhere to be seen! I assume that it was him that the ute guy woke up and got the key from — but I'm not sure, because he didn't come out of his little cottage.

The morning light also gave me the opportunity to see the site of Agricasale properly. It's quite a nice place — next to the main building, it has a large and luxurious swimming pool, and I think there are tennis courts and other facilities nearby — and the extensive gardens and camping areas are lovely. It must be great here in the summer, when all the facilities are open for use, and when there are hordes of other campers to keep you company. But at the moment, it's just a bit strange. I was glad to get out of there, and to continue my never-ending Sicilian bike journey. 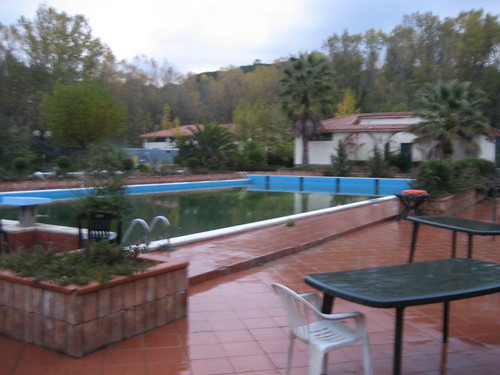 Since I wasn't much enamoured with the idea of trekking all the way up the big hill that I'd descended yesterday evening — or of returning unnecessarily back to Piazza Armerina — I decided to keep following the road past the campsite, and to continue wherever it led. I was very lucky: 2 minutes after I'd begun the ride, a car drove past, and I signalled for them to stop. I asked them (in terrible Italian) if this was the right way to reach the main road. The people in the car were an elderly local couple, and — although I had great difficulty understanding them — they were very nice. They said that going this way would eventually take me back to the main road — and would take me in the right direction as well — but that I had to get through a series of poorly-sealed rural laneways to get there. They told me to follow them: they drove very slowly, and for about 10 minutes I kept their tail.

Soon after, an old farmer in a crappy little pickup truck drove past, and we signalled for him to stop as well. After some talking, the couple in the car said that I should follow the farmer now instead — as he was going the way that I needed to go — but that at the first turnoff, he would turn right, and I needed to turn left. So the couple drove off towards their home, and I said goodbye to them, and followed the rustbucket Sicilian pickup truck instead.

The road was indeed very primitive: barely sealed, it was little more than a 4WD track providing access to a few of the farms in this valley. It was hardly marked on my map, and that doesn't surprise me at all. However, it was flat enough most of the way, and it was just smooth enough for me and my heavily-loaded piece-of-junk bike to travel along. After a few minutes, the farmer turned off to the right; and I followed the instructions of the elderly couple, and went left instead. From here, they assured me, it was a straight line to the main road.

I must admit, I felt pretty hopeless: riding through the barely-marked back roads of rural Sicily, with no proper idea as to where I was, and following random old couples and farmers in pickup trucks. Anyway — as long as I made it out of there, and reached civilisation again, all would be fine.

And the old couple didn't let me down. Sure enough, within ½ an hour I was back on the main road, and headed towards the town of Mirabella. This would take me south, which is the way that I'm trying to go today, and which will hopefully get me towards my destination of south-east Sicily.