Today began our three-day trip to Parque Nacional del Manú, and to the jungle town of Pilcopata therein. The trip has been organised by Ashley, who has someone in her family that works for the tour company that we're with, Selva Inka. The people on the trip are: myself; Ashley; Wil; Stephan; and Chris. Our first day consisted, more than anything else, of a very long, very trying bus ride from Cusco to Pilcopata.

We met at Ashley's host family house at 7:45am this morning; and after waiting for everyone to arrive, and being joined by our tourguides, we were on board the bus to Pilcopata and on our way by 8:30am.

We drove north-east from Cusco for most of the morning, until we reached the town of Paucartambo. We stopped at this charming little town for a while, to admire its nice mountainous surroundings and its architecture, and to rest and to get started on our pack lunches. Not that much to see here, but it has a certain appeal in its character and its friendliness. 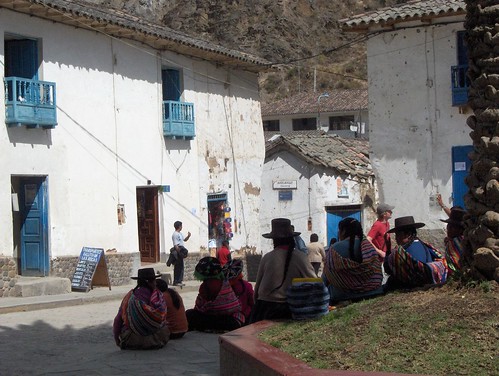 Local women in the main square of Paucartambo.

From Paucartambo, it was about 5 more hours to Pilcopata; and boy, they were 5 hours that were longer and more nauseating than most, that's for sure. The road rapidly went down out of the Andean highlands, and started descending into the jungle basin that is Eastern Peru. Once it started doing this, the road immediately became steep, windy, bumpy, and treacherously close to the constant cliffs in the area. The bus had to take it very slow on the hairpin bends of the narrow road; but that didn't help very much to curb our apprehension about making it to the bottom of the valley in one piece.

The bus got there in the end.

Despite the difficulties and the odds, we made it down into the jungle basin alive, and we entered the official boundary of Parque Nacional del Manú, from where it wasn't too much further through the thick rainforests, to the town of Pilcopata. Once there, we dumped our bags in the guesthouse that we're staying at, we explored the town a bit, and we had a relaxed evening of dinner and drinks. 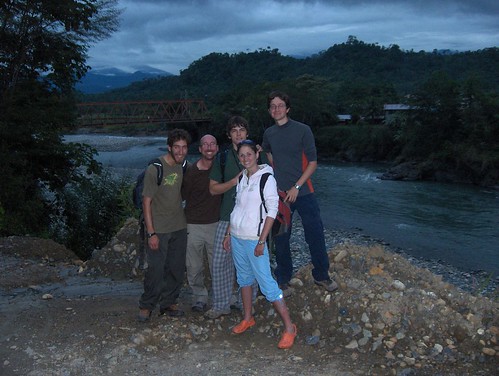 The jungle crew arrives. From left: myself, Chris, Wil, Ashley, and Stephan.

We were advised that it would be very hot in Pilcopata, and that we would need only very light clothing for the trip. However, when we got there, we discovered that this was not so: the weather was quite cool (although not freezing cold, like Cusco), and very cloudy (and a bit rainy). Apparently, this is quite unusual for the area; but it looks like the weather will be staying like this for the duration of our time here.