This dude's real name is "Let", and he's my main instructor for the three-day climbing course that I'm doing here at Ton Sai. When I told Let that my name was "Jeremy", he had a lot of difficulty pronouncing it — the closest he could get was "Jet Li", and so that is now my official rock-climbing pseudonym. Let's a really nice guy: he's only been rock-climbing himself (let alone instructing!) for the past six months; before that, he spent ten years as a chef in a glamorous hotel restaurant in Phuket. His ability and his fitness levels are remarkable, considering how new he is to the sport; and after only six months of working with farangs, his English ain't so bad either. 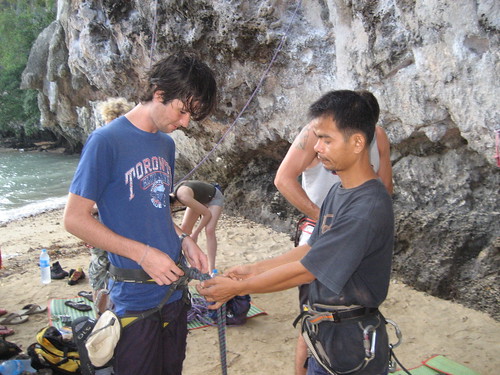 Let (right) helps the Canadian dude into his gear.