For the first time since I arrived here in BA — over a week ago — today it stopped raining, and the sun came out! Yay — good weather at last (it's been wet and freezing all week, until now). So with the sun finally shining, I decided it was time to immediately seize the day, by seizing one of the free bikes that they have at The Clan, and to take myself on a bike tour around the city. As Master Yoda would say: "good this weather finally is, so ride a bicycle you must".

The bikes that they have at The Clan (only two of them) are absolute pieces of crap: they're about the most rudimentary things I've ever seen. No gears, no handbrakes (only pedal-backwards brakes — haven't used those since about the age of 5), and not much else, really: but they have seats, handlebars, and pedals, and that's enough to get you on the road. And everyone else in this city seems to ride equally crap bikes, anyway: and you wouldn't be experiencing the place properly, if you didn't ride the same rustbuckets as all the locals!

I set off at about midday — managing to get the bike down the stairs and through the security doors at The Clan with some difficulty — and then I was off. Took a little while to get used to the extreme dodginess of the bike, and to get up to speed with the traffic system in BA (or lack thereof): but once I'd survived the first 5 minutes, the rest was child's play. 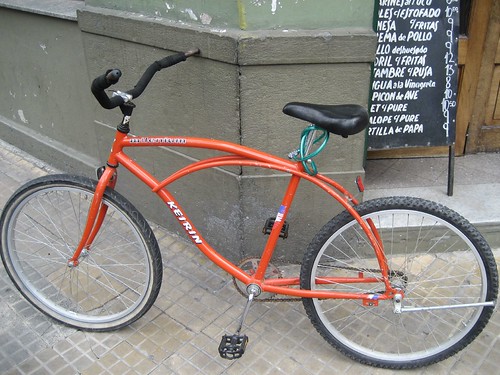 First stop on today's bike tour was San Telmo: the funky artists' neighbourhood that I visited on Sunday, when it had its lively market going. Sadly, there was no market today: but all the trendy cafés and bars were still open, and there were still a few stalls set up in the main square. Riding in San Telmo can be a bit tricky, due to the bumpy old cobbled streets, and the fairly high amount of both vehicle and pedestrian traffic. But it's also a good, fun challenge. 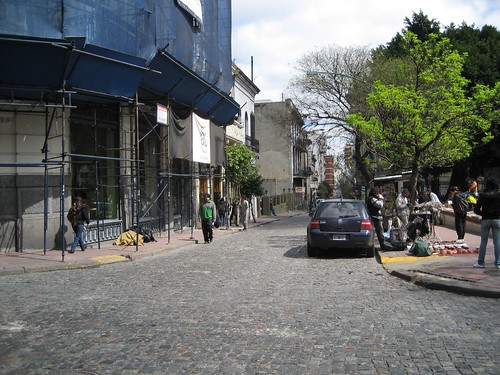 Cobbled street in the centre of San Telmo.

From San Telmo I continued south, away from the downtown city centre, and towards the famous riverside area of La Boca (lit: "The Mouth" — referring to the mouth of the river, the Río de la Plata). Considering that I had no map, no compass, and no clear idea of where I had to go (I just kinda "tried to head south"), I think I did a pretty good job of finding my way there. La Boca is a poor, working-class area, with ramshackle houses (and even makeshift shelters) peppered amongst a sprawl of factories, warehouses, and docks. The area is dilapidated and a bit shifty; but nevertheless, it has a lot of character, and the people there seem to be reasonably friendly and non-hostile (during the day, anyway). La Boca also made for the best riding that I did today, as its many back streets are low on traffic (unlike most of BA), as well as flat and fairly well-maintained. 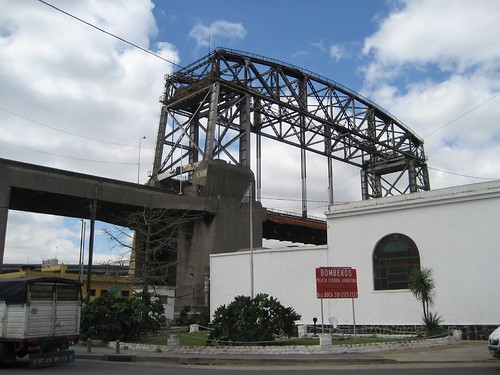 There is one little spot in the centre of La Boca, that's a starkly contrasting exception to the rest of the suburb. The street called "El Caminito" — and a few streets right next to it — is the well-known tourist haunt of the place, and the only part of La Boca that most tourists ever see. It's jam-packed with restaurants, cafés, souvenir shops, and street vendors selling artwork. A little bit like San Telmo — except that it's permeated by the working-class atmosphere of the neighbourhood surrounding it; and that it's next to the river, and has a nice view of, and a boardwalk by, the (hopelessly polluted) water. 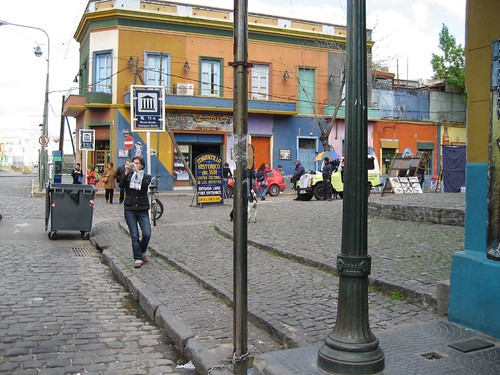 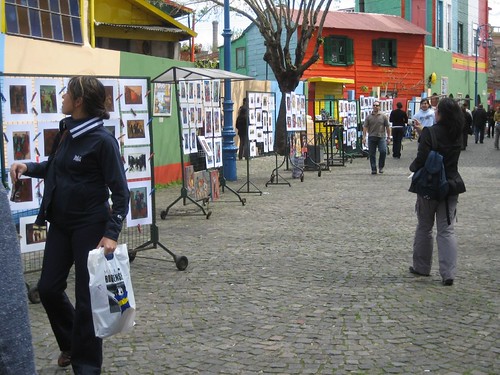 Paintings for sale in La Boca. 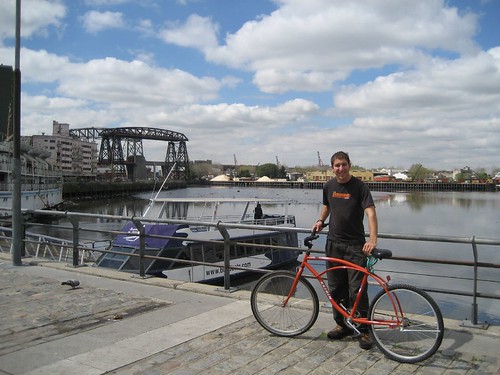 Next to the water in La Boca.

From La Boca, I once again started cycling through the city, with an idea of where I wanted to go, but with nothing except a vague knowledge of my destination's whereabouts to get me there. Anyway, I guess I studied my LP map pretty well, and I guess that my sense of direction isn't too bad after all: because I seemed to get where I wanted to go without any problems (not that I was in a hurry, of course).

I headed west from La Boca, continuing through the poorer neighbourhoods near the riverside, before cutting north and heading back towards the city centre. I went through Barrio Once — where I did my kosher tour of BA — and from there, headed further north, through Barrio Norte and eventually Palermo: all the rich, upper-class, and heavily-trafficked parts of town. I stopped for lunch near a big park (I think it was sort of in Palermo), where I sat on the grass, and munched on some take-away gourmet empanadas while I basked in the ambiance. Nice area: lots of students lounging on the lawns; and lots of trendy-looking people walking their manicured pedigree dogs through the park. 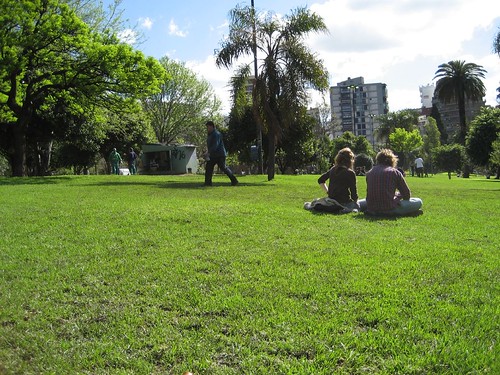 Nice day to hang out in the park.

After that, all that I had left to cycle through and to see were the grand sights — such as the main plaza, and the fine arts museum — that take up much of the area north of the downtown city centre. And from there, it was straight down the gigantic Av. 9 de Julio, and back to the hostel. 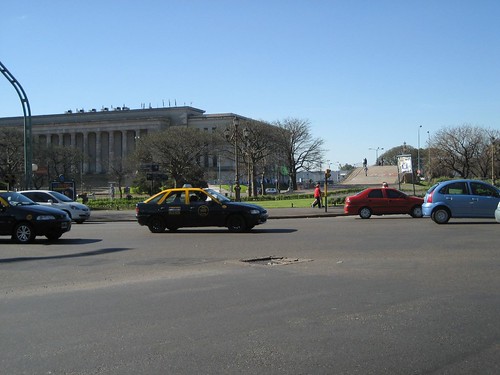 Fine arts museum (the walking bridge next to it is good fun to ride over). 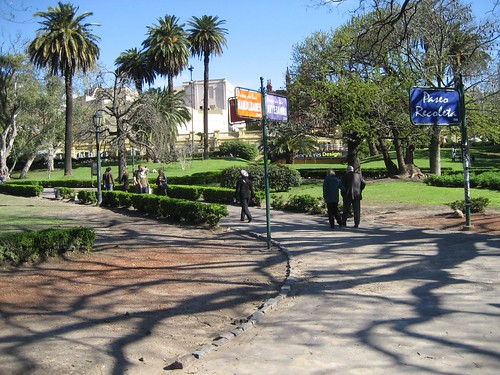 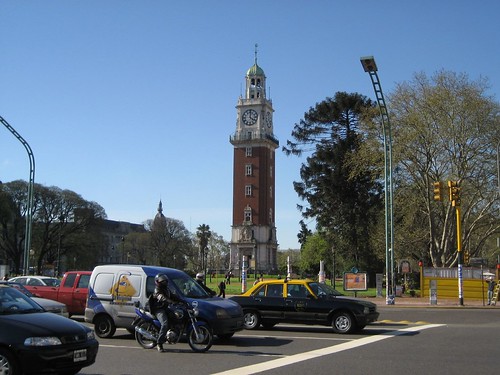 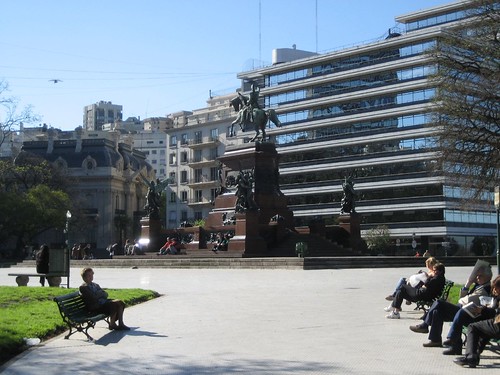 Big dude on a horse in the main square of Buenos Aires. 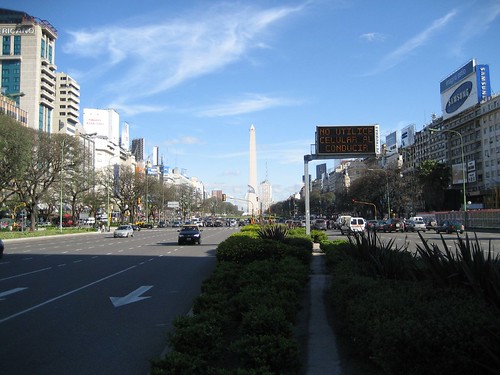 Av. 9 de Julio, claimed to be the biggest road in the world, with as many as 10 lanes of traffic on each side (in some spots). Takes about 10 minutes and 4 sets of traffic lights to cross this road. 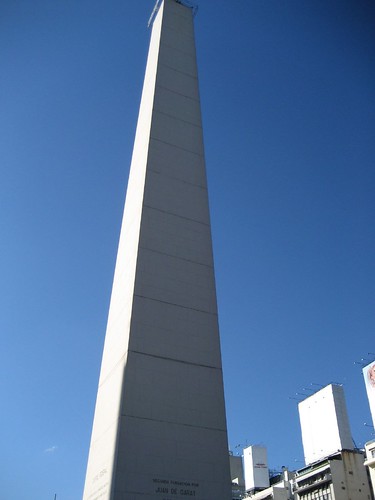 El Obelisco, the big obelisk in the middle of Av. 9 de Julio.

All up, a very enjoyable day's riding. The traffic was less-than-ideal for most of my route: but La Boca provided a nice relief from this for a bit; and it was so good to get out and to enjoy some nice weather again, that it didn't bother me too much anyway. Buenos Aires is a beautiful city, and one of the best ways to experience and to appreciate its grand beauty is on a bicycle.