This weekend, I decided to try real mountain climbing for the first time in my life, and I did it on the mountain of Huayna Potosí, not far from La Paz. Huayna Potosí is recommended as a great first try for people with no prior climbing experience, as it's a relatively easy 6000m peak to ascend (the total ascent is to 6088m), and as it's conveniently close to the already-high city of La Paz. Today, I drove out to the base camp with my guide, and completed the hike of about 3 hours, to the high camp of 5200m. 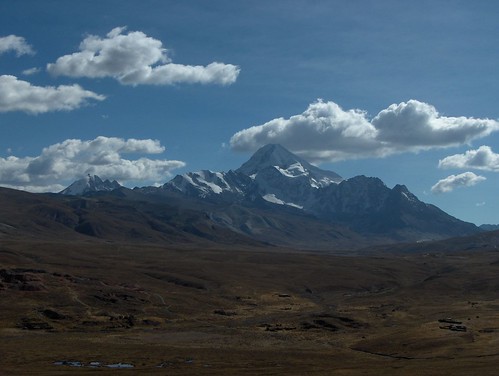 View of Huayna Potosí from the road to the base camp.

The day started by rocking up at the office of my tour company at 8:30am, and getting geared up with everything I needed for the trip. Huayna Potosí is real, serious mountain-climbing; and as such, you need serious gear for it. The company had me borrow from them: a set of waterproof / windproof jacket and pants; a balaclava; climbing boots; a sleeping mat; a tent; crampons (spikes that you attach to the underside of your boots, for walking on the ice); and an ice axe. After a taxi ride, I was at base camp by about 11:30am, with my guide Issac, and with all the equipment I needed. 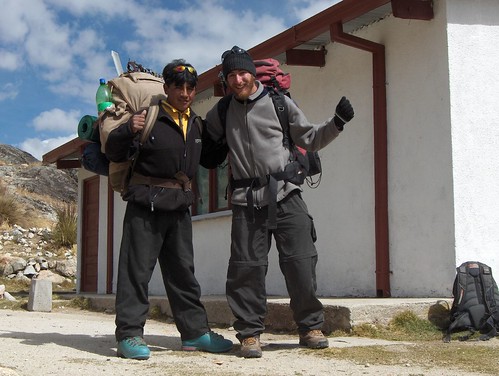 Issac and myself, ready to go.

For this particular adventure, Chris decided to stay in La Paz; he considered this a bit too much hard work for a Bolivian weekend. However, there was also a French guy called Guillaum in my group (he had another guide, called "Super Mario" — we got one each), who I met when we got to the base camp.

All that we had to do today, for the first day of the expedition, was to hike along the path from base camp to the high camp. This took about three hours, of mainly uphill, and it wasn't too bad at all. Breathing and cold became a bit more of an issue as we got closer to our destination; but we were all in tip-top condition when we reached high camp. 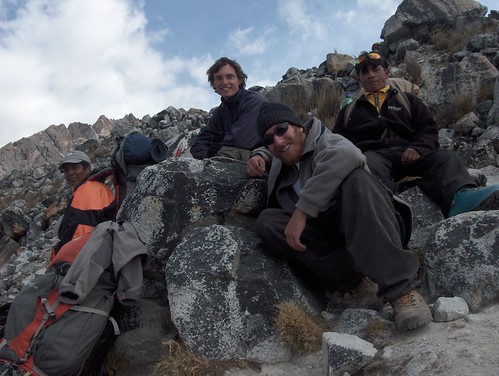 Super Mario, Guillaum, myself, and Issac (left to right), on our way up to high camp.

Once we reached high camp, we set up our tents in the rocky area just below the snowline, and we prepared dinner. We were lucky with the tents: we just got them set up in time, and got our bags inside, before a light storm of snow came raining down on us. 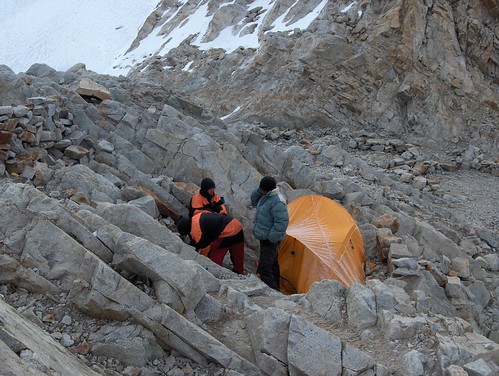 Tents set up, and getting dinner ready in the snow.

We had dinner very early — at about 5pm — in time to get in bed by about 6pm, so that we could be up really, really early tomorrow. Very basic dinner, of instant noodles, bread, and plenty of maté de coca (helps with the altitude). Quite an experience, eating that early, and eating it all in freezing cold weather, sitting on a pile of rocks. 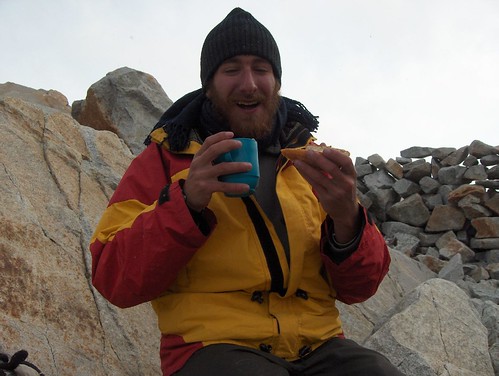 Rugged up, and enjoying my cuppa of maté de coca.

Today, of course, was only the start: tomorrow comes the actual ascent.