Frankfurt to Madrid with Ryanair

This morning was my first-ever experience with Ryanair, Europe's favourite and most dodgy discount airline. I thought the easyJet flight was basic; but it was nothing compared to this. Flying with Ryanair is a joke, end of story. They're cheap, they're no-frills, and they get you there. It's best not to think about the rest.

Prior to yesterday, I assumed that my flight from Frankfurt to Madrid was leaving from Frankfurt International Airport. I assumed wrong. Upon closer inspection, I discovered that Ryanair flights depart only from Hahn Frankfurt: this airport is almost 2 hours from central Frankfurt by bus, and it's much closer to various other cities (e.g. Mainz) than to Frankfurt; calling it "one of Frankfurt's airports" is bordering on oxymoron. Thus, I had to get up at 6am this morning, and pay the ridiculous €12 to ride the bus to Hahn — almost as much as the whole flight cost!

Hahn is a super-crap airport: it's quite literally in the middle of nowhere, with no train connection nearby, and with the Ryanair-affiliated bus service from Frankfurt being the only way to get there (short of driving). The airport itself is quite small, and has nothing apart from a few little cafes. And it was when I entered the airport and reached the check-in counter, that I became rudely introduced to two of Ryanair's stingiest and most unaccommodating rules.

Rule one: the weight allowance for checked baggage is a mere 15kg; for all half-decent airlines (including easyJet), it's at least 20kg. My bag currently weighs about 18.5kg. What was I to do? I couldn't check-in my oversized bag, as they'd charge me through the roof for it. Nor could I just throw away 3.5kg of my bag's contents. The only thing I could do — in a mad frenzy — was to pull out a good 5kg-worth of my bag's contents, including my tent, sleeping bag, books, and various items of clothing; and to stuff these things into 2 large plastic bags, for bringing with me as hand luggage.

Rule two: check-in closes strictly 40 minutes prior to a flight's scheduled departure time. If you arrive at the counter 39 minutes prior, then that's too bad: no boarding pass for you, say goodbye to your flight. When I arrived at the counter, I had about 45 minutes until the scheduled departure time of 9:25am. However, upon discovering the 15kg rule, it took me at least 5 minutes to empty my bag of half its contents. Then, when I turned back around to the counter, it was closed! "OK", I said to the girl working there, "I'm ready to check-in now."

"Check-in is closed", the girl replied.

"Errr... what do you mean?" I said. "How can it be closed? I was just about to check in — didn't you see me, I've been standing in front of you for the past 5 minutes, emptying my bag."

"Check-in closes 40 minutes before departure", she told me briskly.

Anyway, it seems that I had beginner's luck on my side today: the girl behind the counter decided to take pity on me, and to re-open the counter so that I could check in. At the time, I took this act of kindness for granted: but I've now heard that if you arrive literally 1 minute late for check-in, then 95% of the time they'll refuse to hand over your boarding pass, and they'll force you to buy a ticket for a later flight. Phew, glad that didn't happen to me — but I tell you, it was bloody close!

After the ordeal of checking-in (on-time and within weight limits), and then going through security, Ryanair continued to keep my aggravation levels nice and high. The flight was delayed by about 1½ hours — so I was sitting in the jam-packed departure lounge, twiddling my thumbs, until we finally boarded and took off at around 11am. Not to worry: at least I had someone to talk to while I waited.

The Ryanair dodginess continued. Like easyJet, boarding a Ryanair flight is a mad rush: there's a semblance of a queue (at best) to board; there's no walkway onto the plane (even though the plane is a Boeing jet), we had to cross the tarmac on foot in the drizzling rain; and there's no assigned seating, you just grab the first seat and the biggest overhead baggage space you can find. No drinks or snacks are provided on the flight, and there's no in-flight entertainment — at least, not unless the various in-flight "advertisements" and sales pitches count as entertainment. And perhaps most disturbing of all, is the way they fly the plane itself: taxiing (at both ends), takeoff and landing are all noticeably rushed compared with that of other airlines; as is the safety presentation, which finishes literally 5 seconds before the engines roar into full-throttle. You can smell the fact that they're keeping within the absolute minimum of their legal aviation safety requirements, and that they aren't doing a scerrick more than that. 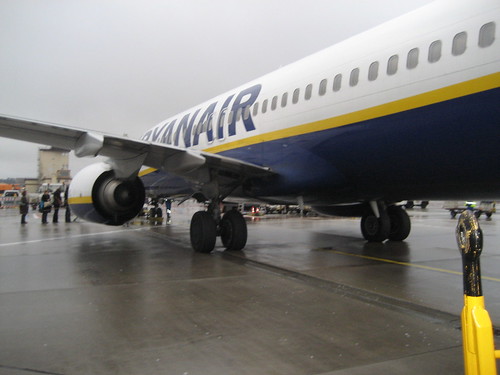 Ryanair: they keep you waiting for 1½ hours; but they won’t give you 1 minute extra to check-in, nor wait 5 seconds between taxiing and take-off.

The flight itself was without incident, and we landed at Madrid's main airport by about 1pm (thankfully, Madrid only has one airport — so Ryanair has no choice but to use it). I was straightaway greeted by a lovely dose of sunny Spanish weather. Once I was in the terminal and I'd collected my baggage, I then had to re-pack my bag with the extra 5kg that I'd pulled out of it in Frankfurt, and shlepped on board as carry-on luggage (they ostensibly limit your hand luggage to 1 bag and to 10kg; but it's such chaos boarding a Ryanair flight, that this is impossible for them to enforce).

The way that Ryanair operates really isn't that different to the way that easyJet operates — they both rush you on board, they both provide diddly-squat during the flight, and they both prefer to fly from/to inconvenient s$#%hole airports (where they get cheap rent). And yet, I can't help but feel much less impressed with Ryanair, than I was with easyJet. I think it's simply a matter of attitude: the staff at Ryanair are rude and obnoxious, and they seem to be specifically trained to tell you nothing, and to treat you like camel crap. The easyJet folks will at least give you a smile. But then again, I'm not alone in feeling that Ryanair sucks: they are officially the most complained-about airline (possibly the most complained-about company) in all of Europe.

Madrid airport was the usual deal that I've gotten used to within the EU: that is, border control simply doesn't exist. I quite literally collected my bag, and walked straight out of the airport: no passport check, no customs, no nothing. To get from the airport to the city centre, I had to take the metro. Now, I've heard many bad stories about petty theft in Spain, particularly about it being bad on the trains. People told me that it's even worse than in Italy; and of all people, I should know how bad Italian theft is. As such, I arrived in Madrid with a mindset of fear and of extreme caution.

However, all went fine. I didn't have to buy a ticket for the Metro: a generous Italian girl came up to me at the ticket machine, and gave me her ticket, which she said was good for another day, and which she didn't need anymore. Sweet! On the train itself, I was wary of everyone and everything around me: but I made it to central Madrid, and to my hostel, just fine. As long as Spain continues to be like this, I'll be a happy man.