Dune buggy and sandboarding in Huacachina

This afternoon, we went and did the number one activity and attraction that Huacachina has to offer (well, arguably number one): dune buggy riding, and sandboarding! After a super-relaxed day spent by the pool at Casa de Arena, our group of 7 (plus our driver) jumped into an all-terrain sand buggy, and roared off into the dunes, for a crazy ride in the buggy, and for some even crazier kamikazeing down the smooth, sandy slopes of the coastal desert. 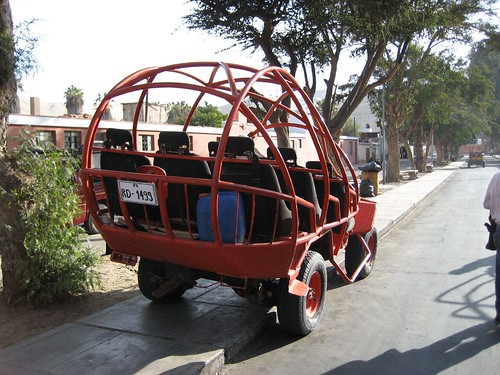 We were warned about the buggy drivers. And all the warnings that we'd received, turned out to be true. Our driver zoomed across the sand, going so fast that we could barely open our eyes, what with the rush of wind. He cleared massive bumps by roaring over them, and sending the vehicle flying as much as half a metre in the air, before continuing straight on with a bouncy landing. And I lost count of the number of times that he drove straight off the edges of cliff-like dune cornices, and gave us a roller-coaster of a ride down the other side of a dune. And all with a pleasant, relaxed smile on his sun-browned face.

Then there was the sandboarding — and if the buggy rides seemed insane, they were nothing compared with what we did out of the car. The buggy took us to the top of the dunes (doing the hard uphill work for us!), and then it was our job to race down them on our boards. When we went boarding in San Pedro, in Chile, we did it properly: we stood up on the boards, and surfed down the dunes as best we could. But here in Huacachina, the dunes were steeper and the sand was finer: even for the experienced snowboarders in the group, standing up was daym near impossible. 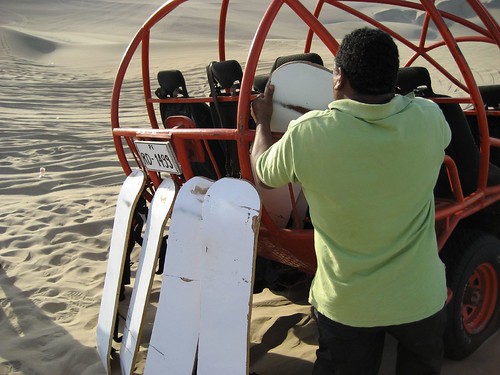 Taking the boards off the buggy.

We lay on the sandboards on our stomachs, and we zoomed down them head-first. For the first few dunes, I couldn't believe I was actually doing it: surely, this was suicide! But we all seemed to get down them like this, at insane speeds and with next-to-no control, absolutely fine. And it was a lot easier, and a lot more fun, than trying to sandboard properly. So the kamikaze-like dives down the dunes continued, for about 1½ hours.

When you kamikaze down the dunes, you're able to slow yourself a little bit, by digging your legs into the sand as you go. Most of our group ended up "braking" a little bit, as it was just too daym terrifying otherwise. We had two middle-aged "nanas" (as they called themselves) from Bunbury, WA, who went down with almost no braking — craziest old characters I've ever seen. And, of course, there were the obligatory two meshigena Israeli guys, fresh out of the army, who summed up their sandboarding strategy with the only two things that either of them said, the whole time: "no brakes"; and "one more time". Ma she hoo.

The final dune that we tackled was the most insane: near-vertical, really long, and with a massive run-off at the end, letting those who dared go full-throttle, without too much risk of — errr... — dying. We did that one three or four times: then we drove off to the western edge of the dunes, to see a positively gorgeous sunset, as the grand finale to our afternoon tour. 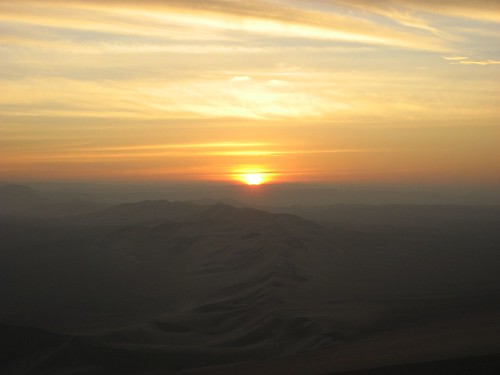 Sunset over the desert.

The sandboarding and the buggy riding that we did today was: slightly dangerous; rather mental; and totally kick-a$$. More than a little insane: but hey, you're only 21 and on top of the world once, right? If I can be like those crazy old ladies, and still be doing stuff like this at 60, I'll be one happy chappy. Like they say, you haven't lived 'til you've almost died.