After getting back down from Punta Union, the rest of the hiking in day 3 of the Santa Cruz hike was very pleasant. From lunchtime onwards, it was all downhill, through the Huaripampa river valley, to the camp of Paria. Beautiful scenery, much-improved weather, and a steady pace all the way. Plus, I bumped into my friend Angel. 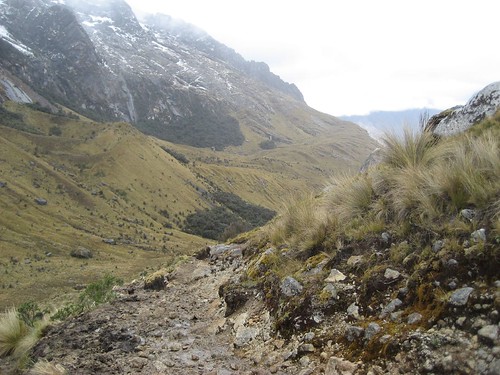 Start of the Huaripampa river valley.

Today's lunch was held next to one of the beautiful lagoons below Punta Union. Because of last night's storm, snow had fallen even as far down as here — but there was still enough dry and clear ground to have a meal on. I lost the Dutch group that I'd climbed up to Punta Union with — as they went a different way from here on, climbing another mountain pass instead of descending into the Huaripampa river valley — but I bumped into a new group, this time of French people. Scored a free bowl of fried rice from them, and had some new company for the rest of the day's hiking! 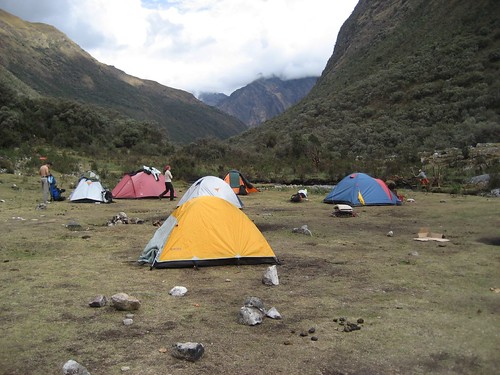 Camp at Paria — campsite for night 3.

Got down to the campsite of Paria by about 4pm, with plenty of time to set up tent, to get dinner ready, and to try and get my wet gear from last night a bit drier. Didn't end up camping next to the new-found French group — they camped above the main area, and I didn't see them up there — but I found a rag-tag little group of Poms, Americans, Froggies, and Italians, and spent the night with my tent near theirs. Nice bunch of people, except they were going the opposite way to me (doing the hike from Llanganuco to Santa Cruz, instead of vice versa).

Tonight's camping was a lot drier than last night's, but I still got rained on a little bit. Fortunately, it wasn't heavy enough to penetrate the tent this time. Tonight's camping was also the most pleasant I've had so far, as it was in a really nice spot — very snug, cosy, and green little campsite, with a gurgling river running right through — and with only a small group of people camped there with me, rather than the tent-city madness that I saw the previous two nights.