Yesterday I ascended and skirted the eastern edge of Mt. Etna, from the south-east corner northwards. This morning, the tour of Etna came to a close, as I headed down out of the foothills, and returned back to the Sicilian east coast. Sadly, there was no view of Etna to speak of, as the fog that I encountered while camping last night was still lingering and obscuring the view; nevertheless, it was a sweet and speedy downhill ride, and the villages along the way weren't bad either. From Camping Mareneve, I continued up to the town of Milo (only about 5 minutes further along the road); and once I was through Milo, the looong downhill began. I took the small turnoff for the village of Presa; and from there the road took me ever further down, to the town of Piedmonte Etneo, and then finally to the coastal town of Fiumefreddo di Sicilia. It was a bit cold, and a bit foggy; but very quick, and easy as can be. 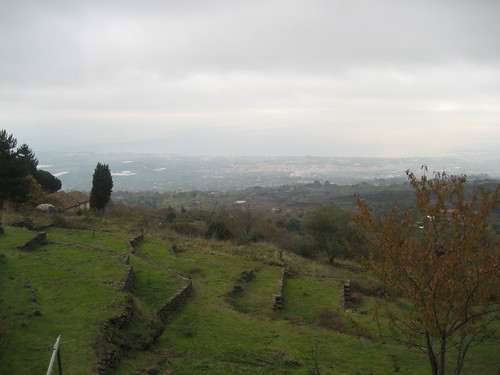 Long way down to the coast. 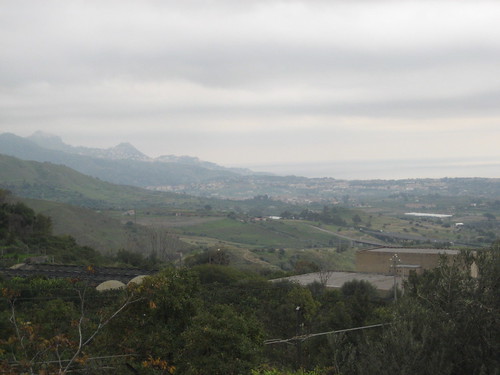 My path was fairly straightforward: I just had to keep going down, and to keep heading towards the sea. However, I did make one small navigational error along the way: I took the downhill turnoff that was one turn earlier than what I'd intended to take; and as such, I ended up bypassing the town of Vena, takng an unnecessary detour that swung south for a bit, and eventually ending up at Presa, where I was back on track. But it was really no big deal: it was still all downhill, so there was no wasted effort; plus I had more than enough time anyway.

As I descended, the mountain fog became lighter and thinner, and the view of the coast below became ever clearer. The villages along the way — particularly Presa and Piedmonte — were charming little affairs, although they were pretty dead when I whizzed through them. Once I hit the coast, it was a quick ride up to the resort town of Giardini Naxos — I made it there by 11am.