Arguably the most famous, and the most popular, tourist attraction in La Paz these days is the death road bike ride. A 3000m descent, from La Cumbre to Coroico. Downhill almost all the way. And fatally dangerous for much of the distance. Today, Chris and I did the ride, with B-Side Adventures (great company — but horrible web site). And we survived, and loved every minute of it.

The ride starts at almost the same altitude as La Paz (and La Paz is 3600m asl), at a place called La Cumbre. The first part of the ride is extremely cold — because of the altitude, and because it's early in the morning — but it's also fast and pleasant, because it's on a sealed road. Not really much danger in this first section, but great scenery. I was stupid enough to think that I'd "warm up" in this section, so for about the first 20 minutes, I didn't wear a jumper. Big mistake! Make sure you wear a jumper until you reach the death road itself, as it's too cold to get warm before then. 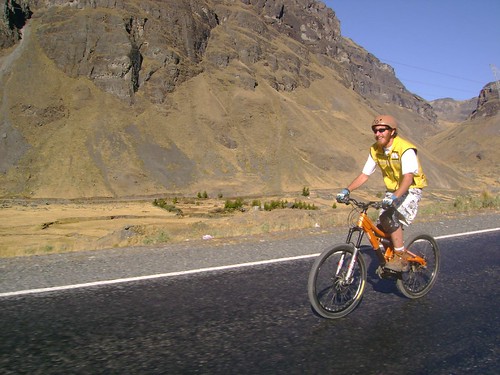 That’s me on the sealed section. Nice bikes, eh?

The sealed section is also the only bit with an uphill component. And even the uphill that it has is not very long, and not very hard. I'm a bit out of practice on the bike: but for a seasoned cyclist such as myself — even at such a high altitude — it was no biggie. Would have preferred a bit more uphill, to tell the truth: bit of exercise, and I could have done with a bit more warming up at the top.

After the sealed bit, we reached the death road itself. The road isn't quite as dangerous as it used to be, because they've opened a new alternate road down to Coroico, and almost all the vehicles now use that. But it's still pretty extreme. Unsealed, sharp turns, and drops of up to 500m on the side of the road in many places. Many vehicles have gone off the edge of the death road (there are numerous grave stones along the way), and quite a few cycling tourists have met their fate here as well (at times, as many as one every month). But in reality, if you take it easy on the turns, and you don't go faster than your guide, then the danger is pretty minimal. Most deaths on this road have happened for one practical reason or another: being careful and having some common sense is almost guaranteed to prevent accidents from happening. 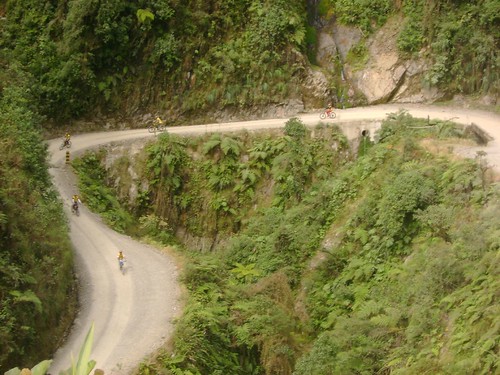 Tackling one of the hairier bends on the death road.

The death road itself takes about 4 hours to ride down. It's very fun: there are a number of straighter sections, where you can let it rip a bit; and there's also fantastic scenery all the way down (not that you're able to look at any of it, since you're too busy trying to stay alive!). As I said, it's very cold at the top; but the temperature (and the humidity) rapidly increases as you go down, until it's actually quite hot and sticky at the bottom. 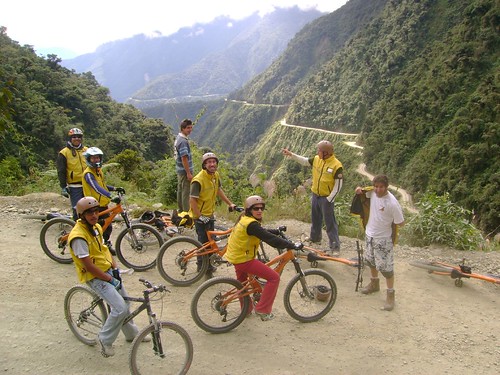 Pit stop on the way down.

When you reach the bottom, there's a great river crossing, that you ride through with a tremendous splash. After that, you come into a small village, where you see a lot of small children (just finished school — watch out for them, and don't hi-5 them — it's dangerous!), as well as various animals wandering round. When you get here, you've finished the ride, and you celebrate with a nice cold beer. 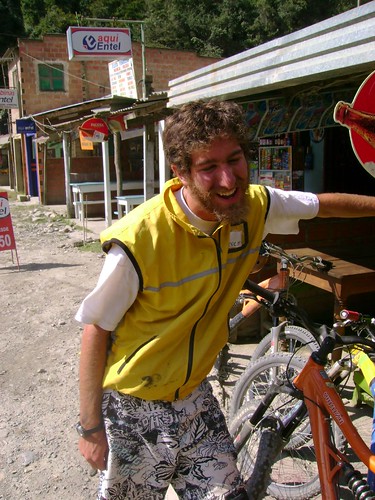 Me at the bottom, looking extremely tired for the camera.

To finish off the day, most of the tour companies (including B-Side) take you to one of the luxury hotels in Coroico for the afternoon, where you can have a shower and a swim, and enjoy a great buffet lunch. After that, it's back in the van, and up the 3000m rise, all the way back to La Paz. Nice, luxurious way to finish off an action-packed day. 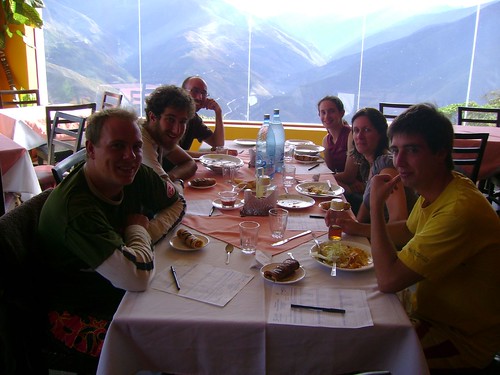 I really do recommend B-Side, if you're planning to do the death road yourself. They were recommended to me, and I can see why. They don't skimp on the bikes: they give everyone solid-as-rock Iron Horse downhill mountain bikes, with dual suspension, and with bloody powerful hydraulic disc brakes. They only go in small groups, and they watch out for you at all times: we had 7 people in our group, and we got 3 guides for the lot of us. Plus, they give you all the usual extras of lunch in a hotel in Coroico, photos and videos on CD, and a great t-shirt. They're just as good as the better-known companies, such as Gravity Assisted and Downhill Madness, but much better value (about USD$20 cheaper).

Once again, I really have to stress that despite its name, the death road is neither particularly dangerous nor particularly hard! Yes, it's very dangerous for drunk-slash-extremely-tired Bolivian truck and bus drivers, going down it at 3am in the morning, after 20 hours of driving without rest. And because there are so many of those, the death road has indeed become the road with the highest fatality rate in the world. But as an off-road bike track, it's very easy (pretty smooth most of the way, wide and flat too). And with all the help that you get from your guides, and the top-quality equipment that you hire from the companies, there's really nothing to worry about. Especially since the new road to Coroico has opened, and cyclists basically have the death road to themselves. Just don't try to be superman, and you'll have a great time.