These two sisters live in the town of Pachino — on the south-eastern tip of Sicily — but they study at the university in Ragusa. When I hit the storm from hell on this morning's ride from Ragusa to Modica, they happened to be driving by; and thus it was that they became my (most unlikely of) saviours. They managed to stuff both me and my bike into their super-tiny, super-crappy little hatchback car; and with barely enough room to change from 1st into 2nd gear, they gave me a lift the rest of the way to Modica. I'll never forget these two Sicilian angels, who saved me when I was in strife. 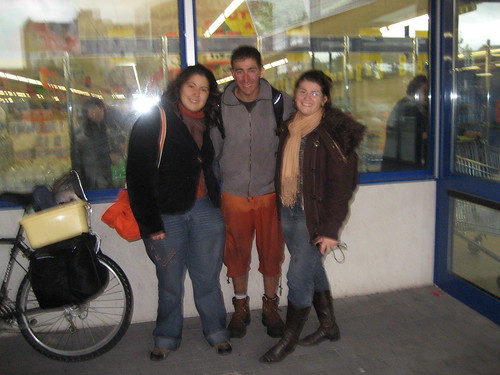 Myself with Cristina and Alessandra: if they excused my being dripping wet, then so can you.

While I rode along in the morning's storm — soaked, freezing and destitute — plenty of cars drove by. I saw more than a few luxury 4WDs, spacious utes and lorries, and big bloated delivery vans. I didn't hail any of them; but none of them stopped, either. All of those other cars would have accommodated myself and the bike much more easily. But no: it was these two crazy student girls who stopped — not because I hailed them, but simply because they felt sorry for me — and they stopped despite having barely enough room for themselves in the car, let alone for Yours Truly and Co. But that's the way it goes in life: some people zoom past an opportunity to help someone in need, even when they're well-equipped to lend a hand; while others go out of their way to help, despite them being ill-equipped for, and inconvenienced by, the detour.

It was a short but crazy road trip that I had, for the rest of my journey from Ragusa to Modica. Cristina and Alessandra spoke basic English: their English was better than my Italian, at any rate; and they were fluent enough to have a decent conversation with me. They told me all about how they're studying arts at the uni in Ragusa; how the rest of their family lives in nearby Pachino; and how they'd love to travel to Australia one day. They also asked me all about my trip; and after they repeatedly told me what a deranged lunatic I was, I quickly came to add the word "pazzo" (lit: "crazy") to my modest Italian vocabulary. I was still too cold and wet to really communicate properly; but I told them enough to satisfy their curiosity.

This was the first (and last) time that I've "cheated" on my Great Sicilian Ride — i.e. it's the only time during my entire stay in Sicily, that I've used any form of transport other than cycling. I'm a bit disappointed about this: I'll no longer be able to say with 100% honesty: "I've gone around the entire island of Sicily, and I went the whole way on my bicycle". However, it was a very short journey; and it really was in exceptionally difficult circumstances. Plus, I can say with absolute honesty that I did not ask for the lift: it was given without me hailing or signalling in any way; and really, I would have been not only mad, but also overly proud and stubborn, to have rejected the offer. So on the whole, I'm not ashamed of taking the lift, and I'm glad to have made some friends along the way.

Cristina and Alessandra drove me to a shopping centre on the outskirts of Modica, where they had to go looking for a new jacket to buy their dad. At the shopping centre, I was extremely frustrated by the sudden decision of my bike lock to stop working: despite over ½ an hour of vigorously wiggling the key around, it simply refused to open (I keep it locked around the front forks for storage); and so I was unable to lock up my bike. Not sure if this technical failure was a direct result of the storm, or if it was bound to happen anyway — the lock has been getting consistently harder to open over the past week — but regardless, this was just one more problem that I really didn't need dumped on me, with the day turning out quite %#&@ already. Anyway, I left the bike outside for a few minutes without problems; and once inside, I had a chance to use the centre's bathrooms, where I cleaned myself up and warmed my freezing hands a little bit.

In case they hadn't done enough charity for one day, the girls (before they said goodbye) insisted on buying me a hot coffee at the centre, and on presenting me with a great big pile of food supplies. They bought me a delicious focaccia with the coffee; plus (to my amusement) they also pulled out of their teeny car a collection of leftovers (apparently from a party last night), which included a bag of delicious pastries, and a generous portion of home-made lasagna. I'm not sure who's crazier, me or them — anyway, we both made each other laugh; and without their help, I don't think I would have been laughing very much at all today.