You can't say you've been to Argentina (or to South America, for that matter), until you've seen some live fútbol here. Tonight, I went off with the Clan crew to fulfil this sacred Latin backpacker's duty: we visited the stadium of the famous Boca Juniors, and watched Boca kick the a$$es off of São Pablo (a Brazilian team). It was a pretty easy victory for Boca, who beat their Portugese-speaking rivals 2-1. And as for the fans, with whom we were packed in at one of the (standing-room only) spectator areas: they were absolutely wild. Even if you're not crazy about fútbol, you still gotta go and see a Boca's game — it's a sight in itself, being chucked into the middle of a crowd for whom fútbol es la vida, y la vida es fútbol.

The Clan, along with several other hostels in BA, provides organised trips to the big fútbol games several times a week. With these trips, they arrange a bus to and from the game for you, and they buy your ticket for you. It's an absolute ripoff money-making machine — they charge 120 pesos for the service, and the ticket to the game is only 15 pesos — but in the case of Boca games, they're providing more than just the bus and the entry ticket. There's also the issue of security: Boca fans are so notoriously crazy and passionate (and the neighbourhood of La Boca is also not particularly safe), that it's highly advisable to go to a Boca game in a big group, with some tour people coming with and watching out for you. So I fed the ripoff machine, and came along on tonight's organised trip to the game.

We got to the stadium at about 8:30pm, but the game didn't start until 9:45pm. Not sure why we had to get there so early — it didn't get crowded until 9:30pm or so, and it was standing-room only anyway — although it was kinda cool to watch the place fill up, and to observe the fans "warming up" in preparation for their in-game cheering. By the time the game started, the stadium was about 80% full — must have been at least 40,000 people there — and the crowd was livid. 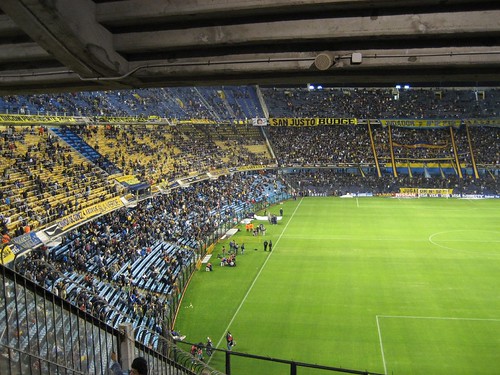 The stadium filling up, at the start.

The sexy Boca cheerleader squad (daym, I knew I should have bought a camera with a bigger zoom :P).

The crowd that I went with including mainly Irish people, but also a few other Aussies, and also Sebastian. We tried to cheer as hard as the locals: but of course, we couldn't nearly match them for sheer gusto. There was one guy in particular — he was sitting behind us — who didn't stop screaming the entire game: when he wasn't madly commentating, he was either swearing utter filth at the opposing team, or jumping up and down in a virtual seizure. This guy was pretty rotten to the Brazilians: he called them all sorts of things, such as "ijo la puta" ("son of a whore"), "concha la madre / hermana / ija" ("your mother's / sister's / daughter's $%#&"), and "boludo" ("a$$holes"); but the one that I found really shocking (and he said it every 10 seconds) was "negro puto" ("black faggot"). Apparently, when it comes to fútbol, there's no limit to how low it can go around here. 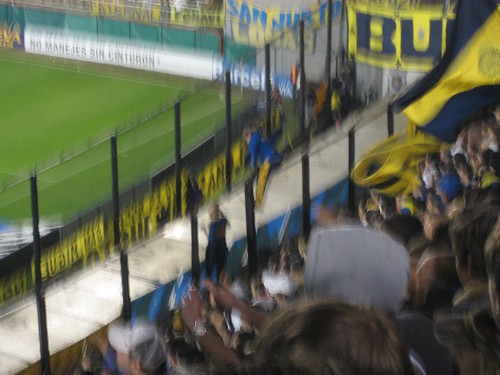 Crazy Boca fan climbs over the security fence to get a better view. 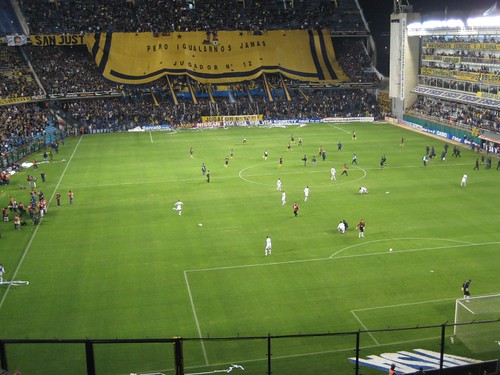 The stadium full, and the players preparing to kick-off on the field. 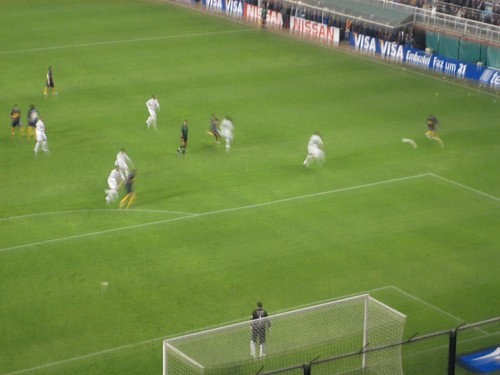 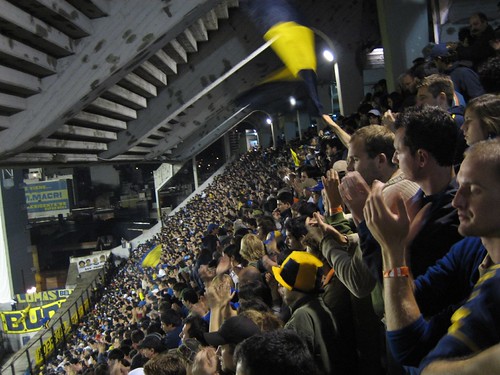 The crowd was wild and deafening during the entire game. They were jumping up and down, chanting numerous "Boca anthems", and hooting and roaring from beginning to end. However, on the two occasions that Boca scored a goal, they made the rest of the game look positively tame. I'm amazed they didn't send the whole place crashing down, just by the sheer amount of jumping and screaming that went on during these two moments. 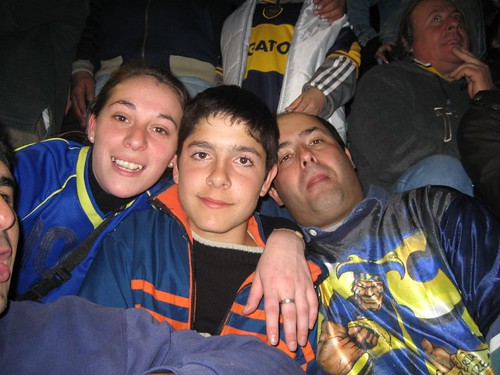 Meshugenas who were sitting behind me (they look scarier in real life, I swear). 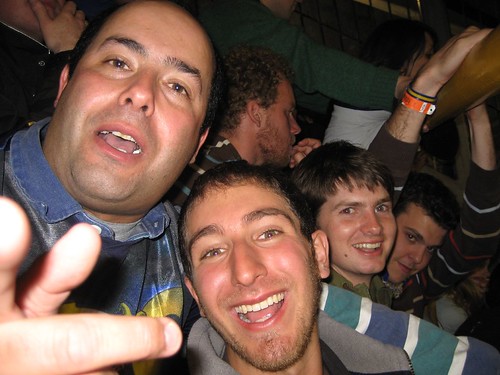 Alright, so maybe I went a bit crazy too during the game — but hey, when in Rome…

Our gringo group survived the game relatively unscathed. There was one guy who tried to pickpocket a few people: but he did it so badly, that the people he tried it on actually pulled his hands out of their pockets, and told him to f$%# off. The crowds were total animals, but as far as I know nobody got hurt in the revelry. After the game finished, we waited a little bit for the crowds to pour out in front of us, before attempting to get out of the stadium ourselves, and to get back on our bus out of La Boca.

Para mi, fútbol no es la vida (lit: "for me, soccer isn't life"), but I have to say that I really enjoyed tonight's game. Fútbol is clearly such a central and an integral part of the life of every argentino, that if you haven't experienced it, you've missed out on discovering a huge part of the local culture. And there's no argentino that takes his or her (oh yeah, the girls are just as mad about it as the guys!) fútbol more seriously, than a BA Boca Juniors fan.