Did a fun little day-tour today: downhill mountain-bike riding, on dirt tracks down Volcan Cotopaxi. This is a very popular tour, and one that you can easily arrange from a number of towns, including Quito and Baños. It was very cold at the top, but once we were headed down, we soon warmed up. Had a daredevil group, enjoyed the lovely scenery of Parque Nacional Cotopaxi, and got well taken care of during the day (transport-wise, food-wise, etc). A bit of a bumpy ride — but after the Death Road in Bolivia, you can do anything.

The tour started off on an extremely bad note this morning. As I agreed with them yesterday, I was meant to be going on this tour with Gulliver's, the agency that failed to get me on a mountain-climbing tour of Cotopaxi today. When I phoned them yesterday, Gulliver's told me to meet at the Coffee Tree Café, at 7am this morning, to go on the bike-riding tour with them. Well, what do you know, they ditched me again: got there at 7am, right on time; only to hear from the café staff that they'd left without me, 5 minutes earlier.

Oh my g-d, I was sooo pi$$ed! I almost burst into tears: how could they do this to me? How was it humanly possible for them to doubly screw me over, that badly? In all the countless tours I've done, and tour agencies I've dealt with on this trip, I've never before had anything like this happen. There I was, standing on the street at 7am, suddenly with no plans for the entire day — what the hell was I supposed to do? I considered murdering a small animal: that would have been a good start to unleashing my fury.

Miraculously, however, I still ended up managing to go bike-riding today, albeit with a different company. After this heart-wrenching letdown, I walked down the street a few metres, and saw the van of the Biking Dutchman parked down the road, outside another early-bird café. I asked them if there was any possibility that I could jump on the tour with them today: and since they had 2 people who didn't show up, they said "sure". So I was off to Cotopaxi, despite the best efforts of Gulliver's to keep me away from it!

My companions for the day were: a Canadian brother and sister (originally from Ontario); an English family (mum, dad, daughter); and a big group of Americans, down here for the 2007 International Youth World Championships in Rock Climbing, being held in a few days in Ibarra (north of Quito). Since the Canadians, the English, and myself were in one van, we were able to pay out Americans the whole way there and back, without any fear of reprisal. :P

Once we were off and on our way out of Quito, it took over 2 hours for our 2 vans — their roofs laden with tough new mountain-bikes — to reach the entrance to Parque Nacional Cotopaxi, and to then proceed through the park, to the slopes of Cotopaxi itself. As soon as you get off the main road, and start heading into the park, the bitumen gives way to dirt and rocks: lucky we were all in 4WDs.

At the park entrance, we each had to pay the park entrance fee of $10. There were also a bunch of women from nearby villages, who had set up a few stalls just next to the entrance, chockers full of everything alpaca — i.e. gloves, beanies, jumpers, socks, etc — for all those who were worried about it being cold at the top. I didn't buy anything here, of course (I don't go for the alpaca stuff at the best of times, and definitely not in a tourist-trap spot like this!): but most of my companions were newbies down here in South America, so they stocked up on some locally-made, hand-knitted alpaca warmth.

As we drove through the park, towards the looming mass of Cotopaxi, we noticed that the weather wasn't exactly perfect: very cloudy, and quite windy as well. Maybe it was for the best that I'm not climbing to the top of Cotopaxi today? Anyway, the weather wasn't so bad that it completely obscured the scenery: and that was a good thing, because the scenery was not to be missed. Very bleak, by Ecuadorian standards: big grassy plains; dirt and little shrubs peppering the landscape; and all around, hunks of volcanic rock lying in the grass. Reminded me a bit of the arid, grassy hills of Kosciusko National Park back home: except that the rocks here were freshly-spewed lava only 200 years ago, as opposed to several million years ago. 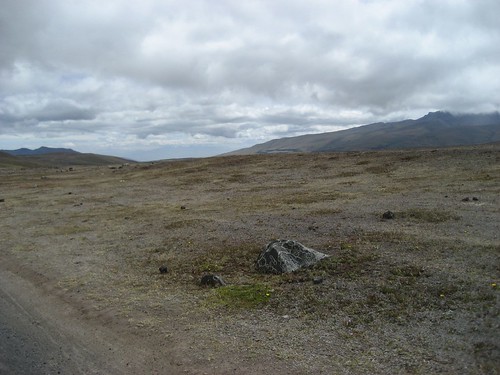 We reached the carpark on the slopes of Cotopaxi, which is at an altitude of 4,500m asl, about 200m below the climbers' base camp. This was the spot from where we would begin the ride. Our guides stopped here, unloaded the bikes from off the roofs, and got all our equipment out. We got out of the vans as well, but it was really cold, and really windy — so we took refuge inside the vans, until we absolutely had to get out. Luckily, the guides also brought some extra jackets, one of which I gladly borrowed for the ride down. They were also thoughtful enough to make us some nice, hot tea, to prepare us for the downhill challenge. 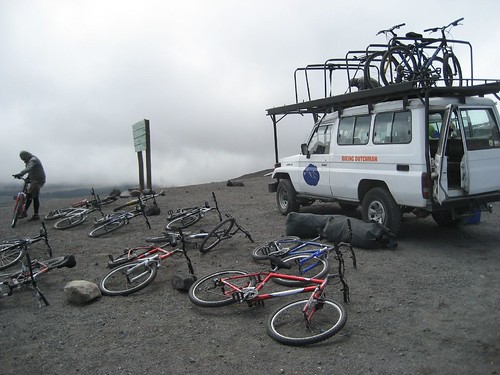 Unloading the bikes at the carpark.

The first 15 minutes or so of riding were the steepest — this was the time when we actually rode down Cotopaxi itself — and they were also very cold. Even with gloves and a jacket on, I was still chilled to the bone. And my hands were so cold, that I had to stop every few minutes to warm them up: I really needed to keep them warm, because I had to brake pretty hard, on the steep and bumpy dirt road. It was good fun: all downhill, so absolutely no peddling needed; the only requirement was raw guts. 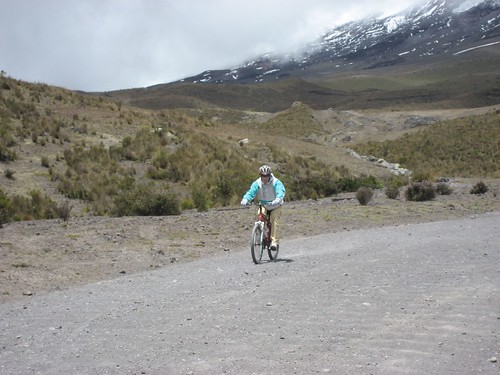 Someone riding down, at the bottom of the first section.

After the first section, it was fairly warm and fairly flat the whole way. However, it was quite dirty, bumpy and rocky the entire time. Our group followed the guide through the trails, having fun on the 4WD terrain (the 4WD vans were also following us), and enjoying the pleasant surroundings. We had a nice picnic lunch, out on the grasslands, in the middle of the ride. All up, it must have been about 3 hours of riding during the day. 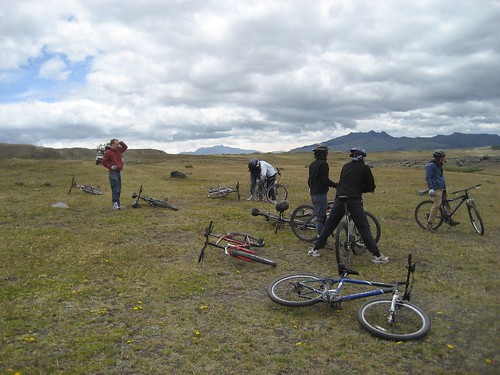 At the lunch spot. 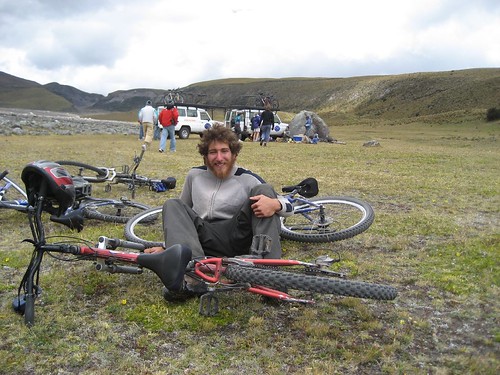 Posing with my bike.

We finished towards the northern entrance to the park, where we packed up our stuff, and headed back to Quito. All up, a very enjoyable day. Just lucky that it happened at all!