I really love cycling, and I haven't done nearly enough of it on this trip. Since the 60km stretch of road from Baños to Puyo is considered the best and the most popular bike ride in Ecuador, there's no way that I was going to miss out on it. Along with Patrick, I rented a bike in Baños this morning (usual $5 for-the-day deal, from one of the tour agencies in town), and we were on the road by about 10am. Beautiful scenery, great stops along the way, relatively easy riding (downhill most of the time), and reasonable weather. And, of course, the great feeling of being back on a bike all day long.

The ride to Puyo is extremely popular: every man and his dog who comes to Baños does it; and scores of tour agencies in town rent bikes, to help you out. We were lucky enough to even pick an agency that gave us a small kit of pump, spare tyre, and lock-and-chain (plus a helmet each: not to be taken for granted in Latin America!) — luckily, we didn't end up needing the emergency gear. Due to this popularity, it's better to leave early and to avoid the crowds; sadly, we failed to get up in time to achieve this (I wonder why?), so we had a more-than-desired amount of cycling company once on the road. 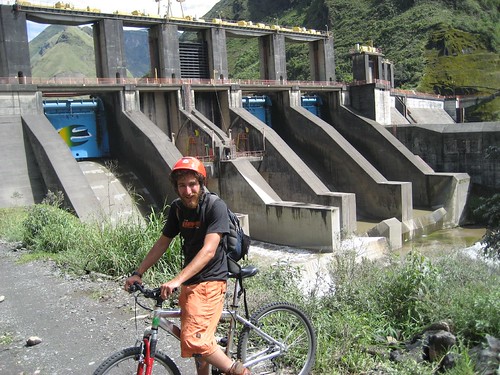 Stopping to admire a river dam, early on in the ride.

Our first proper stop for the day was at the bridge jumping spot, where about 50 cyclists had stopped and left their bikes by the road — some to go and do the jump, others to watch or to wait for their friends. After that, it wasn't long until we reached our second big stop, the walk to the Pailon Del Diablo waterfall, where we also had lunch. Both of these stops used up a lot of time: but they were both worth it; and we had all day anyway.

The scenery along the ride was gorgeous the whole way. As well as Pailon Del Diablo, we also saw scores of other, smaller waterfalls — after all, it is called "Ruta de las Cascadas" (lit: "Route of the Waterfalls"). And plenty more of that great, rolling, mountainous jungle terrain most of the way as well. Towards the end, when we got near Puyo, the mountains started giving way to big, jungly plains — made the riding nice and flat, although the scenery wasn't so spectacular. 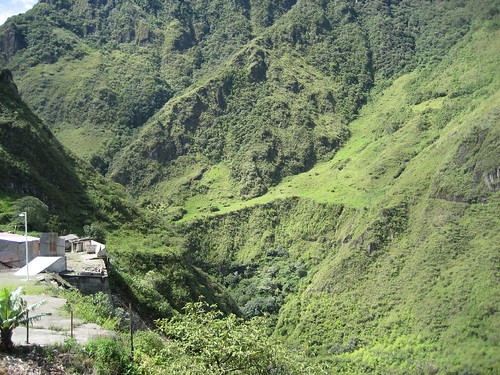 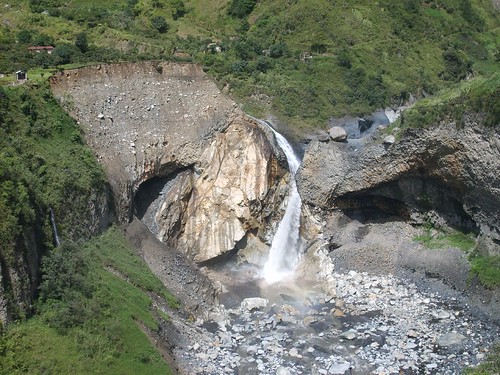 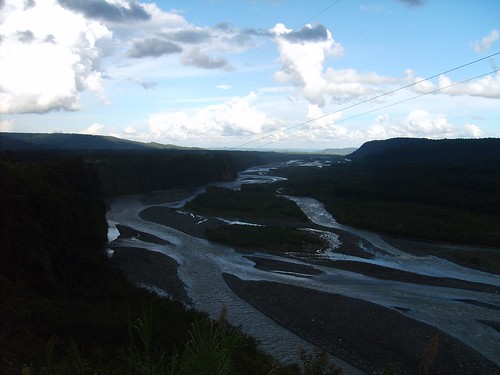 Giving way to flat jungle as we approach Puyo.

The first half of the day was very easy riding, because it was downhill all the way, and because we made so many stops at all the big sights. The second half, however, was much more intense. The middle 20km of the ride — roughly between the towns of Rio Negro and Shell — were quite tough, with a lot of winding uphill sections. I didn't really struggle with them, as I'm a fairly strong rider; but for Patrick, they were quite challenging, and he didn't find them very enjoyable at all.

We made good time getting to Puyo: we arrived in town at about 5pm, in time to buy a ticket on the 5:30pm bus back to Baños (and you put the bikes on the roof of the bus). Puyo is not a very attractive town: nothing much to see there; and the whole place is quite flat, industrial, and ugly. I can see why people just ride there, and they don't hang around or anything, like in Baños. We were also very lucky, in that we beat the rain: once we were on the bus back, it really started pouring, and it wouldn't have been fun at all, riding through rain like that on a winding mountain road.

The bus got back to Baños by 6:30pm, in time for us to return the bikes, and to clean ourselves up with a shower. Pity that we're staying at Patty, with its notorious lack of hot water: could have seriously used a hot shower this evening. Anyway, it was a great day's riding: I'll have to see if I can do some more bike trips, sometime in the near future.