Last Thursday was the 5th birthday of Amigos; and today was the school's birthday party extravaganza. We celebrated by going to the park this morning, and having some heated high-altitude games of fútbol (soccer) and basket (basketball). This was followed by a big, tasty lunch at a good polleria (BBQ chicken restaurant) and some really good, really chunky torta (cake). Then, the party continued at night, over more than a few alcoholic beverages, and then on the dance floor. 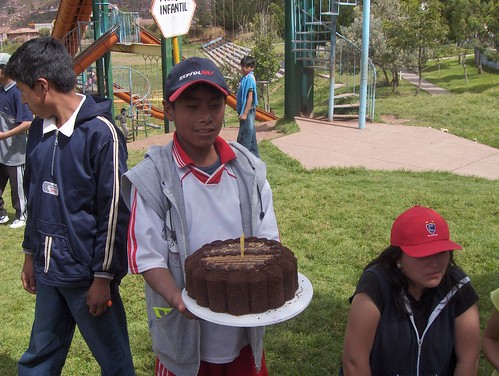 The birthday bash began this morning, at Parque Coripata, which is high up on the hillside, not far from the centre of Cusco. The sun was shining down on us, and we had a good turnout of English students (local kids), Spanish students (such as myself), and teachers. We began with a few games of basket. I didn't do too bad at this, but I got pretty out of breath pretty quickly, more from the thin Cusco air than from anything else. Louis was the basket star, scoring slam dunk after slam dunk all morning long. 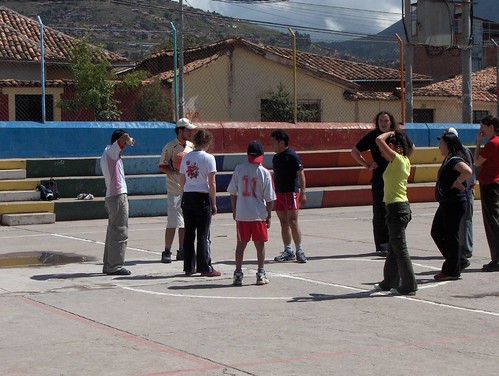 On the basket court.

Then, we got more serious, and switched to the only real game that there is in this part of the world: fútbol. The local kids are of course all experts. Us gringos were chicken$%&@ compared to them. I in particular was absolutely hopeless: my soccer skills are pitiable at the best of times, and at this altitude, it definitely wasn't the best of times. But we had plenty of fun, and it was all nice and friendly anyway. 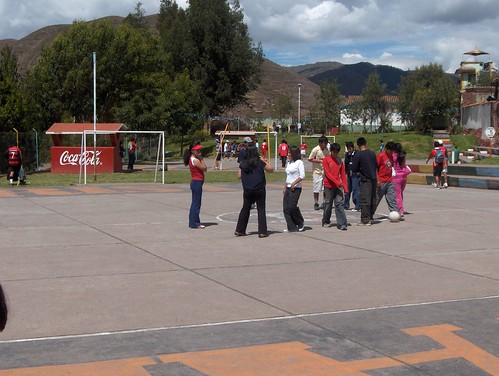 We only had the fútbol area booked until midday; so after that, we just hung out at the park for a bit, shmoozing, and going on some of the equipment there. The park has a really big slippery dip — it goes down about 20m, and it gets steeper towards the end — and we all had plenty of heart-pumping turns on that. They'd never let a slide like that get put up in a kid's park in Australia — lawsuit waiting to happen — but here in Peru, thank G-d, the concept of "survival of the stupidest and most litigation trigger-happy" has not yet arrived.

There were also see-saws, monkey bars, and other fun little bits of equipment to play on. Kids, older students, and teachers alike, all had a ball playing on it. 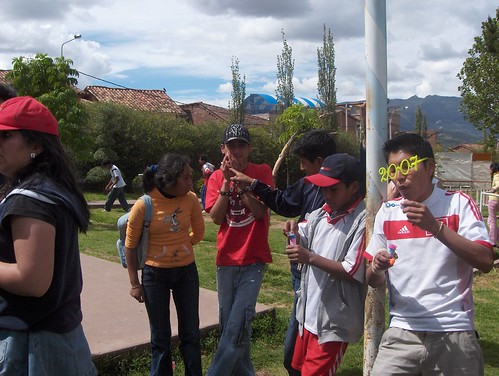 The kids having fun in the park.

There was a little ceremony in the park, with some speeches by Jesus and Co, in honour of the school's birthday. We didn't actually eat the tortas in the park, but we did light some candles on them, and sing "happy birthday" (in English and in Spanish).

Lunch was a big affair. More than 20 of us piled into the upstairs room of one of Cusco's many fine pollerias (they can't get enough of their pollo con papas, or BBQ chicken and chips, here in Peru), and constructed one massive table to sit at. The standard polleria dish of pollo con papas was in abundance for all. We gorged ourselves silly on pollo, and then we still had room for more, when we cut up the two massive tortas, and devoured them as well. 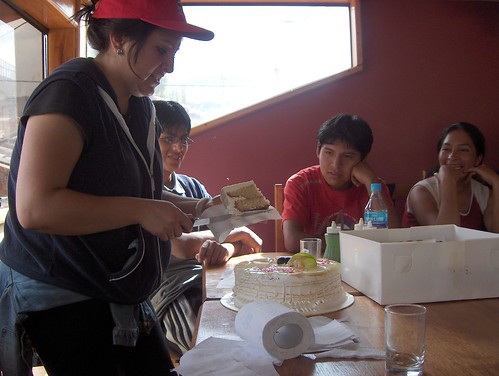 The torta blanca was popular, but the torta chocolaté brought the house down.

We had the afternoon to ourselves, to go home and relax. But then the party continued this evening, when some of the more dedicated (and 18+) among us rendezvoused for some dinner. The dinner (gourmet pizza) was followed by wine drinking, cocktail drinking, and a fun night of clubbing and dancing on the town. All in all, a great birthday bash for Amigos.