I really can't believe that Vancouver is one of Canada's warmer cities, and that I'm visiting it at a warmer time of year, and that it's still the coldest city I've ever been in. I hate to imagine how cold the rest of Canada is! However, cold aside, Vancouver is an absolutely gorgeous place, with a combination of harbour, islands, bridges, and mountains that simply dazzle the eye. Pity that I couldn't have stayed here longer on this trip, because I certainly could imagine being able to get quite comfortable here. 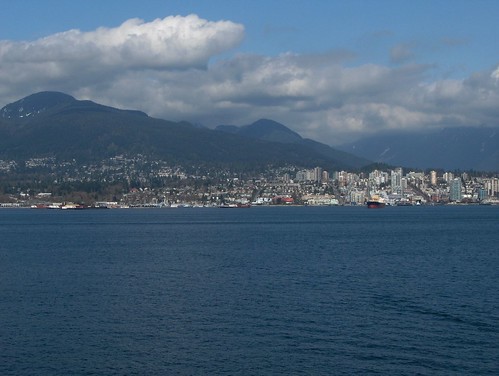 View of the harbour and north shore from Vancouver’s Canada Place.

For my final few hours in Vancouver this afternoon, Genna took me on a little tour of the Steveston Village area. This is a beautiful little wharf and seafood spot, nestled at the very bottom of Richmond Island, and overlooking the Gulf of Georgia. It's also apparently the oldest part of Vancouver. This is where Vancouver started, as little more than a modest fishing village. There are great restaurants, great cafés, and great ice-cream shops along the boardwalk here.

Shabbos at the Cohens

Tonight was my first family Shabbos dinner since leaving home, almost six weeks ago. I have to say, it's more than nice to do this once in a while: it's actually very important. All the Cohens were home for Erev Shabbat, except for Andy, who was orchestrating an inter-school dance that happened at his school this evening. Beautiful dinner, beautiful atmosphere.

When I was at home back in Australia, I had a massive arsenal of clothing, and I generally wore things for quite a short time. However, since I've been on the road, I've had a much more modest arsenal at my disposal, and this has forced me to wear things for (even) longer than I usually would. The net result of this is that I end up washing my clothes at about the same frequency as I did previously. In my case, this is about once every 2-3 weeks. Hence, we have the core of what I shall now dub Jaza's law of washing: the amount of clothes and the time spent wearing them may vary, but the period between each wash remains constant.

Yesterday I went skiing at Grouse Mountain. But today I had another day to kill. And one day of skiing isn't enough, anyway. So today I tried Vancouver's other ridiculously-close-to-the-city ski park, Cypress Mountain. As with Grouse, this place has great snow (even at the end of the season), great terrain (and more of it than Grouse), and great convenience.

The Cohens of Vancouver

The Cohens are the family that I'm staying with during my 5 days up in Vancouver, and in Canada. They live in Richmond, which is (technically) an island south of the main part of the city, and which is also where the airport can be found. The Cohens are: Nanci (mom); Stuart (dad); Genna (sister senior, who I met last year in Sydney, through the AUJS Revue); Andy (younger bro 1); and David (younger bro 2). There is also Grandma (from Montreal), who's staying there at the moment (she came primarily for David's barmitzvah, which was 2 weeks ago).

I met Athena up at Grouse today. We happened to both be hiring skis at the same time, and then we kept bumping into each other on the slopes all day, and doing a few runs together now and then. Athena's orignally from Melbourne, but she spends most of her time these days working on an organic veggie farm in California. Yep, that's right, folks: she's a major hippie (she has an impressive head of dreads, too). Today was her first time skiing in 12 years, but she said that when she was little, she used to go to Mt Bullah (in Victoria, Australia) all the time.

The people of Vancouver are ridiculously over-spoiled, as far as skiing goes. Today, I went over to Grouse Mountain, which is a fully-equipped ski park that's virtually inside the city! Apart from accommodation, Grouse has everything it needs in order to call itself a resort: runs for skiers and boarders of all levels; chairlifts; ski and board hire; and all the other usual facilities you'd expect to find on the slopes. And, although it's not a terribly big place, Grouse has enough challenging terrain to keep you busy for a full day.

I didn't really have any plans for today, and all the members of the Cohen family (whom I'm staying with here in Vancouver) were busy with work or study all day, so I decided to take a trip downtown. Vancouver is nice and easy to get around, with its great bus system, and the weather was fine and sunny too (if a bit cold). I went and checked out the Broadway area first, then I continued on to the main downtown district.

I've made it to Vancouver, and I'm (probably) going to be spending my whole time in this city sleeping here at Genna's house. Genna's house is in Richmond, which is a very suburban area in the southern part of Vancouver. It's ultra-neat-and-tidy, ultra-spread-out, and ultra-middle-America-of-Canada. Being back in the suburbs — and back in a house with a family — is a big change from the many hostels I've been staying at lately, but it's a nice and a very welcome change.