Beautiful island in Lake Titicaca, and the principal island on the Bolivian side of the lake. Isla Del Sol is a sacred island for the people of both Peru and Bolivia; as according to Inca mythology, it is the birthplace of the sun. I spent one night on this island, in a guesthouse, and I did the 3-hour walk from the southern to the northern end of the island. 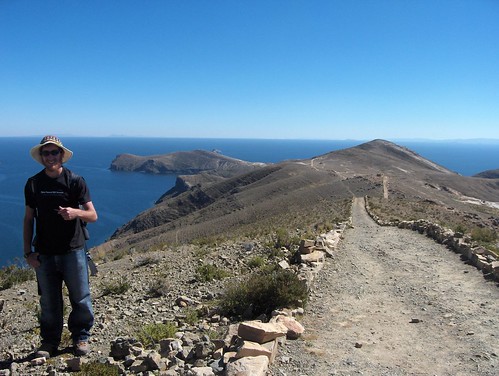 View of the north end of Isla Del Sol.

We finished our morning's hike to the northern end of Isla Del Sol, just in time to reach the town near the northern ruins, 15 minutes after the last public boat back south took off. We got there at 2pm, and the boat had left at 1:45pm. Bit of a bummer: especially since various locals had assured us that the boat didn't leave until 2pm. But hey, I guess you can't exactly trust the locals' word around here. Anyway, we had to share the cost of a private boat back instead.

Ralph's a retired primary school teacher, who — when he's not hiking in exotic locations around the world, such as Nepal — enjoys living a quiet life on his hobby farm in north-western Tasmania. Met him on Isla Del Sol this morning, on our hike to the northern end of the island; and ended up chatting to him a fair bit about life and travel. Real character, and an incredibly warm guy.

We met Pascale at our guesthouse on Isla Del Sol this morning; and we ended up going back to Copacabana with her this evening, and then continuing on to La Paz with her the next day. She's a true Parisian: enjoying fine food and fine wine; somewhat blasé about the world around her; and smoking like a chimney. Likes to get up early, and likes to lounge in cafés for long periods of time.

We did a good thorough hike of Isla Del Sol this morning, from south to north, and we saw the ancient ruins and rock carvings at the northern end of the island. It started out being just myself, Chris, Pascale, and Tony; but we ended up being joined by Ralph, two Kiwis, and two Americans along the way.

Tony has to be the most memorable character on my trip so far. Met him at our guesthouse on Isla Del Sol this evening, watching the sun set through the lens of his colossal Sony camera. Tony's a 60-year-old Chinese guy who escaped the Cultural Revolution in China in 1970, by swimming across the sea to Hong Kong. He now lives with his wife and two kids in Milwaukee, Wisconsin, where he's semi-retired (runs a family restaurant). He's obsessed with trekking (and with windsurfing), and he regularly traverses the globe in search of remote romps and lonely peaks.

On the Peruvian side of Lake Titicaca, they speak Quechua — just like in Cusco, and in most of the highlands of Peru — the language of the Incas. But here on the Bolivian side, they speak Aymara, the language of the altiplano ("high plains"). Apparently, the lake is not just the border between two countries. It's also the border between two languages, and between the two ancient cultures behind them. Looks like I won't be needing my Quechua phrasebook anymore (not that it helped, anyway — Quechua is downright impossible to learn).

After only one day in Bolivia, I've already met my first two (of many) stark raving mad locals. These two cute little girls from Isla Del Sol demanded chocolate from us numerous times. When we refused, they explained how their parents are dead — "viven en el cielo" (lit: "they live in the sky") — and when we gave them some, they burst into hysterical laughter.

Took about two hours to ride the long but pleasant ferry from Copacabana to Isla Del Sol ("Island of the Sun") this afternoon. Once we reached the island, we were given a guided tour — after, of course, repeatedly insisting "no queremos un guia" (lit: "we don't want a guide") — of the nearby southern ruins. Nothing spectacular, but a nice, relaxed introduction to the island.