Along with easy terrain and fabulous weather, today was also a day of only a short time spent on the road. The reason: I was too busy to cycle much, as I had so many of these Sicilian Greek ruins to see :P. From Eraclea Minoa, it was another two hours or so of pleasant coastal riding, before I reached the big city of Agrigento, and its neighbouring site "Valle dei Templi" (lit: "Valley of the Temples") — probably the largest, the most impressive, and the best-known of all the archaeological ruins in Sicily. And it was lucky I got there by lunchtime: because the valley is quite expansive, and I needed several hours to explore it thoroughly, and to really appreciate it and to soak it all up. For any semi-serious visitor to Sicily, the Valle dei Templi is not to be missed: it may be a bit crowded (even in November), but it really does blow you away.

Just before I reached Agrigento, I stopped in a little petrol station coffee bar (in Porto Empédocle), for the obligatory day's hot choc and pastry. I was the only person in the bar: the staff were very friendly, and very impressed with my crazy bike, and with the fact that I've been riding it for 10 days straight, all the way around the island. They were so impressed, in fact, that when I came up to pay for my hot choc and my wagon-wheels, they refused to take my money! First the free entry at Eraclea Minoa, and now this — really, it's too much kindness for one day.

From there, it wasn't too much further to Agrigento — from where I whizzed through the lower city, and rode straight down to the Valle dei Templi. And don't you worry: the morning's kindness was more than made up-for down here; because this is a big tourist site, and they ain't interested in being nice or discount-friendly to nobody. I was quite taken-aback by their unfair policy, actually. When I asked for a student discount, they enquired as to what type of student I was. I replied (stupidly) that I study informatica — to which they responded: "sorry, but for non-EU citizens, we only give discounts to students of archaeology, architecture, or art history". What a rort — stingy pr$cks! Anyway, it was still worth paying the full price, in order to see these babies. 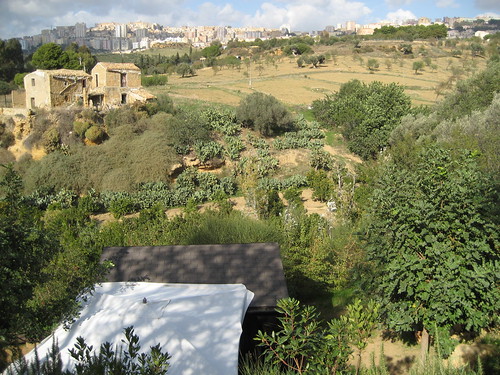 The Valle dei Templi is divided into two distinct parts: the western zone, and the eastern zone; the two are separated by the main road through the valley, and there are separate entrance gates on each side (the ticket covers both sides). Once I'd purchased my (full-price) ticket — and locked up my bike (in front of the ticket booth, where the sales lady promised to keep an eye on it) — I began my tour of the ruins on the western side. The western side is less impressive than the eastern side, as most of the ruins in it are largely rubble — however, there are a few things there that shouldn't be missed.

The private garden is one thing that can be missed. It was also the first thing that I attempted to visit. When I reached it, I discovered that even though it's inside the western entrance gate, you have to pay an additional fee to go and see it. It's at the bottom of a valley, and you can squiz out a fair bit of it from the top: ostensibly, it's "an amazing experience" actually walking through it. Yeah, right — like I was going to get ripped off even more today! I gave the garden a miss, and continued wandering around.

The biggest attraction on the western side is the ruined temple. Once a rival to its counterparts on the other side of the valley, this temple is a sad shadow of its former self — a mere four columns of it remain. However, it's quite striking in its desolation, surrounded by flattened boulders and bits of quarried rock — I can see why even though it's not much, it's still one of the parts you see most commonly photographed in the guidebooks, and it's still one of the most memorable parts of the park. 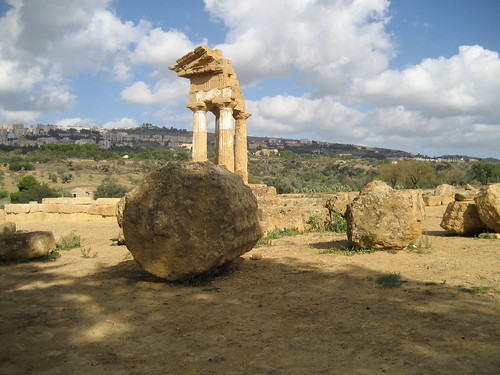 Main temple of the western side of the archaeological park — only four columns of it remain, but it’s still impressive. 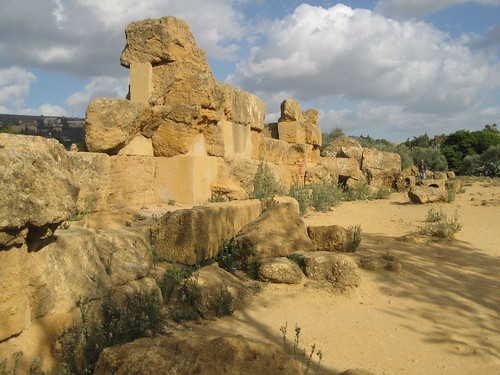 Ruins on the western side are largely crumbled. 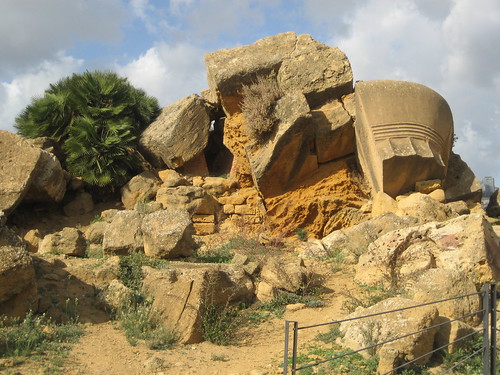 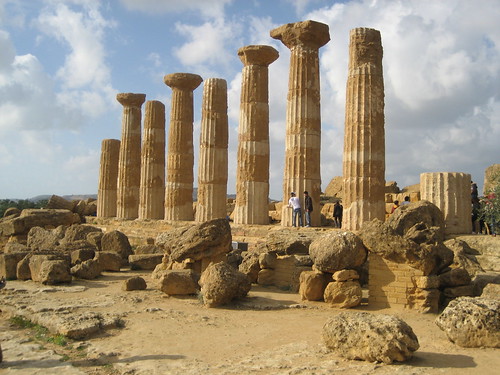 Temple that you see upon entering the impressive eastern side of the park.

The western side is nice and quiet, and it's good to wander around and to get a feel for. This is in contrast to the eastern side, which I wandered over to next. The eastern side is all about grandeur and majesty — and as such, it's also a lot more popular with the crowds. When I arrived on the eastern side, I was immediately confronted with a trucklod of school groups, old-fart organised-trip groups, and Japanese Sony-digital-accessory lifestyle-catalogue groups — a bit daunting and depressing, to say the least.

Nevertheless, there's simply no denying that the temples on this side are utterly spectacular. Of the three big temples here, the middle is the only one that's fully preserved — in fact, it is the best-preserved Greek temple in the world (better-preserved than any in Greece itself), due to the fact that it was converted into a church some centuries ago, which continued functioning almost until modern times. The far temple isn't in as good condition — but its flung-away hilltop position, and its sweeping vista of the rest of the complex (not to mention of the gorgeous sea and countryside all around), are testament to the fact that it was once the temple of prime importance in this valley. 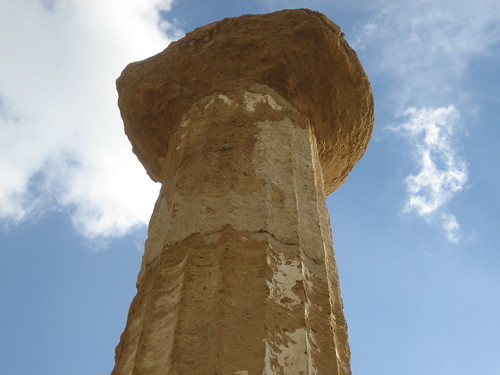 Pillar looks to the sky. 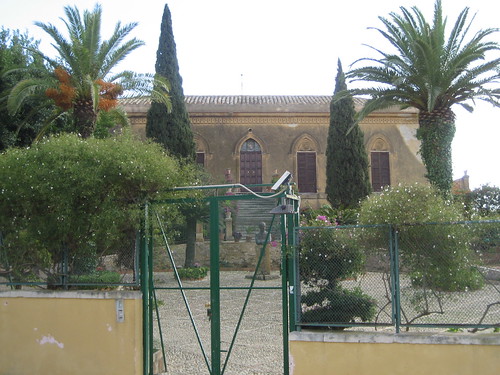 House of the Englishman who was the chief archaeologist here, around 100 years ago (one must have one’s executive residence, after all — still private to this day). 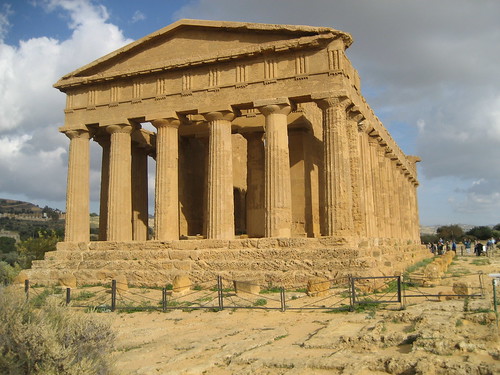 Main temple on the eastern side — the highlight of the valley. 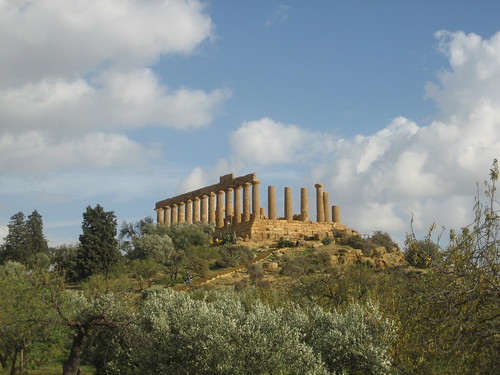 Semi-ruined temple at the far east end: the head of the complex, back in its day. 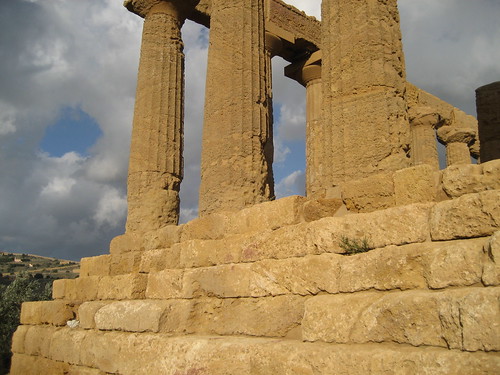 Solid base of the far-east temple is still totally intact. 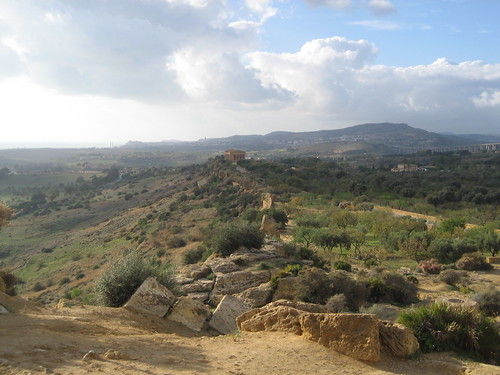 View back through the valley, from the far-east temple. 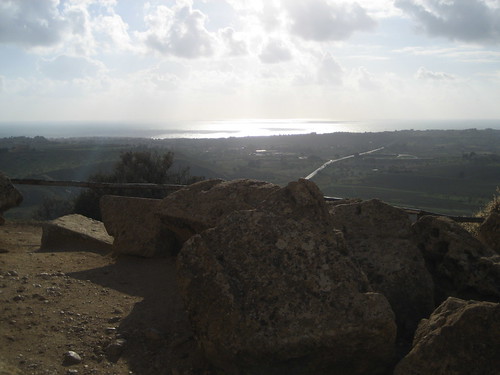 Sweeping views of the sea and countryside from the far-east temple.

Including a break for lunch, it took me a good 2½ hours to explore the whole Valle dei Templi. I was blessed with lovely weather for most of the afternoon — it got a bit ominous as the day waned, but the rain held off until this evening — and the tourist hordes really weren't too bad. Once I was done with the valley, it was a bit of a hike on my bicycle, back up the hill to Agrigento — but I made it into town OK; and once there, it didn't take me too long to find a budget hotel at which to put my feet up for the night.