From my night's abode at Camping Bazia, this morning I cycled on, and tackled the winding road that leads up to Capo Tindari, and to the village and attractions at the top. It was quite a tough uphill ride — like Capo di Milazzo to its east, Capo Tindari is tall and steep — and a sprinkling of damp, drizzly rain along the way didn't help, either. However, once I reached the top, the weather improved, and the sights proved to be worth the effort. Not that I had a choice, anyway: not only is Tindari a major attraction in this part of Sicily; there's also no easy way around it. As well as some Greek ruins (which I skipped), Tindari is also home to a very impressive church, which sits right atop the cape (above the village), and which overlooks the cliffs and the sea beyond. 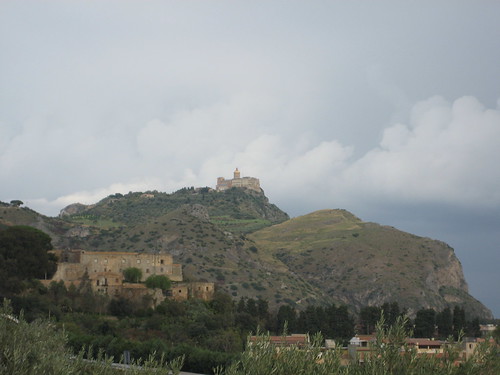 The mountain of Capo Tindari, and the church at the top. 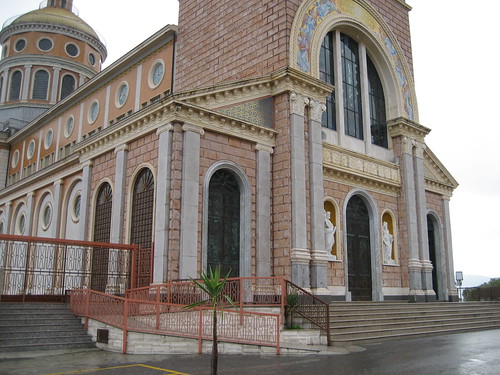 Impressive church atop the cape.

Apparently, this church is actually not that special — it's quite new, most of it was built about 50 years ago — and its only real significance is that it honours the apparition of a saint, that various people believe they saw here at the time. Anyhow, I went inside and had a look: it's quite nice on the inside as well; but there were several pilgrims praying in the hall, so I felt it prudent to abstain from taking pictures. The greek ruins of Tyndaris — also at the top of the cape — are not so obviously visible, and are apparently not that breathtaking anyway; so I didn't bother hunting them out.

Since I was camping rough last night, and I didn't have access to any bathroom or kitchen facilities, this morning I found myself running somewhat short of water. I'm carrying a large supply with me: but I used up a fair bit in cooking and washing-up last night; plus I've also been drinking no small amount of the stuff. Fortunately, there was a large public drinking fountain in Tindari village, so I was able to fill up there as much as I wanted. If everywhere in Sicily has free, clean, public drinking water available, that's going to make my life a whole lot easier — I can only hope that this will be the case.