Day two of my three-day rock climbing course stepped things up a notch. Yesterday was good fun, but nothing serious: just a few non-technical climbs on beginner runs, where I was teamed up with various people doing no-frills half-day sessions. Today, my venerable instructor Let taught me the most important and the most basic of technical climbing skills: how to perform top-rope lead climbing. It's very different to simply scrambling up carefree, with a rope above your head the entire time: more thrilling, but also far more scary.

For today's morning session, we returned to "Diamond Cave" — the place where we had yesterday afternoon's session. I was accompanied by a Finnish girl and a Canadian guy, who would be climbing alongside me (although not exactly "with me"), and who were on the final day of their three-day course. I observed a little bit of the multipitching stuff that they were being taught: it looks extremely difficult, and I can't believe that I'm going to be learning it myself in just one more day.

The main thing that I learned this morning was the technical steps involved in performing a top-rope lead climb. A top-rope lead is distinct from a regular top-rope climb, in that a regular climb involves simply climbing up a wall that already has a rope dangling all the way from the top of it; whereas a lead climb involves climbing a wall where there is no rope dangling from the top, and where your job is to bring the rope with you to the top. In lead climbing, the idea is to keep attaching your rope to one bolt after another, as you make your way up (the bolts are generally placed at intervals of about 5m, from bottom to top), thus providing you with at least something of a safety net, should you slip and fall.

Lead climbing is not a particularly complicated procedure: although as I learned last week on Ko Tao, I really haven't got a head for remembering equipment-use procedures. There are various steps involving the tying of knots, the attaching of clips, and the threading of ropes, all of which must be remembered to the letter, and all of which I struggled to retain in my head. Nevertheless, I managed to get the steps down-pat adequately to perform the climbs, and I successfully lead-climbed about three beginner walls this morning. It's an exhilarating experience, having to secure yourself at regular intervals, and climbing without the constant comfort of a taut rope ready to catch you at any second — but it's also rather insane.

The morning session was followed by another free lunch (fish today), and another little siesta spent lazing in the hammock amongst the mangroves. After lunch, Let began the afternoon session by leading me back over to the 'ol "1-2-3" wall, where I practiced a bit more leading, and where I tackled some of the harder routes on this wall, including a few overhang routes, and one route that led into a small cave. 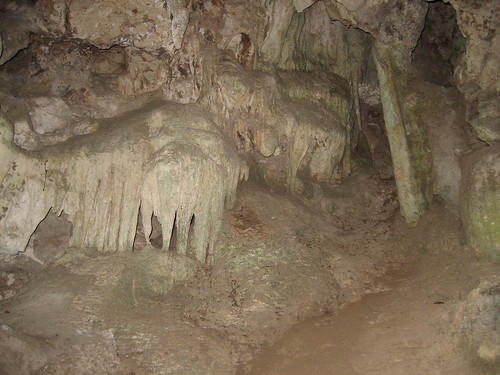 From "1-2-3", Let and I walked the short path that leads from Railay East, over to the final beach that I was to discover on Railay Peninsula, and what is easily the most breathtaking beach in the area: Phra Nang. Phra Nang beach is one of the most gorgeous natural sights on Earth: it makes tropical paradise TV commercials look like a pile of festering bogs. You just have to see it to believe it. One of the most famous sights on Phra Nang (apart from the overall vista of the beach itself) is the "good luck cave" on the southern tip of the beach: this small cave is a Buddhist shrine filled with innumerable statues and other ornaments; and those who visit it and pay their tributes at it are believed to receive good fortune in return. 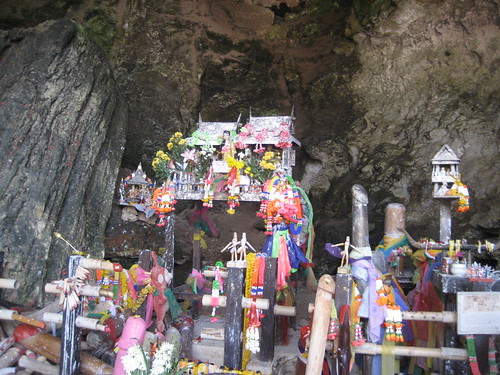 From the "good luck cave", Let then led me up to the other end of the beach (the north end), and showed me a path that leads up and into a large series of caves there. From the entrance to the deeper part of the caves, we had an incredible view of Phra Nang below us: there's a jagged island just off the beach, and it's connected to the mainland by a narrow sandbank, which slips above the surface at low tide, and which can be walked across in the afternoon. The entire area is also extremely shallow — you can wade out ankle-deep for at least 100m in any direction (this probably helps to explain the massive fluctuation in water levels around here, between high tide and low tide). 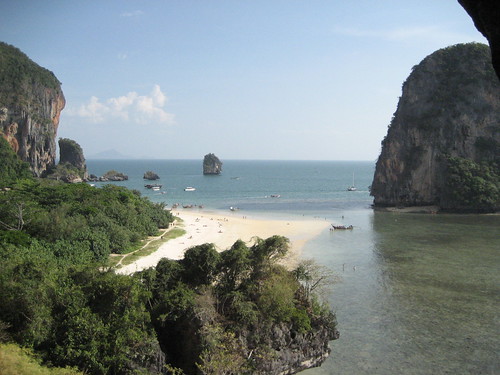 Let and I stopped to admire this mouth-watering view for a few minutes; and then we continued up, and made our way into the deeper and darker depths of the cave. In order to get through the cave, we had to climb up a series of rickety ladders in the pitch-dark: this wouldn't have been so bad, except that the only light to guide us was Let's extremely crappy little torch (wish I'd brought a good head-lamp with me). Anyway, it was only a few ladders, and then we were through, and we popped out on a small ledge on the other side of the hill, which overlooked the old familiar haunts that I now recognise clearly: Railay West, and Ton Sai beyond it. 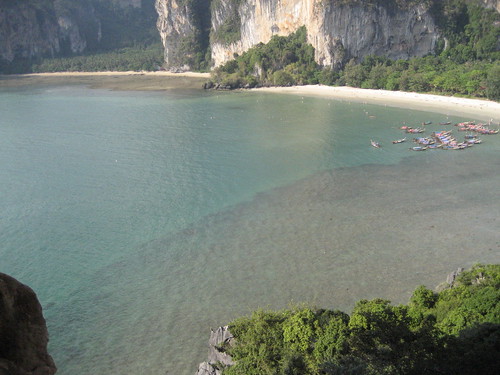 The big bay: Ton Sai beach on the left (rock-infested at low tide), and Railay West on the right.

From this commanding position, there was only one way forward: down. And so down we went, in the best way possible: by abseiling! After all the constant rock-climbing, abseiling was a welcome, non-strenuous relief — all I had to do was kick away from the rocks every now and then, and I just kept floating down. Plus, the same great view of Railay and Ton Sai stayed with me as I descended. The only unnerving thing was, I had a crazy Korean woman dangling about 10m above my head, who was attempting to climb an impossibly hard overhanging rock; and every few minutes, she'd let out a scream of despair, let go of the rocks, and fall for about 5m before her rope caught her. Thankfully, she never fell as far down as I was; but if she had, she would have fallen right on me. 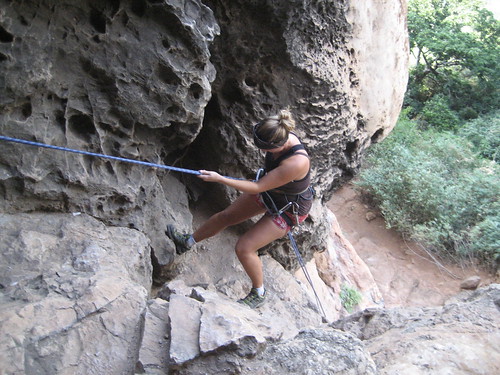 Some other people abseiling down, out of the cave.

I abseiled down first, with Let belaying me from the top. Then Let abseiled down as well, and I belayed him from the bottom. Finally, when we had both descended, Let pulled our long rope out from the top of the cliff, and caught it all at the bottom. Then, it was time for our final bit of climbing for the day. For his final climb (and his first one today, too), Let decided to do a "warm-up" on a rather challenging route, that led back up the cliff, part-way to the cave entrance. With me belaying, he scrambled up the difficult wall in no time, managing to find hand- and foot-holds in seemingly impossible-to-hold places. For my final climb (with Let belaying), I managed to lead once again up a reasonably hard wall: it was a gruelling climb, but I felt quite proud of myself when I successfully reached the top.

With those climbs over, day two of my Ton Sai rock-climbing was complete. The walk back to Ton Sai was much easier today, as I came prepared by wearing sandals instead of shoes, and as the ride was even lower and the rocks even dryer than they were yesterday. Once again, the day-long ordeal of climbing left me totally spent in the evening.