The Cohens of Vancouver

The Cohens are the family that I'm staying with during my 5 days up in Vancouver, and in Canada. They live in Richmond, which is (technically) an island south of the main part of the city, and which is also where the airport can be found. The Cohens are: Nanci (mom); Stuart (dad); Genna (sister senior, who I met last year in Sydney, through the AUJS Revue); Andy (younger bro 1); and David (younger bro 2). There is also Grandma (from Montreal), who's staying there at the moment (she came primarily for David's barmitzvah, which was 2 weeks ago). 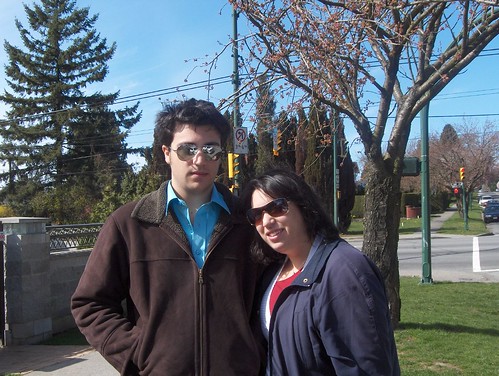 All of the Cohens are very nice, very heimische people. It's nice to be back in a house, with a family, for a little bit. They've been treating me real good so far, although this is just a regular week for them all, so nobody has a huge amount of time to spend doing stuff with me, in between all their work and study commitments. They're also all very musical: everyone in the house loves Broadway music (in particular); and everyone can either sing, or play an instrument, or act, or dance, or write, or do some combination of these. 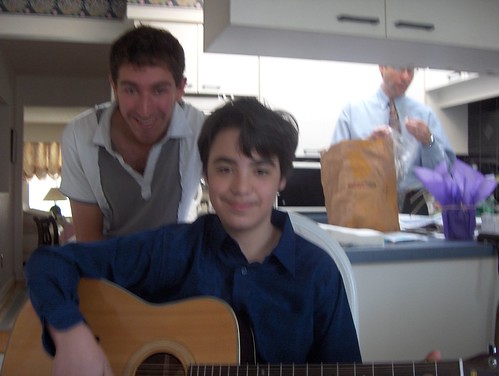 David playing guitar, and me providing a goofy smile. And most of Stuart’s head in the background.

I refrained from writing this post until today, because it wasn't until today that I met the Big Daddy himself, Stuart. This is because Stuart's been away in Toronto and Ottowa, and he just got back tonight. He's an (adjunct) professor in Climate Change, which I respect a lot, and he goes to quite a few conferences and panels and the like. Even gets himself in the paper every now and then.

Another thing about the Cohens: they are, as my mum would say, "froom, but not meshooga froom" (i.e: "religious, but not fanatical"). They keep kosher, but they will (for example) buy non-meat products even if they don't have a "kosher" label on them. And they try not to do too much on Shabbos, but they'll drive and answer the phone, if they have to. All up, they're very down-to-Earth and practical about the whole halachah (Jewish laws) thing. They reckon that living in Richmond, where there's almost no kosher food for sale, necessitates this. They also go to the local conservative shule.