We were entertained by several card tricks. We had more than a few to drink (I bought a bottle of Jim Beam yesterday, and it was received with glee in the Snowbunnys lounge this evening). And then, it was time for a CARDFIGHT! I never before realised just how fast and how hard you can throw a playing card: but as Jake and Mitch proved, they're actually quite aerodynamic little buggers, if you know how to flick 'em right (they hurt, too). So the Aussie brothers started flicking cards. And then everyone else started flicking them back. And after that, everything went way downhill. 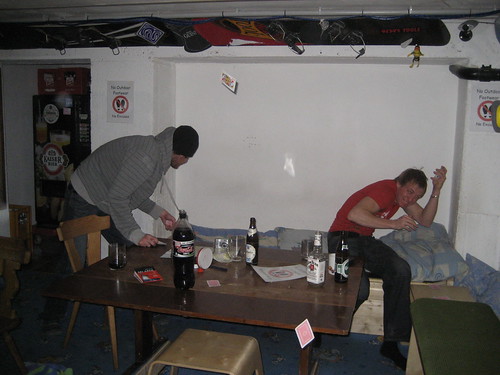 And by the way: whose cards were they, that everyone suddenly decided to hurl around the room? Mine! Well, that's it. They've now been played with, tricked with, graffitied on, and finally used as projectiles in a drunken free-for-all. I've had enough of 'em (the few of them that are left, after all that). I officially donate my deck of cards to Snowbunnys hostel — considering the state they're in now, you'd have to pay me to keep them any longer. But not to worry: they only cost about $1 in South America, and I can no doubt get some new ones for the same price when I reach Thailand. And the cardfight was worth it :P.