So long, and thanks for all the Chris

After almost two months of travelling together, eating together, freezing together, drinking together, endeavouring to find women together, and stinking together, the time has finally come for Chris and I to say goodbye, and to once again go our separate ways. Through Peru, Bolivia, northern Chile, and Peru once again, Chris has been an amazing travelling companion, as well as an amazing friend. Tonight, I leave Lima by bus for Huaraz; Chris, on the other hand, is flying to Bogota, Colombia, in two days' time. So — for the first time in quite a long time, now that I think about it — I'm once again all alone, and on the road in a strange and exotic faraway country. 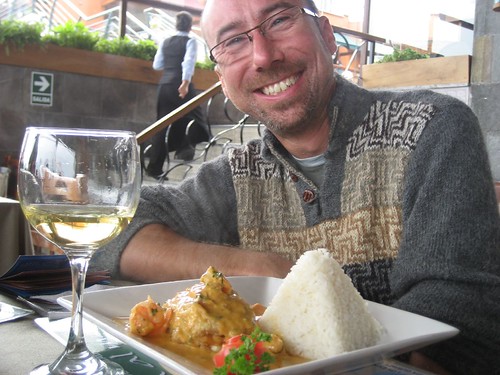 All the best for the rest of your travels, Chris!

Where to now, Chris?

Chris's plans are to spend a few weeks relaxing by the Caribbean beaches of Colombia; and then to head on to French Guiana, in time to witness a rocket launch scheduled for 14 August, at the European Space Agency's famous Spaceport in Kourou. After that, he's returning to Peru, to do the Inca Trail and to see Machu Picchu (he's booked in for September); and then, he has until November to see Chile, Argentina, and Brazil at his leisure. After that, it's back home to London. That's his plan, anyway.

My plans are somewhat different. I have about another two weeks to see Peru; and I plan to spend them heading north, seeing Huaraz, and then the north coast. After that, it's three weeks or so in Ecuador, doing crazy things like climbing volcanoes; and then I have a flight from Quito to Santiago, booked for 26 August. From that date, I have about six weeks to see Chile, Argentina, and Brazil; after which I fly out of Sao Paolo, and the South American leg of my grand journey comes to a close. I might see Chris again, down in Argentina or Brazil; but then again, I might not.

On having a travelling partner

Having a travel buddy has been a very different experience to travelling solo, and it's been both a blessing and a curse. One thing that I will say for travelling as a pair, is that it really does make booking activities easier. Suddenly, you find that you're able to very easily get into group activities, that have a minimum of 4 or 5 people per group. Suddenly, you have twice the bargaining power, and everything is available at a cheaper price. Suddenly, you're not worried about not being able to find enough people to make the activity or the tour happen: with two to start with, it's never a problem.

Accommodation is also much easier when you're travelling as a pair. In Bolivia especially, an awful lot of places seem to be lacking in actual, dormitory-style hostels. All that you can find is rooms with between 2 and 4 beds. Whenever you find yourself in a place like this, not being alone is both a huge relief (not staying all by yourself in a room), and a huge money-saver (they often charge per room, not per person). Just remember to always explain clearly that you don't want a matrimonio room: otherwise you'll find that you're sharing a bed (never happened, fortunately), and that's travelling just a little too closely together!

There are, of course, also inevitable downsides. You meet less people when you travel in a pair: suddenly, three's a crowd; and suddenly, there's no real need to go out of your comfort zone, and to make an effort at connecting with other travellers. I found that we often ended up getting friendly only with other people who were travelling in pairs: it's nice to meet other pairs of travellers; but it's also a bit limiting.

Maybe it's just the fact that I'm stingy with eating, and that Chris likes to eat upmarket; but in my experience, when you travel in pairs, you go to fancy gringo restaurants a lot more than usual, and you spend a lot more on food than usual. For me, it's been getting a bit ridiculous: I've barely had a non-gourmet-restaurant meal in the last two months! I mean, it's not that I don't like good food, and it's not that I can't afford it (unlike when I get to Europe, where a can of baked beans will cost as much as a char-grilled steak costs around here); but personally, I like to eat local food, with local people, whenever I can. And that just hasn't happened lately.

And finally, there's the one big, inevitable downside, that catches up with all travel buddies sooner or later: you get sick of each other. I can't speak for Chris: but personally, I think that the two of us are quite well-suited to putting up with each other; and I think that we've survived two months of being in each other's hair pretty daym well. I don't think that there are many people on this Earth, with whom I could handle an extended period of travel-buddying; but Chris is one of them. I'm naturally a fairly solitary person, and I believe that Chris is as well.

If there's one thing I've learned from this, it's that before long, you're going to have heard all your travel buddy's stories at least 10 times; you're going to have laughed at all his jokes at least 10 times (with only the first two or three times being genuine laughs); and you're going to have compromised on where to go and on what to do at least 50 times (and these can be as small as what restaurant to go to, or as big as what country to go to). But if you can still enjoy each other's company, and you can still find things to talk about, after all this, then you know you're going well. It's just a matter of finding someone that you really get on with, and that you'd have a very hard time hating.

Note to Chris: I know, I fart a lot. It's just the way I was born (bit of a family tradition, actually). Awfully sorry, and thanks for putting up with it, mate. :P

In summary, it's been a blast travelling with a partner; but I think that both of us have had just about enough of it, and I think that we're both very much ready to once again go it alone. It will be good to once again do exactly what I want, to sleep when I want, and to eat where I want. Nothing makes life interesting, like being around totally different people, every single day. And there's nothing like being a truly free spirit. That's what travelling's all about: freedom, and adventure.

‹ Transformers at Larcomar Welcome to Huaraz, nothing is forever ›
Filed in: Lima • Reflection • Farewells