Seven (or "Sevens") is one of the easier card games I've ever played. Gameplay is simple enough: people start by putting down sevens, and from there you put down cards (of corresponding suite) in order from eight to king, and from six to ace. First person to get rid of their hand is the winner. Sorta like playing dominoes with cards. Late this evening, at the waterfall camp where we spent the first night of our Doi Inthanon trek, myself and some of the other guys played a few games of Seven. The game is really too civilised and boring for my liking (don't forget, I've been playing card games with such names such as "S$#%head" and "A$$hole" all year), but it's a good time-passer nonetheless. 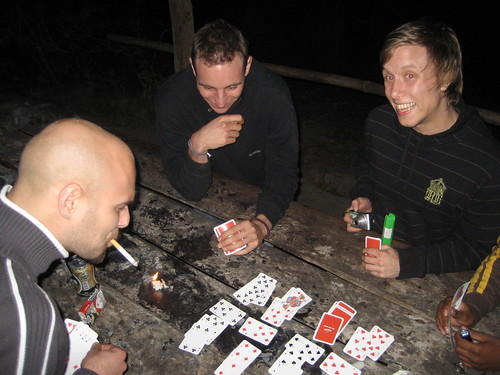 Playing Seven with the German guys and the Swedes.

‹ To the camp by the falls The Poms and the Canadians ›
Filed in: Doi Inthanon • Passing time • Games