If the morning trek to Erice was hell on ice, then this afternoon's cruise down the Sicilian west coast was heaven with icea tea. Really, after lunch it couldn't have got more pleasant. From Paceco, I cut over to the quiet coast road that runs parallel to the main highway (and the autostrada), and cruised through what is apparently known as "The Salt Road". Signs on the road claimed that this stretch of road had been nominated for some "European prize in outstanding culture and environment" — I wouldn't go that far; but yes, it is a scenic area. And with a gentle coastal breeze, abundant sunshine, and light casual traffic to keep me company, I couldn't have asked for a better way to brighten up a tough day. 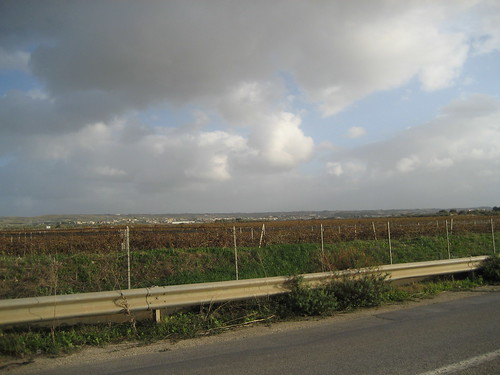 I don't know why it's called The Salt Road — personally I saw no evidence of salt whatsoever, particularly compared with the salt I've seen elsewhere this year — but apparently there are natural saltpans near the road. As the Marsala area is Sicily's prime wine-growing region (and as Sicily has recently become one of the prime wine-growing areas in Italy), what I did see was a lot of vineyards, and a lot of wine-related tourism stuff (B&Bs, wine-tasting estates, "agriturismo" places, etc). In contrast with what I've seen heretofore in Sicily, this coastal western area is low and flat; and the vineyards sprawl out to the sea in one direction, and to the horizon in the other.

I also passed by the island of Mozia this afternoon. Just off the coast from the salt road, Mozia is a big tourist attraction, and is apparently home to a few ancient ruins. However, I didn't bother to go down to the docks, or to investigate catching a ferry to the island — just admired Mozia from a distance. Plus, I passed by an airfield just near the salt road, which seems to be used for military purposes: a fighter jet was zooming by overhead for about 15 minutes; lucky it wasn't armed, as a lone Aussie cyclist would no doubt have been too tempting to resist for target practice.

The salt road took up most of my afternoon — as it wound its way through flat vineyards and little villages, parallel to highways and train lines nearby — before it finally ended in the city of Marsala. I found Marsala to be a charming place — and as it was clearly chockers full of accommodation and good food, I was quite tempted to spend the night here and to put my feet up — but I resisted the allure, and rode straight through it. My map indicated that there was camping available, on the coast just south of the city, and that was where I was headed.

‹ The Paceco bum A field near Marsala ›
Filed in: Marsala • Cruising • Islands • Sigh of relief • Wineries