After Jesus and I finished our excursion to Pisac this morning, we continued west through the Valle Sagrado ("Sacred Valley"), to the town of Urubamba, for the afternoon. Urubamba's a cute lil' town as well; but it's much quieter than Pisac, due to the lack of a big market, or of any major ruins nearby. However, it made a nice spot to grab some lunch, in our second trendy café for the day; and this time over a game of (my newly purchased) ludo (close game — but Jesus won). We really were taking our time and chilling out at every opportunity today. Ah well, that's what Sunday's for, right?

Anyway, the chilling came to an end after lunch, when we began our little hike up to the Salinas. The Salinas is an amazing hillside salt mine, constructed over 1,000 years ago by pre-Incan civilisation, and later used by the Incan Empire. We caught a combi out of Urubamba for about 10 minutes, and then got off, and began walking the trail up the hillside. On the way up, there were some quite spectacular views of the mountains all around. 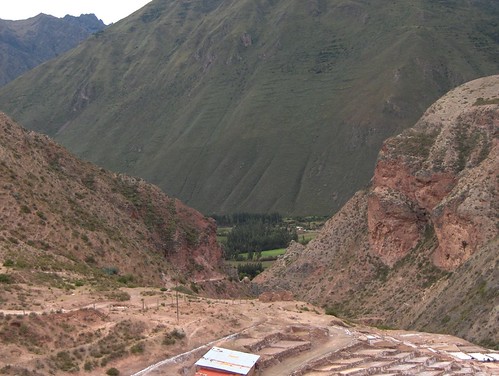 Nice view heading up to the Salinas.

It took about ½ an hour to reach the Salinas, and if you know how to get to them (which Jesus did — but it's not really a clear route or anything), it's well worth the visit. They certainly are a unique and an ingenious construction. Literally hundreds of small, rectangular pools — enclosed by stone bricks — built into the entire hillside. Each pool is a miniature salt mine. When it rains, the water comes gushing down the mountain, bringing with it lots of salt. The water and the salt collect in the pools, and the salt is then gathered by the miners. 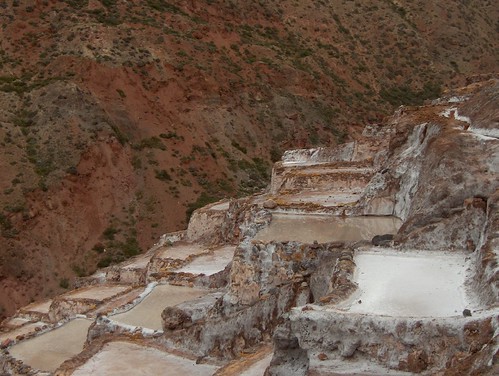 Attention staff: could the miner in pool 368 please make your way to the front office, where your hat is waiting for you.

The Salinas pre-date the Incas, but they were used heavily by the Incan Empire. And in fact, the mine is still in operation today, providing large quantities of salt to Cusco and beyond. There weren't that many tourists around when we were there, but there were a couple of people at work in the pools.

Once done at the Salinas, it was starting to get late, and so we decided to head back to Cusco. We had some difficulty getting a (10-minute) ride back to Urubamba: it took us about 20 minutes, in the dark, to finally hail down a shared cab. When we got to Urubamba, we jumped in another shared cab (marginally more expensive than a bus), which took us all the way back to Cusco.