I didn't make it to Sacsayhuaman (a.k.a. "sexy woman") or to Qenko last weekend, when I got lost in the mountains; but I finally reached them this afternoon. Myself, Monika, and Juan Carlos wandered up from central Cusco to these nearby Incan ruins after lunch today, and we explored them at our leisure. As with Tambo Machay (the only ruin I did reach last weekend), they're nothing compared to Machu Picchu; but they're a convenient day trip, and they're beautiful and interesting nonetheless.

Sacsayhuaman is the closest set of ruins to Cusco — it's literally a 20-30 minute walk up the hill, from the Plaza de Armas (central square of Cusco). On the way up, you pass Iglesia San Cristóbal (San Cristóbal church), which has a broad paved square outside of it. From this square, you get a commanding view of downtown and greater Cusco, which is spread out below you in all directions. 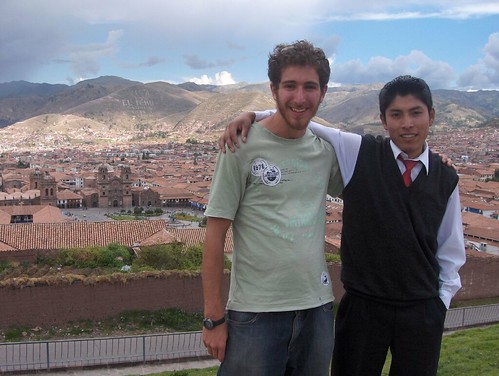 Myself and Juan Carlos at the San Cristóbal lookout.

We walked up to the square, and then continued walking up the hill, to Parque Nacional Sacsayhuaman. When we got to the entrance to the ruins, there was an official checking everyone for their boleto turístico ("tourist ticket" — for entry into many museums and ruins around Cusco). For myself and Monika, our tickets were due to expire today, so we were glad to use them before they do expire. For Juan Carlos, no ticket was needed (as he's a resident of Cusco) — he forgot to bring his resident ID, but the guy was nice enough to believe him and to let him in.

As many people say, Sacsayhuaman is quite a beautiful set of ruins. It's basically two hills that stretch out parallel to one another, and a flat "valley" in between. The hill on one side is covered in several levels of teeth-like zigzag walls, and the hill on the other side is also fortified with many walls. According to legend, the city of Cusco is supposed to be in the shape of a puma, and Sacsayhuaman is the mouth of that puma. 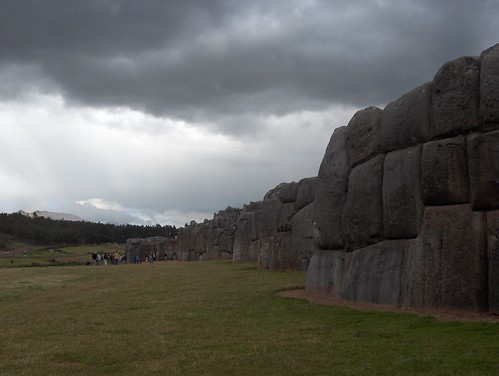 The famous “teeth” of Sacsayhuaman.

The three of us climbed first to the top of the heavily zigzagged hill, from the top of which we had another impressive view of the city below. It's not a very tall hill, but it is long, and the "teeth" are built into the entire inner side of it.

Once done with one side, we climbed back down, walked across the flat expanse of grass, and ascended the other hill — the other half of the puma's mouth. 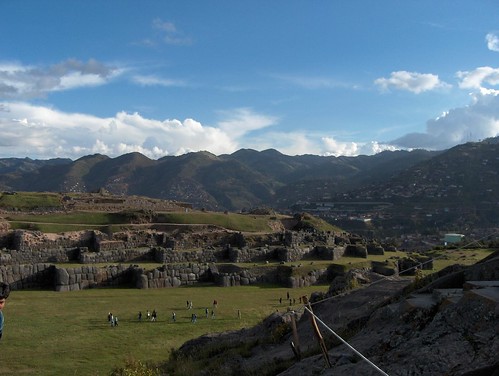 The two sides of the puma’s mouth, and the valley in between.

Sacsayhuaman was pretty busy with tourists when we went, and I believe it's like that all the time. Despite the ruins being such a short walk from Cusco, and being self-explanatory (if you bring your Lonely Planet — and who the hell hasn't got one of those?), most people still chose to go in big groups, with tourguides and shuttle buses. I guess a lot of people are rich and lazy.

From Sacsayhuaman, it was only about a 15-minute walk for us, along the ridge overlooking Cusco, to the ruins of Qenko. This is a smaller and less spectacular Inca site, consisting of a big mound of rocks, with some semi-caves to explore inside, and with a special sundial and lunar-significant astrology temple on top. Because Qenko is so small, it was totally packed with tourists, and there was barely room to move around. 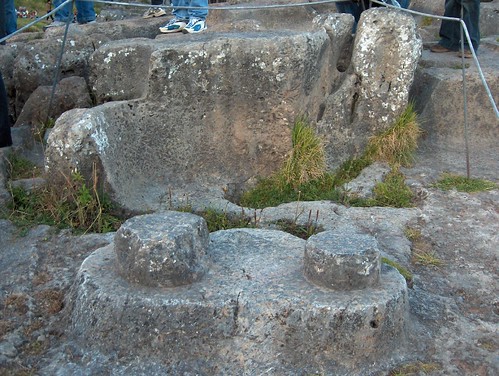 Sundial thingy on top of Qenko.

Once we were done at Qenko, it was starting to get cold and dark; so we hopped on a combi back to the city. Nice little afternoon tour — and I'm glad I used my ticket before it expired!