Romp in the Madidi jungle

Our activity for this afternoon, after arriving in the jungle near Rurrenabaque, was to be taken on a romp through the jungle around our campsite, and to try and sight some animals. Sighting animals is much harder in the jungle than it is in the pampas, because the animals are all hiding away up in the trees, rather than hanging around in plain sight around a big river. But with a good guide, and a bit of stealth, it's possible to catch a glimpse of a few of them.

The first animals that we saw — with some difficulty — were the macaws. As any reader of pirate stories (or of the Cairo Jim adventure series) would know, a macaw is a beautiful multi-coloured bird, native to the Amazon jungle of South America, and blessed with an extremely long life. However — according to our guide — unlike parrots, and contrary to popular belief, macaws actually can't talk. The macaws were quite high up in the trees, but we managed to see them nonetheless. 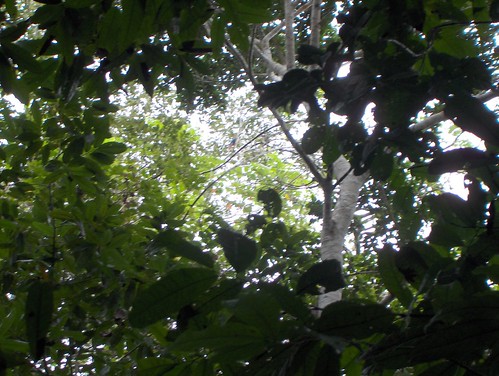 Can you see the macaws?

We also saw some howler monkeys, swinging around high up in the trees, just before the day (and our romp) ended. Howler monkeys can be found in the jungle just about everywhere in this part of the world, all the way from southern Mexico to central Brazil. And they get their name from their practice of howling very loud and very deeply, at dawn and at dusk every day. This practice made them much easier for us to find. 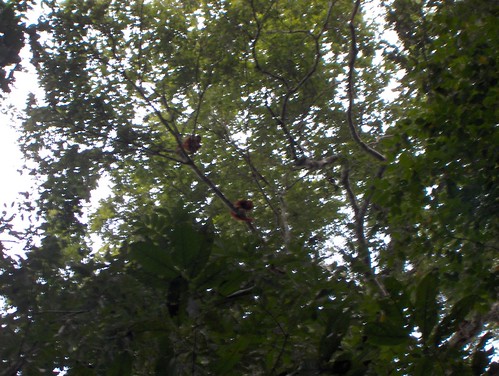 Howler monkeys up in the trees.

Apart from the animals, the afternoon's romp involved simply doing a lot of walking, and being shown and lectured as to the many exotic trees and small plants in the jungle, and their special properties. There are some really tall trees in the jungle, as well as trees that are hollow on the inside (due to being killed by strangler vines).