Today was the third and final instalment in my three-day climbing course, and it was one hell of a daunting conclusion. The main topic of the day was multipitching: that is, learning to ascend walls that are too high to climb with a single rope (such walls are more than 50m), and/or that consist of multiple sections, each of which has a different "pitch" or angle. Multipitch climbing is an extremely complex procedure, as it involves a pair of partners taking turns at belaying each other up and down (multiple times, depending on the number of sections that the wall has), switching yourself between various ropes, securing ropes in such a way that they can be switched, and learning a whole heap of new knots and rope configurations. It is, in my opinion, far too complicated to learn in one day; and it's also quite unnecessary to learn, unless you're already a strong and experienced enough climber to actually tackle multi-pitch walls. I barely remembered a quarter of the details of what I was taught today; but nevertheless, it was worthwhile being exposed to some of the more advanced techniques in rock-climbing, and it was interesting to learn how the pros do it.

Instead of my usual instructor, Let, today I was taken out to the walls by Yu. Yu speaks much better English than does Let; but he's also much more strict and demanding, and he expects an awful lot out of his students. Personally, I felt that he went a bit too hard on teaching me all that I was meant to learn today — I preferred Let, and I have no idea where he went, and why he couldn't stay with me today. Anyway, Yu's a friendly enough guy — as long as you don't stuff-up your climbing too much — and I did get a lot out of today's sessions with him.

For today's morning session, we went over to "Diamond Cave", the same old site just north of Railay East beach. Apart from one top-rope lead climb — which I performed so that Yu could be satisfied that I'd learned it properly, back on Thursday — no climbing took place here at all. It took all morning for Yu to explain to me the complex procedure that it multipitch climbing, and for us to conduct a small simulation practice of it, on the bolts at the bottom of the wall. It was a tonne of information to remember, as well as a seemingly neverending series of intricate hands-on steps. By the time lunch came around, my brain was fried to buggery. The Pad Thai for lunch, fortunately, was fried to perfection :P.

In the afternoon, we headed over to the (now quite familiar) "1-2-3" wall, where we went through our first (and my only) proper multipitch practice. Yu did the leading, and the barking of orders; and I did the obeying, and the struggling to keep up. It wasn't a terribly difficult climb that we multi-pitched on — as it was a practice run, it certainly wasn't a climb that actually required the use of multi-pitch techniques — but remembering all the steps was more than enough work to wear me out. I barely retained the procedures in my head while we were performing it; and once we were back on the ground, it was only about 5 minutes before the entire convoluted lot of it had been swept clear from my mind. It did feel good to reach the top, though. 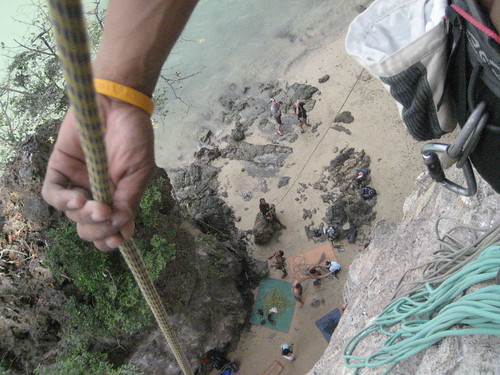 Multipitching: view from the top.

Yu only put me through the gruelling multipitch practice once — after that, he could see that there was no point in practicing it again, as I wasn't going to remember much more the second time than I had the first time. So I just spent the rest of the afternoon practicing my top-rope leading, and tackling a few more of the runs on the "1-2-3" wall. Most of the runs were good fun; but there was one particularly annoying one, which began with an enormous obtuse overhang, and which unfortunately defeated my puny upper-body-strength abilities. That overhang really tickled my temper: I tried to surmount it about five times, but each time to no avail. I'll remember that rock — and one day, I'll come back to Ton Sai, and I shall have my vengeance! 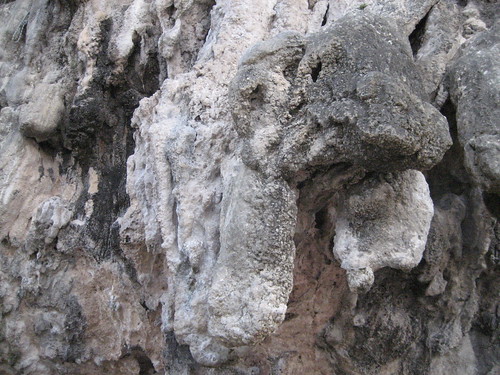 Watch out, evil overhang: I’ll be back.