For my final full day in Baños, I decided to try out what the town has to offer, in terms of river rafting. Sadly, due to the excessive amount of recent rain, the water levels are currently too high to do the full-day, Class IV-V rafting that I'd like to do. However, half-day Class III-IV rafting is still being offered. So I signed up for this package (with one of the many rafting agencies in town), and this morning I headed off to the Río Pastaza for two hours of rafting fun. Not the greatest of my three rafting trips to date (the ones that I did in Cusco were better), but better than nothing.

Our group of 21 people set off from Baños at about 9:15am this morning, and headed east along the road to Puyo (a road that I already know quite well). The majority of my comrades for the trip were young Froggies, most of whom were all together in a big, French tour group (yet another one!). Only four of us were "silly English speaking tahrts": myself; Mike, an English guy; and Esther and Evelyn, two Dutch girls. Naturally, we stuck together for most of the trip.

It was a fun ride, on one of the "Chiva" tourist buses that they use around here: a truck-like vehicle with rows of benches, and a nice open-air design. We zoomed through the long, dark tunnels of the Puyo road (which you avoid by switching to the old unpaved road, when doing the bike ride), and reached our destination by the river, which was about two-thirds of the way to Puyo. Then, we unloaded, got dressed in our rafting gear (helmets, wetsuits, lifejackets, etc), had the usual 10-minute explanation of rafting basics, and set off down the river.

Our two hours of rafting were good fun, but not nearly as exciting as my previous two trips. There just weren't any reasonably challenging rapids at all: most of the way, we just floated down; and for the few choppy and rapid sections that we did have, we were lucky to even get splashed. No dives down really tall waves. No spots where we needed to "get down" (i.e. all crouch down in the middle of the raft, and hold on for dear life). And virtually no danger of anyone falling out, or of the raft flipping, at any point. A bit disappointing, really.

We also got stranded on rocks a few times — big flat ones that were close to the surface. Don't know why our guide let us get onto them (maybe to avoid certain bits with "real" rapids): but several times, he had to get out and push us off these rocks. He also asked us to "jump up and down" in our spots on the raft, in an effort to dislodge the raft from the rocks — first time I've ever been asked to do this, while on a raft. All up, I wasn't that impressed with our guide: he directed us poorly through the rocky and the rapid sections; he seemed unsure of what to do at many times; and worst of all (and unlike all my previous rafting guides), he lacked charisma and a sense of humour, and he struggled to engender the camaraderie that I've come to know and love with rafting trips.

One interesting observation about this rafting trip, however: for much of the way down the river, we heard mysterious banging noises coming from the cliffs to either side of us. Sounded a lot like fireworks (or gunfire — locals having some fun potshots at the gringos? :P) — but we soon realised that it was actually a natural noise, caused by the sound of the river waves bouncing off the cliff walls. A bit eerie, but it was a cool little feature of the river.

When we finished our trip down the river, and disembarked, I couldn't help but exclaim: "that's it?" Seemed very short, and very uneventful, as rafting trips go. Anyway, once we were all ashore, the agency folks were kind enough to give all of us a complimentary can of Pilsener beer. Sadly (and unlike the fine people at Mayuc in Cusco), the Baños rafting people don't take photos for you, while on the river; and since I don't have a waterproof casing for my own camera, I didn't get any shots of us doing our thang. Only managed to squeeze in a few shots at the end, after we'd gotten ashore. 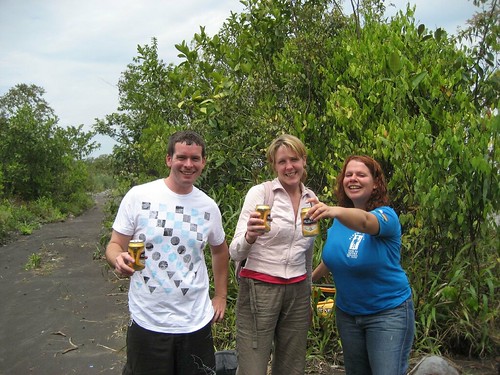 Enjoying our beers: Mike, Evelyn, and Esther (left to right). 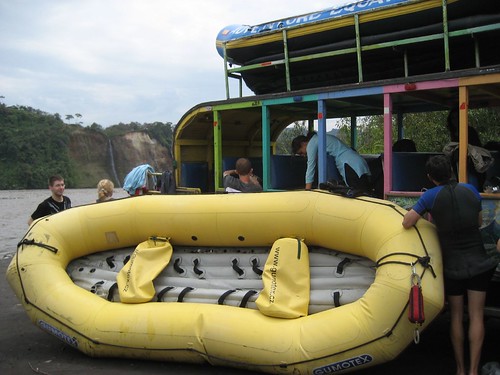 One of the rafts, sitting next to the Chiva bus.

We changed back into our clothes, packed away the rafting gear, and then set off on the Chiva bus once more. The bus took us up the road about 10 minutes, to a little restaurant near the town of Shell. At the restaurant, we were treated to a great lunch (all on them), and we were able to have a relaxing, post-rafting chat. Then, it was straight back to Baños, for an afternoon's rest and siesta.