Reunion with the Sairee crew

First night on Ton Sai. Ko Tao is now behind me, and it's been a week since I saw any of my diving friends from Sairee. And who should I happen to bump into — walking right past me on the beach — but Caroline! Turns out that she's been here — along with all the Canadian dudes from the course — for a few days. Naturally, I was obliged to join my old buddies for a few drinks tonight: especially since it's their last night in Ton Sai, with their destination for tomorrow being the island of Ko Phi-Phi. It seems that there's only one thing, and one night, that everybody remembers about me from Ko Tao — when the crew first saw me this evening, they all greeted me with: "hey, it's vomit boy!" Uhhh... yeah, thanks guys :\. 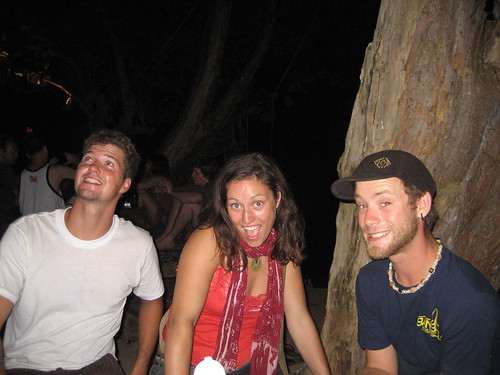 We meet again, Sairee: reunion with the diving crew.

To celebrate — err... stuff... — this evening we hit a few of the beach bars, a multitude of which line the waterside at Ton Sai. We started with a few beers, and then progressed on to the inevitable buckets; a dangerous progression, if ever there was one (fortunately, no vomiting or passing out tonight). We also enjoyed the live music special, that was being performed at the Chill Out bar later in the evening: good musicians, good tunes, good times.

Caroline and the Canadian boys are headed to Phi-Phi tomorrow, where they'll be staying for a day or two. Rendez-vousing with these folks was also a good opportunity to catch up on the goss, re: the rest of the Ko Tao crew. Alex headed to Phi-Phi straight after finishing the dive course; and he's now in Bangkok, and is already about to fly over to Sydney. Another week or so, and I'll be joining him. Chris, apparently, is still exactly where I last saw him: at Ban's, on Sairee, doing more dives. He's become hooked on diving, and he wants to stay on Ko Tao and keep diving for the rest of his time in Thailand. Good luck to him, I say. Personally, I've decided that Thailand has plenty to offer above the surface, without all the hassle of checking out its submarine depths as well.