It seems that Jake and Mitch, Kitzbühel's favourite two Aussie boys, never cease to entertain. The "red card black card" trick looks simple, but leaves you in awe. The way it works is as follows: the trickster deals the entire deck face-down into two piles, and picks a volunteer. Each time that the trickster deals a card, the volunteer says either "red" or "black"; and the card gets accordingly dealt to one of the two piles — the "red" pile, or the "black" pile. Exactly halfway through the deck, the two piles are swapped — i.e. all "red" cards now get dealt to the black pile, and vice versa. Through the entire dealing process, neither the trickster nor the volunteer sees any of the cards: the calling out of "red" or "black" is a completely random choice, decided each time by the volunteer. At the end, the trickster turns over and fans out both piles: and unbelievably, they're both exactly half-red (all together) and half-black! Check out the video.

The boys refused to tell us how the trick works, and nobody could figure it out. How the hell do they do it? Seems like sheer magic to me. How can they even guarantee that the volunteer will say "red" or "black" exactly the right number of times; let alone guarantee that each time they say it, the card is actually the correct colour? I'll have to study the footage in-depth, before I have even a hope of understanding it. Anyway, they said that it is a difficult trick, and that it took them quite a while to learn: they claim to have learned it while working as bricklayers, for a builder who's also a professional magician part-time, and who taught them all sorts of tricks during their lunch break every day. They also know another cool trick: a lot simpler, it merely involves flicking your thumb very quickly, to make one card disappear and another appear (just a matter of practice, in order to become dexterous enough to pull it off). 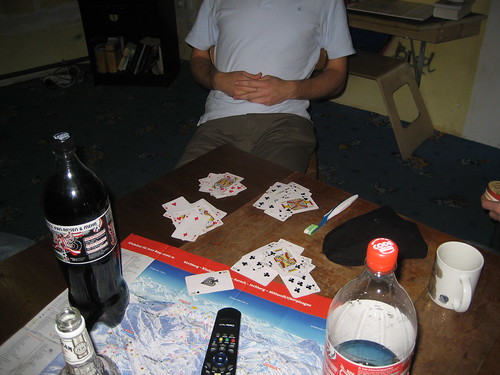